Max Bazerman spoke to Tuck students about his new book. 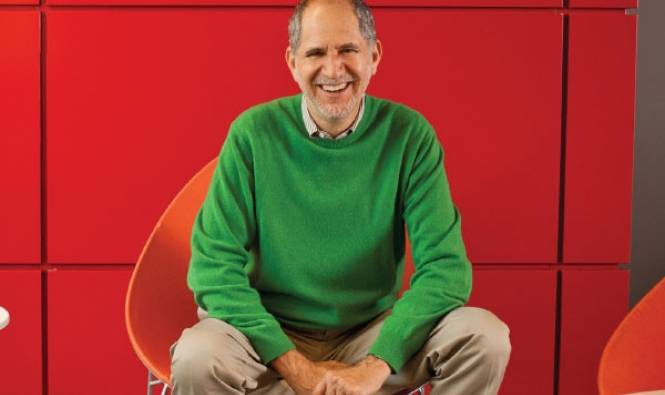 Max Bazerman spoke to Tuck students about his new book, "Blind Spots: Why We Fail to Do What’s Right and What to Do About It."

Max Bazerman, ethicist, author and Harvard Business School Professor, is testing the attentiveness of a roomful of Tuck students. He’s showing a 30-second film clip – “the greatest film ever made”, he claims. On screen, two teams of basketball players bounce balls to one another while the students carefully count the number of passes.

When the film is over, Bazerman asks the students to share their totals. After everyone has weighed in, he asks, “Did anyone see the woman with the umbrella?”

A replay clearly reveals a woman slowly strolling right through the action.

Bazerman says that only about 5% of the uninitiated ever catch the phantom woman. When asked why they missed her, viewers explain, “I was busy watching for something else.”

That’s a dominant theme of “Blind Spots: Why We Fail to Do What’s Right and What to Do About It,” co-authored by Bazerman and Ann Tenbrunsel. Bazerman calls the phenomenon “bounded awareness” – systematic avoidance of information in the environment that we should be paying attention to.

This lack of broad awareness becomes increasingly serious when extended to “bounded ethicality”: ways in which we fail to act ethically despite our best intentions, because we have failed to notice something. This “in-attentional blindness” becomes an ethical issue when the failures of the present foist harm upon future recipients. Bazerman cited the scenarios of climate change, overharvesting of fisheries, and the disasters resulting from Hurricane Katrina as illustrative of such harmful outcomes.

While most efforts to teach ethics have focused on dilemmas where people are aware that an ethical issue is present, Bazerman’s work has focused instead on situations where there is a lack of awareness about an ethical dilemma. “There is something missing in our ethics education in professional schools,” Bazerman told the students. “We need to augment focus on how to get people to even notice the ethical implications of what they’re deciding. We should focus ethics education on the psychology of the behavior of typical MBA students, not on the intentional unethical behavior of rare circumstances.”

Bazerman’s recommendation for combatting bounded awareness is to consider how choices are framed, and to offer people many options. “With multiple courses of action, we deliberate more. We become more utilitarian. How we present options changes people’s decision making – and produces more ethical outcomes.”

Bazerman, who is Jesse Isidor Straus Professor at the Harvard Business School and author, co-author, or co-editor of nineteen books, was hosted by the Center for Business & Society as part of its ongoing ethics programming. Throughout the year, the Center offers talks with visiting experts as well as small group discussion sessions to prepare Tuck students to become responsible business leaders with the ability to recognize ethical issues when confronted with them.