Facing a Sobering Fiscal Future, with a Smile 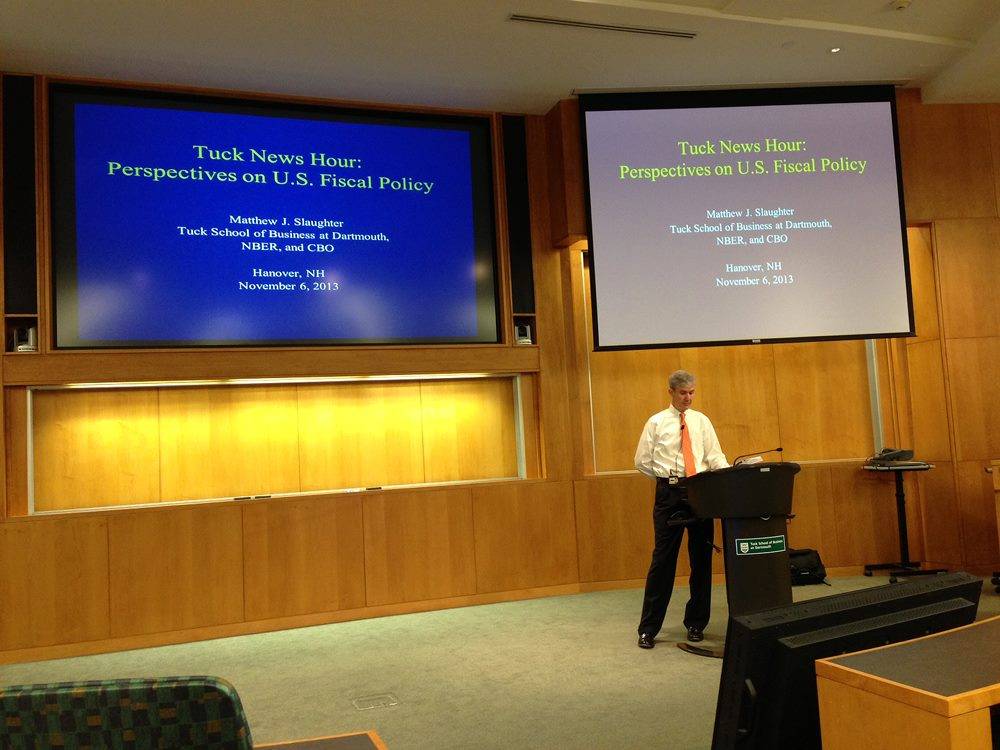 In the world of Winnie the Pooh, the high-bouncing character Tigger approaches even the most daunting challenges with exuberance and optimism.

“We’re going to talk about fiscal policy in the U.S. so I wore my orange Tigger tie,” professor Matthew Slaughter, the Signal Companies’ Professor of Management and associate dean for faculty, told attendees of the year’s first Tuck News Hour on Nov. 6.

Acknowledging the bleak realities of an America scarred by economic turmoil, government shutdown, and grim financial projections, Slaughter counseled students not to take a defeatist perspective on the country’s—and world’s—fiscal future.

“Don’t walk out of here dour,” he said. “This is a huge opportunity, not just for you to do great things in the private sector, but to really have an impact on the broader world.”

Drawing on the most recent Long-Term Budget Outlook Report he and other members of the Congressional Budget Office (CBO), a nonpartisan economic advisory panel, compiled, Slaughter discussed the basic tension every government faces in staying solvent: spending obligations versus tax revenue, which necessitates hard choices and difficult trade-offs.

These compromises become more difficult as we now enter what chairman of the U.S. Federal Reserve Ben Bernanke famously called “the fiscal calm before the storm.” The most threatening clouds on today’s U.S. economic horizon are the dual, interrelated explosions in the number of older adults as well as in health care costs and spending.

As the expense of entitlement programs like Social Security, Medicare, and Medicaid skyrockets, public expenditures for basic science, research, and infrastructure have hit their lowest levels since World War II. With no easy answers and enormous need all around, Slaughter warned that the desire of many legislators not to continually raise the debt ceiling was “shockingly irresponsible.”

“Something’s going to have to give—we’ll have to find revenue raisers or be beholden to creditors. If we don’t want to gut investment spending at the public level, we’ll have to scale back on what Medicare and Medicaid promise,” he said. “That’s the basic trade-off the country faces, barring some really optimistic things that you guys could help figure out, like controlling the rate of growth of health care costs.”

Stressing the universality of basic economics principles, both internationally and domestically, Slaughter also discussed how many state and local governments are struggling with major pension shortfalls and potentially unsustainable health care promises, including the recent bankruptcy of Detroit. Despite such troubling examples, and even though today’s federal government is more indebted than it ever has been in history, barring a few years in and around World War II, globally the U.S. is still seen as a relatively risk-free, low-interest investment compared to the cautionary tales that have played out across Europe, most notably in Greece and Portugal.

Still, the overall American fiscal state of affairs hits at issues both micro—U.S. households are saving less money—and macro—about half of the government’s outstanding debt is held by foreign rather than domestic creditors—that combine to sap our national economic resilience.

Tempting fate in this way can be dangerous, Slaughter said, describing how, throughout the history of the U.S. and of the world, deficits and debts traditionally spike due to natural or human-created disasters like war, only some of which can be predicted.

“Part of what people reasonably worry about today is we clearly have a lot less fiscal wiggle room than we did five years ago to be able to take on things that historically the U.S. government has felt it had to for the safety and welfare of its citizenry,” Slaughter said.

Despite America’s current economic imbroglio and disheartening fiscal projections for the future, however, Slaughter sees prospective solutions, true to his self-proclaimed “Tigger” nature, via political and private sector leaders who have the courage to confront hard truths.

“Adjusting these scenarios isn’t that difficult in terms of the economics—these are not insurmountable problems. The scarcest resource is leaders who will talk about the trade-offs we face and how we’re going to address them,” he said. “That’s exactly why all of you are at Tuck right now, to go back out in the world and provide that kind of leadership.”