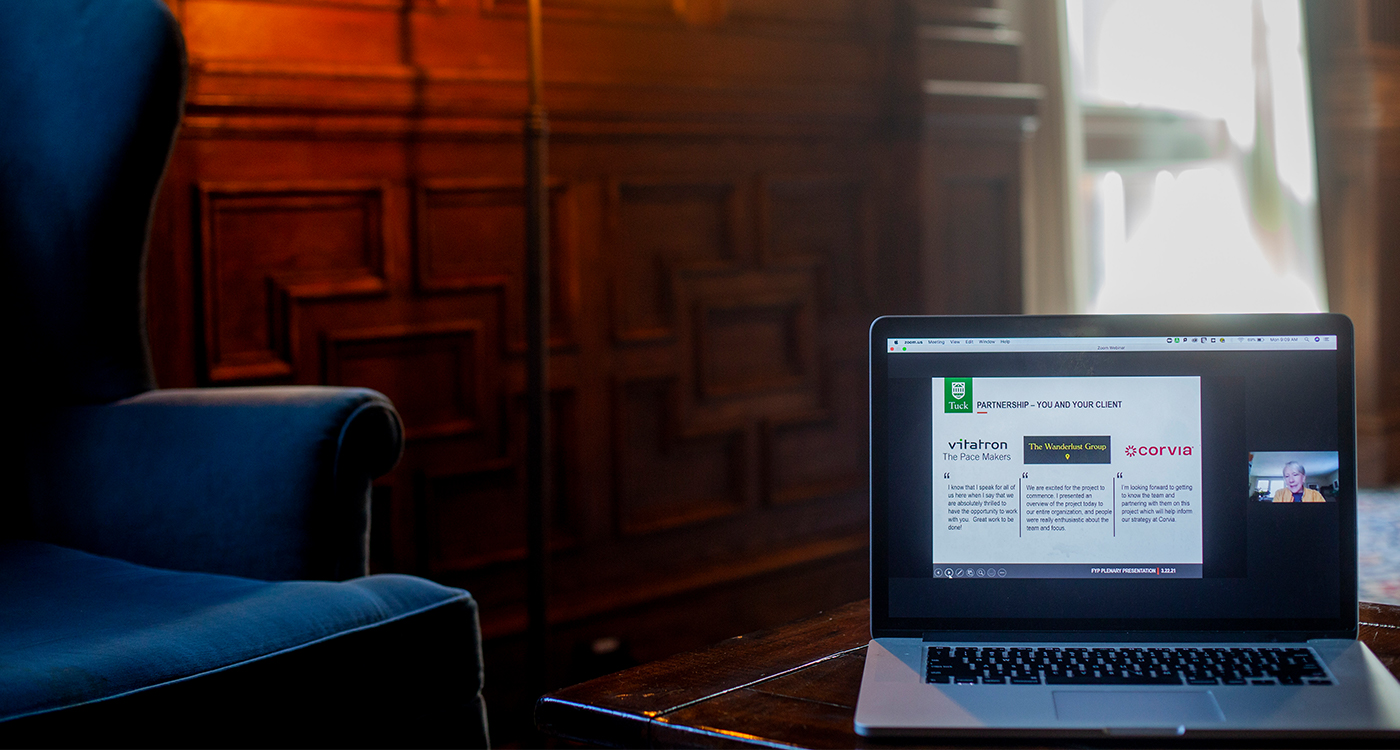 First-Year Projects at Tuck kick off every spring, leading up to summer internships.

Students in the Tuck Class of 2023 are only a few weeks into their MBA experience, but it won’t be long before they have to choose a First-Year Project (FYP) to do next spring.

The FYP is students’ first chance to solve real-world business challenges armed with the knowledge and skills they obtained in the Core curriculum. As in years past, they will have a wide range of organizations and projects to choose from. Last year, T’22s were offered 83 projects; 56 of them were staffed. Twenty-three of the 2021 FYPs were self-sourced or “e-FYPs,” where students can recruit a company or organization with which to work, or put together a team to work on their own startup business.

FYPs last spring covered the gamut of the business world, with 21 percent in the consumer space, 16 percent in biotech/pharma/healthcare, and 9 percent each in the technology sector and financial services. The rest of the projects served organizations in agribusiness, education, energy, the environment, non-profits, and manufacturing. Many FYPs were with repeat clients, and clients with ties to Tuck or Dartmouth.

Across the spectrum, “the real differentiator for Tuck students is their ability to choose what project they work on,” says Becky Rice, the director of the FYP course. “They can find a client, work on their own entrepreneurship project, or select a project sourced by Tuck. They decide what they end up doing, and the classmates they do it with. The options students have with the FYP are really significant.”

Is there a market for The Post’s new advertising platform?

The Washington Post is one of the most venerable and well-respected newspapers operating today, with a regular monthly audience of more than 90 million viewers on its website. To leverage that audience and provide valuable advertising space at scale, The Post is building Zeus Prime, an automated platform that connects brands and advertisers with advertising space in a national network of publishers. To analyze whether such a product has a viable market, The Washington Post turned to a group of Tuck students completing their First-Year Project.

The connection between Tuck and The Washington Post came through the team’s leader, Annesha Bhattacharya T’22, who self-sourced the FYP by reaching out to Joy Robins, The Post’s chief revenue officer. Prior to Tuck, Bhattacharya had worked on the business side of a few newsrooms, which stoked her passion for journalism and its unique commercial challenges. As she discussed the Zeus Prime project with Robins, Bhattacharya realized it would be the perfect bridge between her industry experience in journalism and her goal of doing strategy work after Tuck. “The Washington Post is a place I’d always hoped to work with,” she says.

As the organizer of the FYP, Bhattacharya had the opportunity to staff the team. She gathered classmates who, like her, had the relevant technical background but were new to the advertising technology space: Jacqueline Sullivan, Mike McQuillan, Nick DeSimone and Gautam Jagannathan. Their task was to do a competitive landscape analysis for the advertising technology space and the Zeus Prime platform, including a go-to-market strategy. They divided the work into two streams: primary research, where they interviewed people in advertising and media; and secondary research, where they gathered background information and built a map of the advertising technology market. “We always got together every week to brief each other on what we learned,” Bhattacharya says. “It really helps to have a team who trusts each other and works well together.”

The team’s synergy came through in the quality of their work product. The Post wanted to know the hard truth: would Zeus Prime be a profit center for the business? “We were in the middle of building this product, and if they found in their analysis that the market was super saturated or we had the wrong product mix or we priced it incorrectly, we would have listened to them,” says Amanda Hicks, the director of product management at The Post. “The reason we would have listened to them is that by the end of the project, we knew they really knew their stuff about competitors we hadn’t even heard of, and parts of the market that might be coming alive in the next few years.”

At the end of the project, the FYP team delivered a 1.5-hour virtual presentation to the core Post team and Robins, the CRO. During the presentation, the audience was commenting to Hicks on Slack on how well the students did. “They came up with a presentation that we’re going to be able to hand off to our internal sales team and then to our potential advertising clients,” Hicks says. “It was really impressive.”

How can Under Armour drive brand affinity with women through team sports?

Lulu Carter T’22, D’17 came to Tuck with the intent to work in the athletic space. She considered self-sourcing her FYP to align with that goal, but then in December a project with Under Armour appeared on the FYP board. The project brief was to examine the women’s market in the U.S. and globally and think about how to continually deepen Under Armour’s presence and engagement with female consumers in the team sports space. “It was exactly the kind of project I was looking for,” Carter says.

Carter worked with Monique Mahboobani T’22 to come up with the right team for the FYP. They recruited classmates Lindsay Cox, Nikhil Shah, and Matt Dwyer, who collectively had experience with Walmart’s team sports area, the Boston Red Sox, finance, and playing athletics. In short, they were all passionate about the challenge Under Armour presented them. “That was a big part about why we were able to work together so well,” Carter says.

They divided the project into two phases: understanding the market and identifying trends, and validating the insights and trends with four key recommendations and a vision of how those strategies could come to life. Together, they interviewed close to 25 female athletes to understand their purchasing behavior and how they think about athletic retail. “The Tuck team’s analysis and command of facts, their intuitive understanding of the consumer, and their ability to develop actionable, strategic recommendations were fantastic,” says Georgina Wright, senior strategy lead at the company.

The team felt well prepared for this work by the Tuck curriculum, leaning on knowledge from the core marketing courses, and the elective courses Digital Change Strategy, Customer Analytics, and Retail Pricing Analytics. They built on the knowledge from those courses through the real-world experience the project offered. “Our whole team was able to come away with skills and knowledge we will use in the future,” Carter says.

Their work has proven valuable for Under Armour, a company whose strategy rests in part on pillars of team sports and engaging with female consumers. “It was great how much emphasis the team put on social justice and cultural trends in addition to market share and competitive landscape,” says Wright. “At Under Armour, we’re talking a lot more about our brand purpose, so it was highly relevant.”

At the conclusion of the project, the Tuck team presented a 90-slide PowerPoint deck to senior-level stakeholders, including C-suite executives. Wright noted that their presentation style was professional and their content was excellent, and she was pleased with the high level of engagement they garnered from the executive audience. “It’s easy for audiences to politely say, ‘You were great, well done’ and move on. I’ve seen that time and again,” Wright says. “This time, the chief product officer, the chief strategy officer and several vice presidents were actively asking questions, which showed they really valued the team’s recommendations.”

Can an outdoor gear-share operation be affordable and sustainable?

Allison Kelly T’22 is passionate about the outdoors and is hoping to work in the outdoor industry after Tuck. When she saw the FYP with Maine Outdoor Brands (MOB), a non-profit dedicated to growing the outdoor brands based in Maine and the state’s outdoor economy, she knew it was the one for her.

One way MOB can accomplish its mission is to get more people into outdoor sports. But activities such as camping, backpacking, and rafting require a lot of expensive equipment just to get out there, which can be cost-prohibitive for many people. “You only have one opportunity to introduce someone to the outdoors in the best way possible,” Kelly says. “If they are going out in the rain in a cotton hoodie, they’re not going to enjoy it as much as they would if they were fully outfitted.”

To ease that initial barrier of gear cost and knowledge, MOB wanted to explore the feasibility of owning and operating a gear share system. The gear share would be stocked with items such as tents, sleeping bags and pads, cookware, and other gear you need to have a successful outing, and it would rent these items at an affordable cost to trip-leading organizations in Maine. MOB called on Tuck students to help understand if a gear share could be financially and operationally viable.

“One of the reasons we love working with Tuck is that we are a non-profit and still in the startup phase of our organization,” says MOB executive director Jenny Kordick. “We have a lot of big ideas that require a sophisticated level of coordination and collaboration but also time to think and vet. That’s where the Tuck team came in.”

Kelly and her team members Gregory Rivers, Kimberly Russell, Steven Kiesel, and Susie Peerson divided the project’s workload according to their backgrounds, with some focusing on financial issues and others doing industry research and interviews. Ultimately, they built a flexible financial model that would allow MOB to adjust key parameters and determine startup costs, expenses, quantity of equipment and revenue.

“I relied on my Corporate Finance and Analytics courses quite a bit in this project because they gave me a lot of Excel experience,” Kelly says. “And Operations played into our work too, because we had to think about warehousing, processes, and transportation.”

Equipped with the Tuck team’s financial model, MOB is ready to begin piloting the gear share and determining what kind of funding it will need. “We are definitely optimistic and moving forward,” Kordick says. “With the pandemic, outdoor participation has really surged, so this is a great time to capitalize on that trend. We really appreciated the team’s willingness to dive into it and help us think through different models and bring an innovative approach to the idea.” 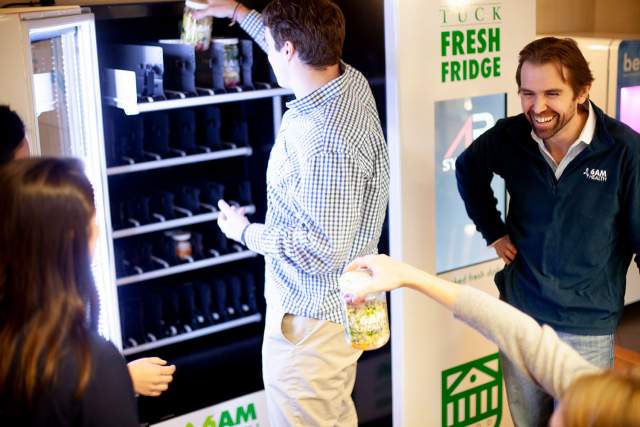 A team of Tuck students is working with 6AM Health, a specialty food business founded by Brad Callow T’13, to help bring the company to scale. 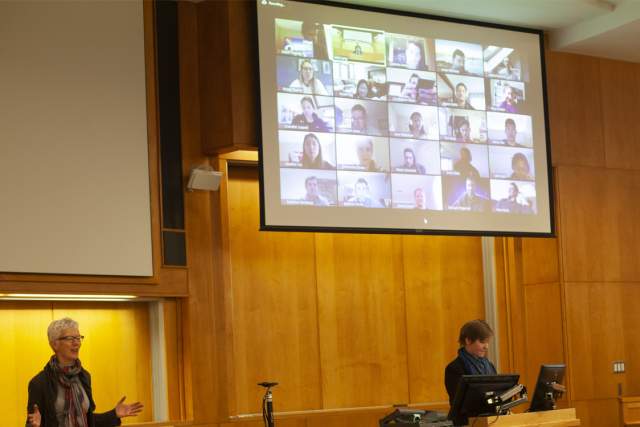 This spring, 56 teams of first-year students engaged with companies and nonprofits around the world to address real-world business opportunities.