How to breathe new life into one of the country’s oldest companies? King Arthur Flour Company president Steve Voigt T'86 did it by embracing people’s love of something timeless: baking. 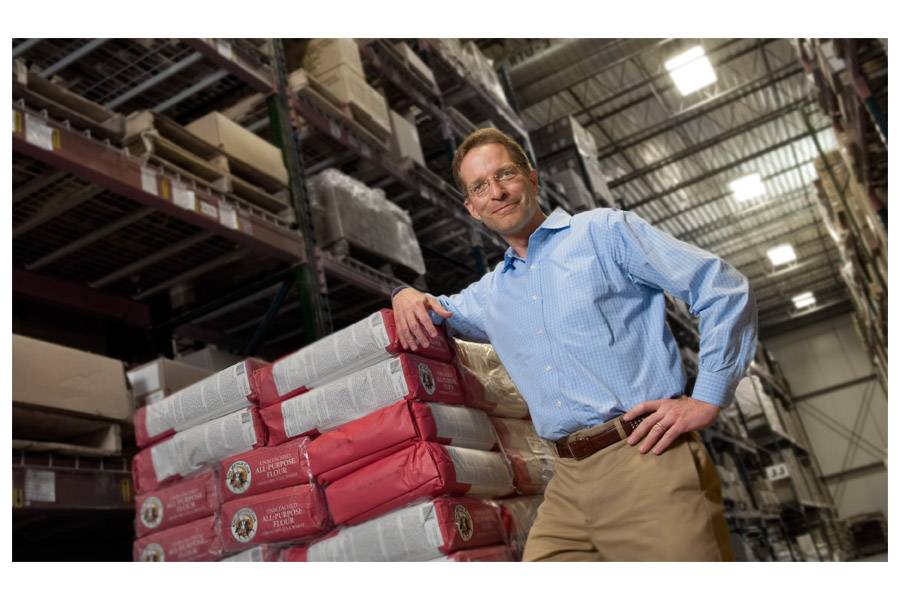 “The world would be a better place if people baked for each other more often,” says Steve Voigt T’86, president and CEO of King Arthur Flour Company in Norwich, Vt. “It’s just a wonderful activity.”

Whether baked goods are the definitive answer to global strife or not, one thing’s for sure: It has certainly done wonders to bolster the following of King Arthur lately. And some of the company’s most ardent fans are its employees—all of whom are regularly encouraged to learn about and practice baking as much as possible through classes, community outreach, and free baking supplies.

For Voigt, it’s as much a business strategy as a way of life. “We’ve never considered ourselves just an SIC code,” says Voigt. “It’s as important to us to teach and promote the baking culture as it is to sell the most wonderful products.”

It wasn’t always thus. When Voigt came to the venerable institution in 1992 as the vice president of finance, he had his work cut out for him. Founded in Boston in 1790, King Arthur had been owned and operated by the same family for five generations, and it enjoyed a trusted, if staid, reputation. “Here I was at a company that wanted to get where it needed to be, but in a socially responsible way,” he says. Then, a few years after Voigt joined on, the company embarked on a plan to sell shares to an employee stock ownership plan. In the meantime, in 1999, Voigt took over as president and CEO. Today, he leads a company that is owned entirely by its 240 employees.

Since Voigt, whose background is in finance, took up the mantle, the changes have come fast and furious. Not the least of them is a brand new, state-of-the-art Baking Education Center, expanding room for classes and demonstrations for employees and community members. Courses with names like The Fundamentals of Bread Baking, Setting Up A Successful Bakery, and That Takes The Cake: Divine Decoration regularly sell out and have waiting lists.

As far as how he keeps up, Voigt credits his time at Tuck with providing him with the raw know-how.

They also offer classes online, and employees travel all over the country to teach in-person sessions and spread the gospel of good baking. Voigt has a team on the road constantly, talking to high schoolers about how to make pizza, explaining to crowds how yeast makes bread rise, and presenting at conferences about the benefits of baking with whole grains.

But that education and enthusiasm about baking always starts from inside the company before it moves outward, insists Voigt. “The more we empower our employees to love what they make, the easier it will be for them to share that with the larger community.” To that end, in addition to discounts on baking supplies at the company store, all employees get a free bag of flour every month—and a number of them act as instructors themselves. The results are nothing short of inspiring. “People are so interested in baking. They come to visit us here, to a class or to our store, to see our bakers bake here, and they’re so happy, it’s like they’ve arrived at mecca.”

Sitting at the center of such a passionate community can make for a lot of moving parts—a fact Voigt is quick to recognize. “There are still new things happening all the time here,” he says. “We’re making so many changes and creating new programs out of many diverse ideas.”

As far as how he keeps up, Voigt credits his time at Tuck with providing him with the raw know-how. “There are so many things to keep on top of in a midsize company; you have to wear a lot of hats,” he says. “My professors at Tuck taught me to be nimble and how to be very good on your feet in a triage situation. You figure out how to get a lot going in a very small amount of time, and you have to learn to put certain things on ice but always be fired up about everything.”

Getting—and staying—fired up doesn’t seem to be much of a problem for Voigt and his crew, who, on top of their education programs, keep the community engaged with a popular blog called “Baking Banter,” a series of cookbooks, and a recipe-filled, colorful bimonthly newsletter, “The Baking Sheet.”

But for all of King Arthur Flour’s recent innovations, Voigt insists that it’s also fundamentally the company’s history that keeps folks coming back. “So much of what attracts people to the company,” he says, are “long-standing traditions.” And the fact that everyone is as involved in the mission as they are, he says, helps empower them to keep driving the company forward. “All of our employee owners,” he adds, “know they have the help they need to overcome roadblocks.”