Before he became the longest-serving New Hampshire governor since 1816, John Lynch was chief executive officer of Knoll, Inc., and helped return the money-losing Pennsylvania-based office furniture maker to profitability. 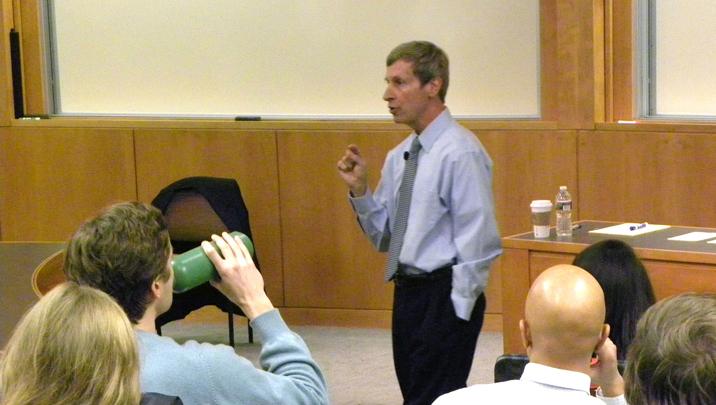 There are many obvious differences between running a government and a business. Yet success in both jobs was contingent on a number of the same factors, Lynch told a gathering of Tuck School of Business students April 17 in a Global Insights Distinguished Speaker Series talk sponsored by the Center for Global Business and Government.

“Who’s the customer and how do you meet the needs of that customer in the most efficient way possible?” asked Lynch, who stepped down as governor this year after serving four two-year terms.

Doing so means building trust among various constituencies, creating a cohesive team, and getting good data to make decisions, said Lynch, who also previously worked as director of admissions at Harvard Business School and for his own consulting firm, The Lynch Group.

When Lynch became CEO of Knoll in 1994, the firm was losing a million dollars a week in the U.S. and suffering similar losses in Europe. Parts of the furniture maker had been sold numerous times leading to staff shakeouts and, as a business school graduate, Lynch says he was greeted with suspicion by employees.

“I knew zero about office furniture,” said Lynch. “I had to go in and earn the trust of the people. Earning trust was probably the hardest but most important thing that I did. Once they started to trust me, things started turning around.”

The next year, the firm earned record profits of $55.2 million. Gaining trust was key to that success. Similarly, winning the trust of voters was key to Lynch’s first election win in 2004, when he raised questions about the ethics of his incumbent opponent. After a narrow win, he helped win the trust of voters by instituting ethical reforms in state government, leading to landslide wins in 2006 and 2008.

Building a team is also a pillar of management, said Lynch. However in government, this is complicated by electoral politics. In New Hampshire, governors retain department heads from their predecessors, which means a new governor’s top deputies are sometimes politically at odds with the boss. “Some of them didn’t like each other, they were political appointees and in some cases wanted to run for higher office themselves,” said Lynch. “It took five to six years to get some of them out and build a team,” said Lynch.

Getting good data is also important. Lynch recalled visiting a large television station in Philadelphia while in the private sector. The station was making money because broadcast regulations limited competition, yet its management didn’t have access to key data such as how many people worked at the station, making performance improvement difficult.

In state government, obtaining good data on issues like education spending and performance is also a challenge. “It’s not only about good budgets, it’s about making good decisions,” said Lynch. “How do we know if the data is accurate? If we don’t have good data, we’re not going to make good decisions.”

There are indeed large differences between leading a company and a state government, said Lynch. Governors can’t choose their customers, as does a CEO. A governor’s power is dramatically limited by the legislature and courts, and his or her ability to push initiatives requires at least some measure of support from the opposing political party. “Imagine if in the organizations you work for this summer, half the people were trying to get the other half fired from their jobs,” Lynch told the students. “It ultimately leads to very little trust and lots of suspicion.”