Give Me Your Skilled, Your Educated

President Obama thrust immigration back into the spotlight earlier this year with his executive order halting deportations for certain young illegal immigrants. In the context of America’s jobs crisis, however, this is the wrong immigration issue to focus on. 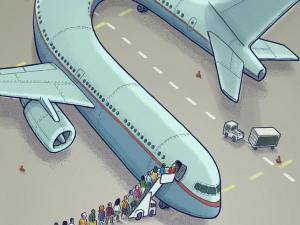 Our most pressing immigration problem will march across platforms at American colleges and universities this spring—skilled foreign-born graduates whom we do not adequately incentivize to stay and work here.

At Tuck Investiture last year, I proudly read the names of 277 MBA graduates. The Tuck class of 2012 was 35 percent foreign-born, representing countries from Australia to Zimbabwe. Many of these graduates chose Tuck over peer schools abroad because they aimed to apply their world-class U.S. education in the U.S. labor market. The same is true across academic fields. Today nearly 42 percent of all U.S. doctorate-level science and engineering workers are foreign-born.

Won’t more immigrant graduates staying in America mean fewer jobs for Americans? No. On the contrary, they will create jobs for Americans—in large corporations and new companies alike. Large companies that hire skilled immigrants tend to hire more U.S. nationals as well. Bill Gates has testified that for every immigrant hire at Microsoft, an average of four non-immigrant employees are hired.

As for start-ups, a 2007 study by researchers at Duke and UC Berkeley found that 25 percent of all U.S. high-technology firms established between 1995 and 2005 had at least one foreign-born founder. In 2005, these new companies employed 450,000 workers and generated over $50 billion in sales.

Skilled immigrants have long supported U.S. jobs and living standards. They bring human capital, financial capital, and connections to opportunities abroad. Despite all this dynamism, U.S. policy toward skilled immigrants has long been far too restrictive. The H1-B program, which accounts for nearly all of America’s legal skilled immigration, imposes a cap of 85,000 visas annually—65,000 with at least a bachelor’s degree and 20,000 with at least a master’s degree. For years, demand far exceeded the supply. In 2007, the year before the financial crisis struck, more than 150,000 H1-B applications were submitted on the first day.

Since the financial crisis, America’s immigration policy has further tightened. Buried in the American Recovery and Reinvestment Act of 2009 was the Employ American Workers Act, which restricted H1-B hiring at any U.S. company that received government support from either TARP or new Federal Reserve credit facilities. This act foolishly hurt hundreds of finance companies by limiting their talent pool precisely when they needed new talent the most.

I saw the damage done by this misguided legislation firsthand. Within days of the president signing it into law, a number of U.S. banks reneged on job offers extended months earlier to foreign-born MBA students. Six Tuckies were soon in my office, confused and upset at suddenly facing unemployment. By graduation only one had secured employment in America, after randomly winning a visa lottery. The other five all secured jobs—but all abroad. All five said they would probably never return to the U.S. because of the Employ American Workers Act. The long-term result? Lost ideas. Lost jobs. Lost taxes.

These five graduates exemplify the worrisome reality that America’s attractiveness is waning for talented immigrants from dynamic countries. In the past decade, the share of doctoral-degree recipients in science and engineering from China and India who report definite plans to stay in America has been falling. A recent survey by Duke University researcher Vivek Wadwha found that 72 percent of Indian immigrants who returned to their home country said that opportunities to start their own businesses were “better” or “much better” there than in the U.S. For Chinese immigrant returnees, the figure was an alarming 81 percent.

We need to reverse this trend if we hope to overcome our jobs crisis, the depth of which is sobering. The 111 million private-sector jobs in America today are the same number there were 12 years ago. Leaders in Washington can keep fiddling with haphazard fiscal incentives or temporary proposals whose political rationale trumps economic ones. Or they can instead rebuild the foundation of new-business formation, innovation, and investment that ultimately creates jobs. Opening U.S. doors much wider to skilled immigrants educated here should be a cornerstone of any pro-growth policy. It is a graduation gift that the Class of 2012 and all of America deserve.