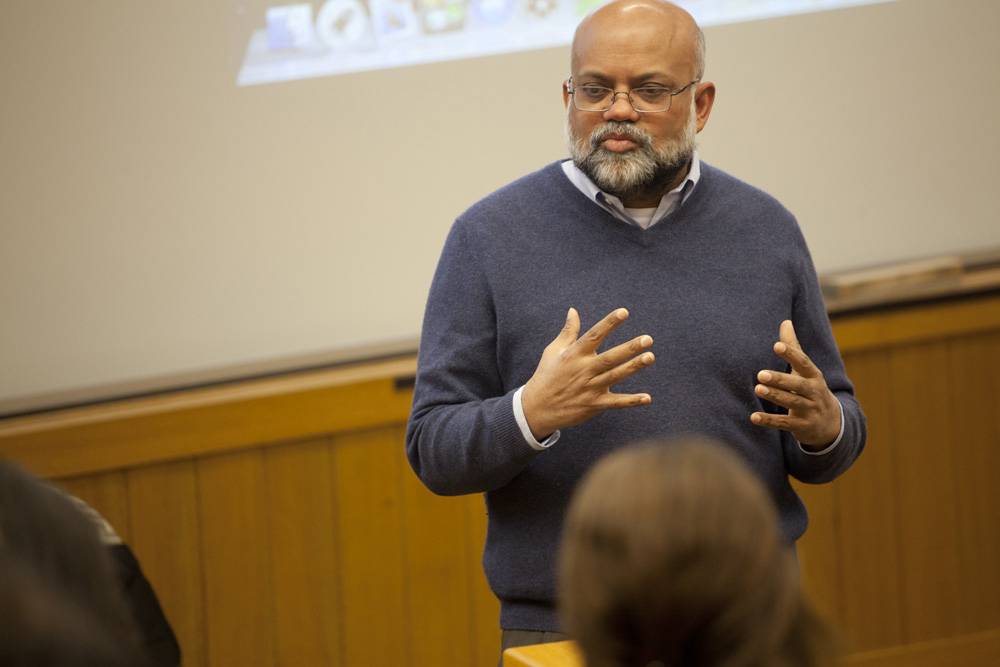 As a child in Bangladesh, Iqbal Quadir once walked half a day to the neighboring village, only to find that the pharmacist whose help he needed was already gone. Twenty years later as an investment banker on Wall Street, he found himself similarly frustrated when a computer network outage sidelined his entire office. Communication could have prevented either day from being wasted, he realized, and so he coined the phrase, “Connectivity is productivity.”

Quadir, the founder and director of the Legatum Center for Development and Entrepreneurship at MIT, traced how this guiding principle shaped his entrepreneurial journey in his Feb. 10 Tuck talk, “Millions of Teachers: Entrepreneurs Learning from Customers in Low-Income Countries,” part of the Center for Global Business and Government’s Killingstad Global Insights Series.

Co-sponsored by the Center for Business & Society and the Center for Private Equity and Entrepreneurship, Quadir’s presentation began with his aforementioned epiphany in 1993. At that time in Bangladesh, there was only one phone for every 500 people and virtually no phones at all for the more than 100 million people living in rural areas. Quadir hoped that by providing poorer Bengali people with access to cell phones, he could empower them to economically empower themselves. “Telecommunication is a weapon against poverty,” he said.

Today, the company Quadir helped build, GrameenPhone, is the largest and most profitable business in Bangladesh with more than 50 million subscribers. According to Quadir, his success was the result of lessons learned from the “millions of teachers” that made up his intended customer base: poor Bengalis. “We often think that we can cook up solutions for poor people but neglect to think we might be able to learn from them,” he said. “After all, they’re customers and we understand their needs more clearly if we listen.”

In fact, Quadir said he found it necessary to “unlearn” certain bits of conventional wisdom he had acquired at Swarthmore College, the Wharton School, the World Bank, and on Wall Street. One of these notions, cited by would-be backers as a reason why his idea would fail, was that communication was not a necessity for the poor in the manner of medicine or food.

Traveling on planes to and from Bangladesh, however, Quadir came into regular contact with migrant laborers who journeyed great distances so that they could send money home. “I could hear them discussing how worried they were about the children, parents, and families they left behind, but there were no phones in the villages. It was then that I saw firsthand just how necessary communication was,” he said.

Another obstacle Quadir faced was the prevailing notion that the poor would not be willing to spend their hard-earned money on cell phones. This time, his teacher was a Bengali maid, who asked him to mail an important letter for her without postage. A stamped letter may be lost, she explained, but one without postage is guaranteed hand delivery since the mail carrier wants to collect a small penalty fee from the recipient. “When poor people need a service, they will pay for it,” he said. “Not having the service is actually more costly, and they should be able to choose what’s right for them.”

Perhaps his greatest obstacle was the idea that, on paper, his plan was doomed because of the low GDP of Bangladesh and the economic travails of each village. But after talking to villagers who had parlayed microcredit from their local banks into successful vegetable or dairy businesses, he realized that existing income is not so relevant since a productivity tool can allow someone to bootstrap.

By substituting a cell phone for seeds or a cow in the microcredit model, Quadir was able to convince backers of its feasibility. His company “Gonofone”—“phones for the masses” in Bengali—joined with Telenor, Norway’s leading telecommunication operator, and Bangladesh’s Grameen Bank to eventually become GrameenPhone, Ltd. The subsequent success of his company and the way it transformed Bangladesh proved that Quadir was right.

When Quadir first had his idea in the early 1990s, Bangladesh had 300,000 phones. Today, it has more than 100 million. “Even in the most troubled places—Congo, Afghanistan, Ethiopia—phones are everywhere,” he said. “The key is that they make people feel safer and more productive. Connectivity is productivity; productivity can lead to purchasing power.”