Google described as a business, a research center and a social movement. 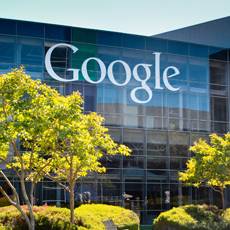 Most companies think of progress in terms of making one of their existing products better. Getting a 10 to 15 percent improvement is difficult and often constitutes success. Not so at Google Inc., says Patrick Pichette, the company’s chief financial officer.

“At Google, we have a fundamental belief that that’s not the way to tackle opportunities,” Pichette told a group of more than 250 Tuck MBA students May 23. Instead, he says he wakes each morning thinking not of the company’s balance sheet or its hedging strategy but of opportunities that are a tenfold improvement on the status quo.

“We think big,” said Pichette, whose talk, “Tipping the Scale: Google and The Future of Big Data,” was the term’s final installment of the Center for Digital Strategies’ Britt Technology Impact Series. “One of the first questions we ask ourselves at Google is, Will a minimum of a billion people use this?”

Pichette sees the expanded use of Big Data as a trend with enormous potential for good. He linked the compilation of trillions of pieces of information about people in massive databases to the Enlightenment of the 17th and 18th centuries, when science and reason became the basis for understanding the natural world.

“Already, the Enlightenment has delivered amazing riches to humanity,” he said. “It’s built on the fundamental capability of humankind to understand the world around them. It’s not built on dogma, but trusting facts. If trusting facts is the premise, there’s no better world than the world of Big Data.”

Google, which dominates Internet search and has expanded into technologies ranging from self-driving cars to wind energy farms, has only begun to unlock Big Data’s potential. The company is at once a business, a research center, and a social movement, he added.

Pichette, who wore a T-shirt, jeans, and running shoes for his talk, took an unconventional path to the top of one of world’s most-admired companies. Raised in the blue collar community of Montreal-Nord, he spent his high school years studying sciences before switching his focus to fine arts in college, studying El Greco, Botticelli, and classical architecture. After a stint in a Canadian youth volunteer program, he worked as a logger, a heavy equipment operator, and tree planter. Pichette later went back to university and won a Rhodes Scholarship to Oxford. From there, he became a telecommunications executive and partner at McKinsey & Co. before joining Google in 2008.

He offered students two pieces of advice. First, personal insecurities must be overcome to accomplish big things. “The biggest secret that I’ve found in the world as I’ve worked over time is that everyone is insecure,” he said. “Now that you know that everybody’s insecure, just relax. Now you have the license to jump in and go for it.”

Second, don’t let go of good mentors. “I’m 50 years old, I still have mentors,” Pichette said. “Mentors matter immensely. A mentor is someone that has a genuine passion for you and for your success but is completely dispassionate about telling you what you’re doing right or wrong.”

Pichette answered questions from students for 30 minutes, responding to queries ranging from the company’s competition with Apple Inc. to its Google Fiber initiative to wire cities across the U.S. with high-speed broadband networks.

He expressed admiration for Apple and acknowledged the two companies’ relationship, in which Google writes applications for Apple devices even as the two offer competing platforms in areas such as smartphones and tablets. “I don’t think there’s room for jealousy in the digital economy given all the opportunity around us,” he said.

Pichette told students that much greater things are yet to come from Silicon Valley. Innovation, he said, is still in the “first inning.” The potential of Big Data, which Google has used to map flu outbreaks, forecast stock prices, and target online advertising, has hardly been tapped.

“With all this Big Data around us, there are so many better answers,” he said. “Remember, Google is only 15 years old and look at how much we’ve accomplished at Google in that span. You know what I wish for the world, another 10, another 20, another 50 Googles. Imagine what the world would look like with another 50 Googles out there. That would be an awesome place to be.”