Health Care in America: Where to Now? 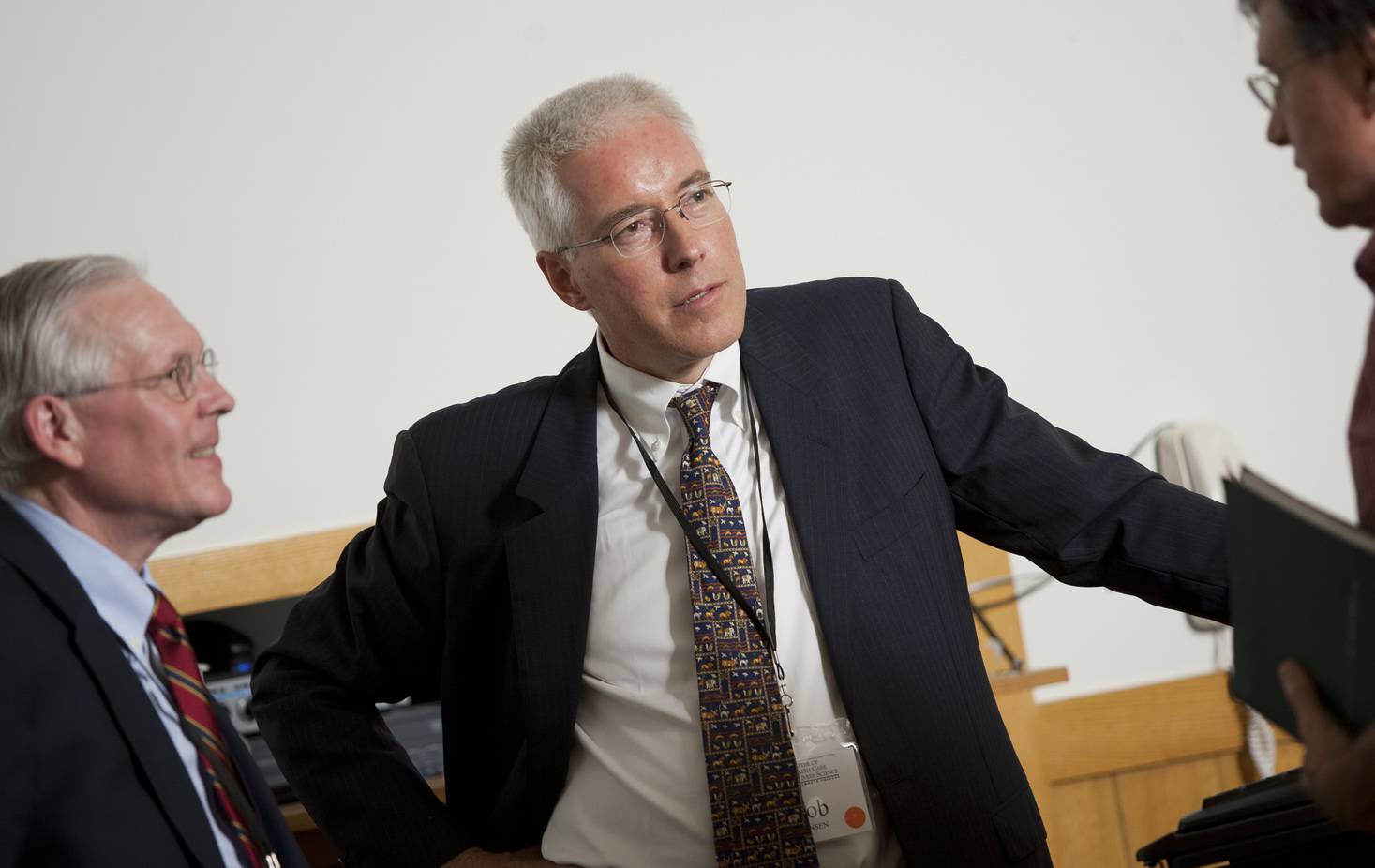 In the wake of the landmark Supreme Court decision on the Affordable Care Act, professor Robert G. Hansen explains how the law does and doesn’t fix our dysfunctional health care system—and worries about some big unknowns.

At the end of June, all eyes were on the United States Supreme Court, waiting patiently for its decision in National Federation of Independent Business v. Sebelius. Ruling on the constitutionality of the Patient Protection and Affordable Care Act—aka “Obamacare”—it was the most anticipated case since Bush v. Gore, in 2001, and probably the most important analysis of federalism since the New Deal. And for good reason: health care spending now accounts for nearly a fifth of the gross domestic product in the United States, and the new health care law, if upheld, would be a huge disruption to this gargantuan and complex part of the economy.

Robert Hansen, the Norman W. Martin Professor of Business Administration at Tuck,  was watching the case closer than most. Hansen teaches the Health Care Economics course in Dartmouth’s Master of Health Care Delivery Science program, in which faculty from the Tuck School of Business and the Dartmouth Institute for Health Policy and Clinical Practice partner to offer expertise in health care outcomes, leadership training, teamwork, finance, and operations.  The first degree of its kind, its participants are doctors, nurses, health insurance executives and hospital administrators studying how they can help make health care better and more affordable at the same time.

An economist with a penchant for the messy, inscrutable balance sheets of the modern world, Hansen gets a kick out of health care. “I like these kinds of topics,” he says. “The environment, the credit crisis, health care: they’re a combination of economics, public policy, business issues and sometimes natural science. Those kinds of integrative areas are always interesting.”

Just before the Court issued its decision, Hansen predicted on his blog that the justices would uphold the law by a vote of six to three. Overall, he was right about the destination: as we all know now, the law, complete with the controversial individual mandate, stands. But the route was unexpected. Chief Justice John Roberts joined the majority, while Justice Anthony Kennedy sided with the traditionally conservative bloc of the Court, making for a shocking five to four vote. And Roberts threw another curveball, upholding the individual mandate not under the Commerce Clause but under the Taxing and Spending Clause. To add even more intrigue, the Court overturned the part of the law dealing with the expansion of Medicaid. “Nobody saw that coming,” Hansen says.

Now that the Affordable Care Act has been upheld, we asked Hansen to talk about where health care in America goes from here.

Chief Justice Roberts ruled that the penalty for not complying with the individual mandate is a tax, and therefore not an exercise of the federal government’s power under the Commerce Clause. Does naming the penalty a tax have any implications on how the law is implemented?

I don’t think it has any real implications for the law itself. But it does have some implications for laws in other areas. It’s pretty clear that the distinction between telling someone you can’t do something and telling them you must do something is a bright line. Now cases where there’s a penalty for not doing something, those could be treated as a tax. But a tax discussion in Congress is not easy. There are a lot of emotions around that word. So it might be a little harder to get some of those laws passed.

The Court ruled that it’s unconstitutional for the federal government to coerce states into participating in the Medicaid expansion by threatening them with the loss of existing federal payments. What effect will this have on Medicaid, hospitals and state budgets?

If some states turn down that Medicaid expansion, that affects the rest of the law. The law includes cuts to hospitals (so-called “disproportionate share payments”) on the assumption that hospitals would see fewer uninsured patients.  Without the expansion of Medicaid, that assumption will be wrong, and hospitals in states that refuse the Medicaid expansion will continue to see uninsured patients, many of whom cannot or will not pay their bills. It’s going to be hard for states to turn the Medicaid expansion down, but I could make the case for it. There’s always uncertainty around how much the federal government will pay towards Medicaid. If I were a governor or legislator, I could see not committing my taxpayers to that kind of a liability.

The law as a whole: should we have it or not?

Let’s have it. There are a lot of things I don’t like about the law, but in the end it does a few things that are really important. To a great extent, it solves the fairness/equity issue that we have with health care in this country. There’s been this tremendous inequity where people don’t have insurance or can’t get reasonably priced insurance. For a society as rich as ours to not have that safety net, that’s a problem. Through a variety of means, in particular the subsidies and the Medicaid expansion and the insurance industry reforms, it will cause more people to have coverage and less people will go through bankruptcy because of their medical bills.  So if the choice is this bill or back to the old regime, I would stay with the ACA and try to fix some of its problem areas.

Some critics decry the new taxes peppered throughout the law. What do you think?

There’s a whole bunch of new taxes in here. One of the biggest is an increase in the Medicare tax for people making more than $200,000 per year, and an extension of the Medicare tax to people claiming investment income. There’s a tax on the pharmaceutical industry, the medical device industry and the insurance industry; a tax on very high value health plans (“Cadillac” plans). And this is a hodgepodge of taxes. Our tax system in this country is already a mess, and this is not helping it.

Does the law do anything to change the popularity of employer-sponsored health insurance?

I think it reinforces employer-sponsored insurance. Most Americans below the Medicare age get their insurance through their employer, and we do that mostly because it’s tax deductible if the employer buys it but not if the individual buys it. The new law doesn’t remove the tax benefit, and it puts a penalty on employers that don’t provide insurance.  The subsidies to buy insurance on the new exchanges will encourage some employers to opt not to offer insurance to their employees, but I doubt this will cause a large scale reduction in employer sponsored insurance.

By mandating the creation of health insurance exchanges, how much oversight is the federal government going to have over how policies are written?

Too much control, if you ask me. For example, it puts restrictions on how much policies can differ based on age and smoking status. The law also defines what an affordable insurance policy is, which essentially puts limits on the extent of high deductible or catastrophic plans. In my opinion, insurance is meant to prevent large, unexpected financial events. But it has evolved into something that pays for everything, including routine care. And when that’s the case, people have an incentive to get as much care as they want, not necessarily as much as they need. That’s a moral hazard. By putting restrictions on how aggressively premiums can be tailored and what kind of policies can be offered, they’re really constraining what we can do to eliminate moral hazards.

What are some of the business issues this law brings up?

One question is to what extent employers will stick with employer-sponsored insurance. It’s a big question for companies: should they be in the business of insuring their employees’ health or should they treat that as a non-core competency and get their employees to buy it outside? There’s also a big question about how this affects the number of people a company will want to employ, and what kind of people. It’s unclear if the law will have a negative impact on hiring.

What business opportunities does the law possibly create?

There’s going to be a lot of winners and a lot of losers. Net, I’m hoping it will be good. But the distribution of impact is going to be huge. So people should be looking at how this creates opportunities. I think the exchanges represent a great opportunity to design insurance policies attractive to certain segments of the population. That’s the area I would be focused on: designing plans, especially in the networks of suppliers associated with health plans, and offering them through these new state exchanges.

How have your students in the Master of Health Care Delivery Science program reacted to this decision and the impending implementation of the Affordable Care Act?

If anything, they have almost universally taken this as a call to arms. They know it’s up to them to solve the cost problem. They know the onus is put more on the MHCDS program and its students to start redesigning the way we deliver and pay for care, because the problem has gotten worse. The fundamental drivers of cost and quality are still waiting to be addressed. This makes the jobs of MHCDS students even more important.