It’s one of the many paradoxes of Nepal. Less than 40 percent of the country’s 27 million people have access to electricity, yet the nation possesses the resources to generate an estimated 40 times current electrical demand there. For Antonio Del Valle T’11, it was this dichotomy that drew him to the impoverished south Asian nation on a Tuck GIVES-sponsored summer internship.

It’s one of the many paradoxes of Nepal. Less than 40 percent of the country’s 27 million people have access to electricity, yet the nation possesses the resources to generate an estimated 40 times current electrical demand there. For Antonio Del Valle T’11, it was this dichotomy that drew him to the impoverished south Asian nation on a Tuck GIVES-sponsored summer internship. 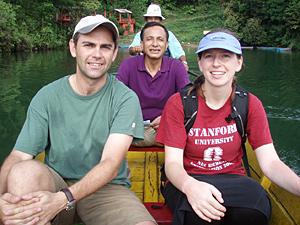 Paired with two fellow interns from Stanford University, the second-year student from Spain worked under the tutelage of American attorney and Columbia University and Stanford Professor Jenik Radon—an internationally recognized adviser on privatization and energy, co-author of Nepal’s new interim constitution, and father of T’05 Kaara Radon. The task: to create a strategic business plan for Nepal to develop its vast hydroelectric potential, taking human and social concerns and costs into account.

Against a backdrop of ongoing political instability and civil unrest, Del Valle says, that was no easy task. Formerly a monarchy, Nepal became a republic just three years ago and has yet to succeed in ratifying a permanent constitution. In addition, a pervasive lack of education, technological know-how, and infrastructure pose substantial challenges for those who would invest there. Even so, Del Valle says, now is the time for the fledgling republic to take control of its valuable resources before others can exploit them.

Traversing capital city Kathmandu’s vibrant, chaotic streets by taxi and riding a rented bicycle further afield, Del Valle spent the first two weeks “just meeting people,” he says. They included government representatives, lawmakers, members of the Nepal Electricity Authority, representatives from various NGOs, potential financiers and developers, representatives of the Asian Development Bank and World Bank, and representatives of the U.S. embassy.
Based on these many conversations, the plan evolved. Del Valle describes it as a set of recommendations centered on four key tenets. “At the end of the day,” he says, “It’s just common sense.

“First, they have to have a national plan to develop their hydro energy. Second, we recommend that the government set up an agency to deal with these projects because right now it’s a mess—with five or six organizations in the government that have some kind of decision-making power in these projects.”

Third, Del Valle says, Nepal should strengthen its already strong connection with neighboring India, a virtually limitless market for Nepal’s excess clean power. “That’s key—they can’t be unconnected from India. Hydro energy has huge potential, but it is not reliable. So some months they will be able to produce a lot of energy and sell it, and maybe some months they’ll need to import some from India.”

And finally, he says, hydropower contracts should be developed as public-private partnerships as many other countries have done with great success.

It fell to Jenik Radon to present the final plan to the Nepalese government. Where it goes from here remains to be seen. But no matter the result, the project has already proven invaluable to Del Valle personally as well as professionally.

“I confirmed the sector I want to work in after Tuck is energy infrastructure,” he says. “And after working in Nepal, I would now consider working in developing countries as well as developed countries.”

As for the part Tuck played in the experience, Del Valle says, “Tuck helps a lot. Both because of the network Tuck offers and the skills you learn here. You really feel that you can add value to many people just with the skills you have learned and everything you know.”