In saluting Emeritus Professor Richard S. Bower at a board of overseers dinner in 2004, Frank Herringer D'64, T'65 acknowledged his former professor as "a noted scholar, widely published." But equally important, Herringer said, was that "first and foremost, he was a great teacher— probably the best I've ever had." Coming from the current chairman of Transamerica Corp., the compliment was significant. 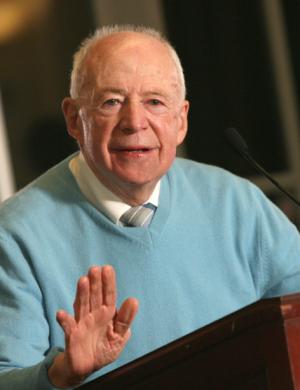 Herringer offered his tribute after the announcement of a new fund that will bear Bower's name. The Professor Richard S. Bower Finance, Economics, and Accounting Seminar Fund gives Tuck faculty members the opportunity to meet regularly in interactive sessions to share their current research, debate topics, and challenge each other's assumptions.

The announcement came as a surprise to Dick Bower. The 28-year veteran of the Tuck faculty is considered the founding father of the school's popular Managerial Economics course and was a favorite instructor on campus.

Dean Paul Danos welcomed Bower and his wife, Dot, to the dinner and then gave the floor over to colleagues and former students, who offered praise for Bower's dedication to his profession and for Tuck's creation of this new fund in his name.

Dean Bob Hansen, who jointly taught Man Ec with Bower for many years, lauded his colleague's continuing commitment to learning. "His has been a life dedicated to intellectual curiosity, scholarship, and teaching," Hansen said. "He has had a lifelong partnership with Tuck and Dartmouth and a tremendous impact on our students."

Herringer affirmed Bower's influence. "When I was 20 years old, he drove into me a couple of fundamental concepts that I took with me and have used for the rest of my business life."

Clearly moved by the honor, Bower cited the opportunities that Tuck has given him, eliciting laughter along the way. "Tuck has treated me better than I ever deserved," he joked. "Karl Hill offered me an associate professorship I didn't deserve…at a salary that I really didn't deserve! I've gotten more respect from my students than I ever deserved. And more help from my colleagues. Even now I get more tolerance from the existing faculty than I deserve."

He reserved his highest praise, however, for Dot Bower, whom he called "the source of the most support, affection, and tolerance."

"Naming this fund for Dick," said Dean Danos, "is a way of honoring someone who has great tenacity and intellectual curiosity, who has conducted brilliant research, and who has dedicated himself to teaching and stayed in contact with generations of students. He is the very model of the type of Tuck faculty member we wish to inspire through these seminars."