Angel Flight East pilot Andrew Morrison's volunteer medical missions are lifting the spirits of those who need it most. 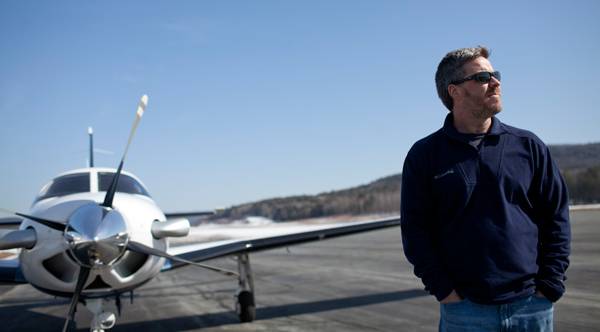 It's a beautiful midsummer day and Andrew Morrison T'93 is in his backyard, pushing his then infant daughter on a swing and watching the airplanes soar high overhead.

The moment takes him back to his own childhood, when he built model airplanes, taped pictures of planes to his wall, and believed that the greatest achievement of his life would be to learn to fly.

2005 convinced his wife, T'93 classmate Christina, to let him take a discovery flight at the airport near their home in Collegeville, Pa., about 30 miles outside Philadelphia. "I had so much fun, by the end of the hour I was vibrating," he recalls. "I went home and said, 'Honey, I've got bad news for you. I loved it.'" Flying was never something Morrison considered as a career. He studied finance at the University of Pennsylvania, where he met Christina, and went to work for a litigation support consulting company after graduating in 1988. The couple enrolled at Tuck in 1991 and got married the following summer. Morrison then spent six years working in business development for an energy company, leaving in April 2000 to take care of his first daughter, Stefanie.

"We wanted one of us to stay home, and my wife was an investment banker at the time—and a type A personality," he says. "We figured I was better suited for the job." Morrison describes the role of stay-at-home parent as either always or never working, depending on your perspective, but he enjoyed the years of changing diapers, visiting playgrounds, and ferrying the girls to and from school and soccer practice. He also completed a master's degree in education but determined that the hours teaching demanded of him were more than he wanted to spend away from his children.

Flying, however, was a dream he could pursue in his free time. Six months after his first discovery flight, Morrison got his pilot's license and bought a plane. Not long after that, he attended the annual fundraiser at Wings Field airport, where he saw an information table for Angel Flight East, a charitable organization that was looking for volunteer pilots to fly people to hospitals or medical centers for treatments. Often the families are in financial need, having spent their entire savings on the costs of a devastating illness. "My wife said, 'You should do this,'" Morrison recalls. "I'm not a supervolunteer, throwing myself into all kinds of different things, but something about this spoke to me.

Morrison's first Angel Flight passenger was a 3-year-old boy receiving chemotherapy treatments at UMass Memorial Medical Center for a rare form of cancer. The child's doctors had given the family permission to take him home for Thanksgiving weekend. Morrison remembers a bald little boy running around at the airport, excited about the trip with his mother. But on the flight they hit turbulence and the boy started throwing up. "I said to air traffic control, 'I'm an Angel Flight. I have a young patient back here and he's getting sick. Would you let me stay up higher?' Immediately they said, 'OK, climb to 6,000 feet and we'll keep you up there as long as we can.' That means they made a ton of work for themselves—they had to move jets out of the way for us. It was amazing."

When Morrison landed, the boy's father and five other children were waiting. "They came running across the ramp with huge smiles, and it was just the most joyful family reunion, and they were all saying, 'Thank you for bringing our little brother home!' It hit so hard because my youngest daughter was his age, and here this poor little guy was in the hospital, hooked up for 24 hours a day, and his family is thanking me. All I did was fly. I said, 'Thank you for letting me help.'" Since then, Morrison has flown about 10 missions, including one in which he transported a toddler and her grandmother from their home in South Carolina to a hospital in Philadelphia. As they flew over Chesapeake Bay, the grandmother told him she never dreamed she would see the ocean.

Since moving to Tewksbury Township, N.J., Morrison hasn't been able to fly as much as he'd like, but he has become the chair of the fund development committee for Angel Flight East. Adam Zucker, president of the organization's board of trustees, approached him for the position. Morrison, says Zucker, was a "no-brainer" for the role, bringing not only his Tuck connections but also a unique energy. "When Andrew talks about the missions, his eyes light up. He not only knows how to get people to give but how to get them engaged. And that's what we want."

Morrison's first mission stays with him, and the sad ending is that the boy died. "We drop in and out of their lives as pilots, but for a couple hours we're part of making them better. I get to share my passion with people, and they get to see the world from a different perspective. I'm so happy to be able to share that with them."

If you are interested in learning more about Angel Flight East and how you can support its mission, go to www.angelflighteast.org.