It’s Coming: The Internet of Things

Information technology allows objects to be monitored, analyzed, and controlled over Internet-style networks.

The Britt Technology Impact Series began its look at increased connectivity with a presentation by Christopher Mines of Forrester Research. 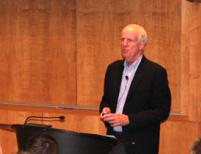 Farmers are wiring their dirt. Cities are controlling their wells, pumps, and pipes with computers. And soon, most trains in the U.S. will be able to be commandeered via remote control to avoid collisions. Each of these developments is part of what’s being called the “Internet of things” or the “connected world”—where information technology allows objects to be monitored, analyzed, and controlled over Internet-style networks.

When his clients ask him about next big thing in IT, Forrester Research senior vice president Christopher Mines tells them it’s the connected world. Mines visited Tuck on Sept. 25 and described the opportunities and challenges of this new technology for the enterprise world. His talk was the first installment of this year’s Britt Technology Impact Series, which is organized by the Glassmeyer/McNamee Center for Digital Strategies and is focusing on embedded technology and constant consumer connectivity.

Mines began his talk with a hypothesis: that increased software control of the physical world will improve business outcomes for companies across a wide range of industries. Broadly speaking, these improvements will come in the form of better use of assets, increased opportunities for differentiation of products and services, and heightened consumer engagement.

The Internet of things has been heavily hyped by the media, especially for its potential to change how we interact with our homes and cars. But Mines said those advances aren’t quite ready for primetime yet. Instead, the ripest opportunities in the connected world are in the more hidden realms of logistics, inventory tracking, transportation, and facilities. And even there, Mines notes, “the technological maturity in the connected world is far ahead of the operational and process maturity of companies.” In other words, the technology exists to connect many corporate assets, but it will take some time for companies to take advantage of it.

That fact is reflected in the results of Forrester surveys of technology implementers at corporations. Less than 10 percent of those surveyed have machine-to-machine communications systems in place, and 50 percent have no plan to implement such systems. The lag is caused, first of all, by the sheer complexity of the systems in question. But corporations are also worried that increased connectivity brings increased opportunities for security breaches. These concerns surround the safety of the connected assets themselves—such as electric grids—as well as the data they collect and the privacy of the individuals providing their data. “People are saying, ‘No thanks, I don’t want big brother knowing when I turn my dryer on,’” Mines said.

Given these challenges, why is now the time to usher in the connected world? Mines gave a couple reasons: attractive prices and easy availability of sensors and components, a competitive landscape where companies are fighting to give their customers the best services, regulatory compliance requirements (such as with the trains), and the changing expectations of consumers when it comes to technology. Thanks to the ubiquity of smartphones and apps, consumers are used to cheap, convenient software that makes their lives easier. “This will spread from consumers to enterprise,” Mines said.

The Britt Technology Impact Series will continue this conversation at its next event on October 10, with Chris Briggs, the vice president of marketing and business development at Buxton, a leading consumer analytics firm.