The Vermont project is one of 10 formed during the first of four residential periods in the Master of Health Care Delivery Science program, which draws on the expertise of Tuck and The Dartmouth Institute for Health Policy and Clinical Practice.

Robin Lunge’s job title is rather ambitious. As the director of health care reform for Vermont, Lunge must coordinate all the relevant governmental agencies—health, Medicaid, labor, tax, insurance—as Vermont implements the first state-sponsored, single-payer health care plan in the country. 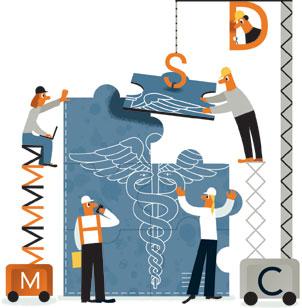 On July 5, just days after she assumed that role, Lunge arrived in Hanover as one of 47 members of the first class in Dartmouth’s Master of Health Care Delivery Science (MHCDS) program, which draws on the expertise of Tuck and The Dartmouth Institute for Health Policy and Clinical Practice.

But this was no academic idyll for Lunge. She’s part of a team of doctors and administrators whose action-learning project—the practical part of the curriculum—is to design the benefits package for Vermont’s new health insurance system.

The Vermont project is one of 10 formed during the first of four residential periods in the MHCDS program. Other teams are working on transforming health care’s focus from treating diseases to promoting health; reducing unnecessary cesarean births; integrating end-of-life services for obstructive lung disease patients and families; and creating a system of care for Iowa’s children and youth.

Brian Spence, another member of the Vermont team, is an anesthesiologist at Dartmouth-Hitchcock Medical Center. He became a doctor because he didn’t like seeing people in pain. Spence is excited about designing a benefits package that helps people prevent catastrophic illness through broad, reliable insurance coverage. “There’s an old saying that an ounce of prevention is worth a pound of cure,” he says. “And that’s true.”