Urges the use of management principles to improve school performance. 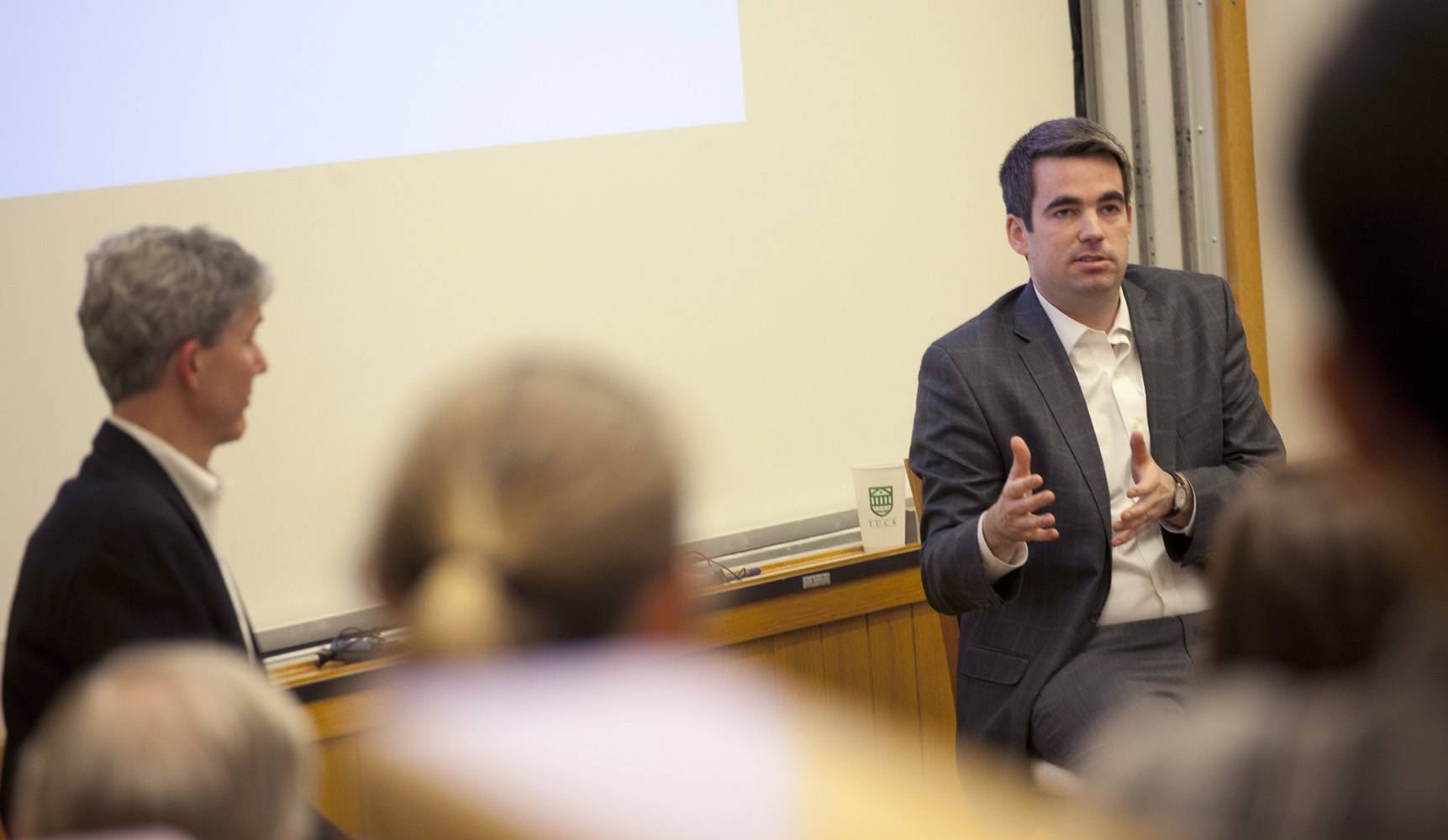 Kerr, the Massachusetts state director for Democrats for Education Reform, spoke with students during a News Hour event sponsored by the Tuck Education Club.

Liam Kerr T’12 grew up in a Boston suburb and thought the K-12 education system in America was pretty good. Based on his experience, grade school and high school were, if not exemplary, at least functioning well enough to see that he graduated and was prepared for college.

It wasn’t until after college that he had reason to believe otherwise. That was when he worked at an adult literacy program and met a high school graduate who could not read. All his life, that person had been lied to and shuffled through the ranks—the path of least resistance for his teachers and administrators. “I didn’t understand that the broader system was so broken,” Kerr recalled during a recent presentation to Tuck students about the United States’ education woes.

That experience stayed with Kerr though Tuck and led him to his current position as Massachusetts state director for Democrats for Education Reform, a political action committee that educates elected officials and supports reform-minded candidates for public office. It’s an unconventional career path for an MBA graduate, but not for lack of interesting challenges. “It was a blend of problems and opportunities that led me to education,” Kerr said.

Kerr was introduced by Matthew Slaughter, the Signal Companies Professor of Management and associate dean of the faculty. Slaughter’s research leans heavily towards public policy, and the state of the educational system in America has not escaped his scrutiny. It is, in a word, stagnant. The high school graduation rate today is about the same as it was in 1970: seventy-five percent. In the latest survey of 15-year olds around the world by the Organization for Economic Cooperation and Development, the U.S. ranked 15th in reading, 23rd in science and 31st in math. China scored first in each category. “The U.S. used to be at or near the top, in terms of adults with high school and college degrees,” Slaughter said. “Now we’re in the middle of the pack, and the change is in the wrong direction.”

Not surprisingly, that trend is bad for American businesses, who rely on a deep and wide pool of talent to manage their operations, innovate new products, and keep the economy growing. Slaughter highlighted a quote on this point from Bill Gates, former CEO of Microsoft: “When I compare our high schools to what I’ve seen traveling abroad,” he said, “I am terrified for our workforce of tomorrow.”

The consequences for national security are no less important, Kerr noted. Army generals are reporting that their recruits can’t read training manuals, and that less than five out of 250 intelligence personnel in Iraq had the aptitude to put pieces together to form a conclusion. Yet this isn’t a new problem. In a 1983 report by the National Commission on Excellence in Education, Glenn Seaborg warned that “if an unfriendly foreign power had attempted to impose on America the mediocre educational performance that exists today, we might have viewed it as an act of war.”

While these failures might be described as a management issue, the problem is much more complicated than that. Education policy is a deeply political concern, and teachers unions wield an enormous amount of power. The system is also huge and disaggregated, with funding coming from federal, state and local sources, so it’s hard to point to one person who is responsible for educating children in a given school. Even at the teacher level, accountability is spotty, Kerr said. His wife has taught at public and charter schools, and the teacher evaluations in each were about as different as they could be. In the public school, the evaluation was an 18-point checklist with two options: satisfactory and unsatisfactory. At the charter school, her evaluation filled a binder.

Business school graduates are starting to infiltrate education, bringing management principles in an effort to reform the system, Kerr said, but there has been push-back. “There’s this gigantic sector that’s relatively unchanged since the early 1970s—one teacher in front of the classroom, 20 students, no accountability—and you’re now trying to take that same system and put in all these measures to improve performance,” he explained. “You have to be careful with the language you use; the MBA-style approach puts a lot of people off.”

Yet for those willing to take on the challenges, Kerr said, education can be interesting, rewarding and stable work. A one-trillion-dollar industry, education is second in size only to the health care sector, and is resistant to economic cycles. Plus, a huge amount of money is being invested in education technology, and spending in other education areas is likely to be consistent for a long time to come. “And it’s fascinating,” Kerr said. “It’s innovation, how to reform federal grant making, and how to use technology to deliver educational materials. It definitely gets the intellectual side of your brain going.”