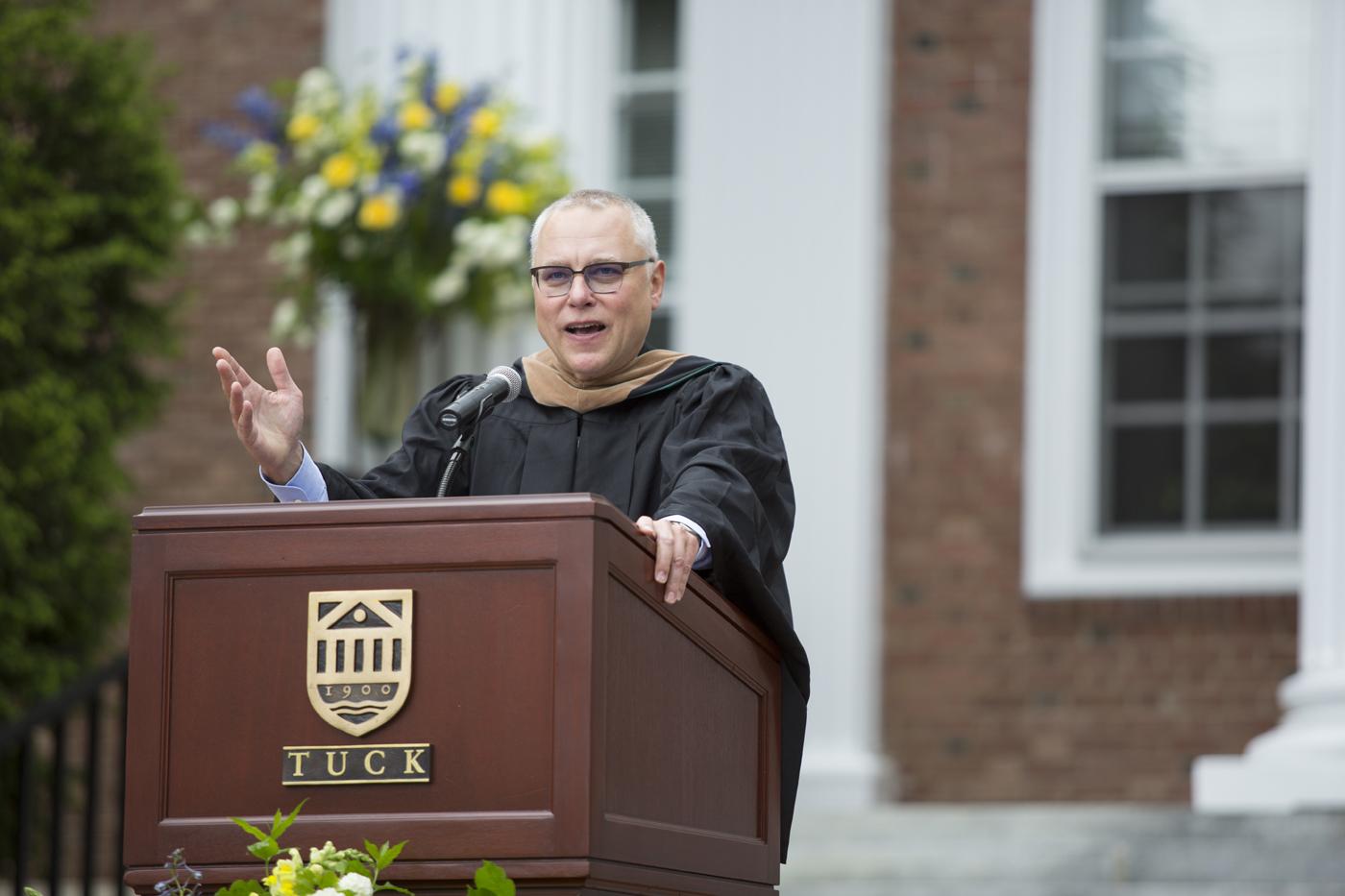 At age 19, Zdenek Bakala T’89 spent months in a refugee camp before coming to America with little more than a greasy $50 bill in his wallet—money he converted on the black market and hid in a sandwich when he fled Czechoslovakia. It was on the long bus ride from New York to California that Bakala learned an important monetary lesson. “You’d be surprised,” the businessman, investor, and philanthropist told 266 Tuck graduates in his Tuck Investiture address June 8, “how many hot dogs $50 can buy.”

Only a decade later, having acquired the ability to speak English, an MBA, and a resume ranging from washing dishes in a casino to investment banking jobs in New York and London, Bakala returned to Prague in 1991. Credit Suisse First Boston had tapped him to establish its operations in the new Czech Republic. “Those were the days,” said Bakala. He was referring to the era after the fall of communism in Central and Eastern Europe, when globalization and free markets were spreading with a velocity never seen before in history.

“What an opportunity for entrepreneurial lawyers, bankers, and consultants,” noted Bakala. “We had the privilege of helping to shape the policies and implement the transactions that rolled back the government’s involvement in the economy, and helped create the conditions for a thriving market democracy.”

From Credit Suisse, Bakala went on to create (and then sell) Patria Finance, the Czech Republic’s first private investment banking group. In 2004, he co-founded BXR, a diversified investment group with a global portfolio of assets. In the same year, BRX acquired OKD, a major Czech hard coal mining company, now part of New World Resources. In May 2008, after operations were streamlined and consolidated, the $2.1-billion IPO set records on the Prague and London stock exchanges.

Tuck Investiture is a ceremony for graduating Tuck students and their guest, during which awards are presented and master's hoods are conferred. At the request of a student, for the first time ever the event was streamed live on the web, and was made possible through a collaboration between Tuck and Dartmouth College. Additional speakers this year included class president Maximilian Pinto T’13, who presented the class gift to the school, and student speaker Walter Fogarty, Jr. T’13. Christopher Williams T’84, chair of Tuck’s board of overseers, presented the overseer’s medal to fellow overseer Don M. Wilson III T’73, executive chair of Tuck Annual Giving.

“Don Wilson is a man of impeccable standards and intelligence, and he has used both in his many years of dedicated, passionate service to Tuck,” said Williams, who lauded Wilson for his work in helping to grow Tuck’s alumni participation rate from 60 percent to a record-breaking 71 percent. “While Don’s effect on Tuck could be expressed in numbers, his impact on the school has been truly immeasurable.”

Bakala acknowledged that members of the class of 2013 won’t enjoy the same entrepreneurial freedom that engendered his own heady mega-deals. In response to the economic crisis of 2008, many countries “dusted off an old friend”—state capitalism. The present economic transition is a policy-dependent environment, Bakala cautioned. “The government will be your competitor. It will pursue opportunities in competition with private business, and it will never ever shy away from using its business influence to advance its domestic or international political agenda.”

But that doesn’t mean the world isn’t still rich with opportunities, he added. Indeed, the underlying fundamentals have never been stronger. The world is freer, safer, and more prosperous than any time in history. Paraphrasing Malcolm Gladwell, Bakala continued, “You need to be at the right place at the right time, as I was, but it’s your own analysis that will guide you to that place in time.”

In closing, Bakala shared a handful of further insights. Don’t be afraid to occasionally disregard what you’ve been taught at Tuck. Don’t be afraid to do something instinctive, impulsive, and to make contrarian decisions. And lastly these words, all the more profound coming from a man who risked everything to flee the oppression of a communist regime, only to return there and make his fortune: “Life,” Bakala reminded these graduates on the cusp of pursuing their own professional destinies, “will always surprise you.”

Watch the Investiture Ceremony on Video

If you are unable to view the stream, please click here to watch the ceremony on YouTube.