The “Morning Joe” co-host shares her personal and professional journey. 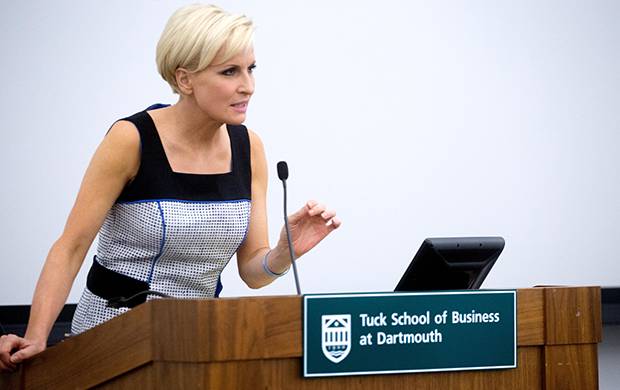 The “Morning Joe” co-host shares her personal and professional journey in a Tuck Initiative for Women Symposium talk.

As a Williams College student, Mika Brzezinski visited her then-boyfriend at Dartmouth several times, none of which turned out to be a good experience. Whether it was the time he forgot to pick her up at the bus station in the freezing rain or the time he arranged a date with another girl the same weekend she was visiting, Brzezinski never forgot the epiphany he inspired.

“That was my first ‘Know Your Value’ experience because I did not marry him,” she said with a laugh during her April 30 keynote address at the second-annual Tuck Initiative for Women Symposium.

Referencing the title and theme of her 2012 book, “Knowing Your Value: Women, Money, and Getting What You're Worth,” Brzezinski shared personal and professional insights gained during a career where she’s anchored the “CBS Evening News Weekend Edition,” served as a CBS news correspondent, and co-hosted MSNBC’s “Morning Joe” with former U.S. congressman Joe Scarborough.

“Mika and I work so well together. When people ask me, ‘What do women do better?’ I say, ‘Just about everything,’” Scarborough said. “If you want to get things done, have a woman run your office. Women have run my business life for 25 years: they’ve run it in Congress, in law, and now Mika runs it in media.”

“However, that’s the same quality that sometimes doesn’t get women to the top,” Brzezinski responded. “That’s the balance women have to strike. We can’t let being task-driven doers keep us down because we’re so good at it. We have to communicate effectively so that gets us somewhere.”

Accordingly, Brzezinski discussed what she’s learned from her own journey as well as the overall challenges and opportunities women face in the professional sphere. Here are some highlights of her talk, in her own words: