In a Center for Global Business and Government event, MIT economist Peter Diamond says the U.S. must address its unemployment crisis now. 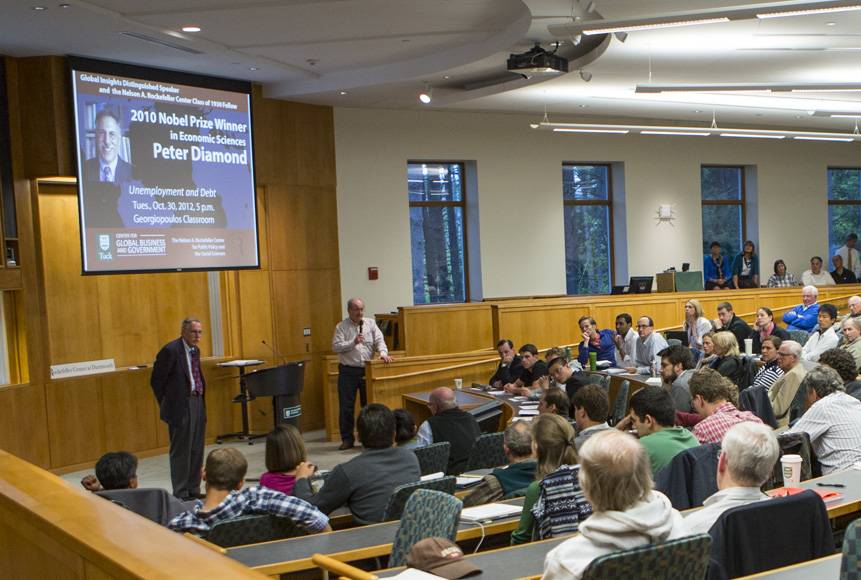 In a Center for Global Business and Government event, MIT economist Peter Diamond says the U.S. must address its unemployment crisis now.

The United States has a lot of problems, but none as dire as the country’s current “crisis” in unemployment, said Peter Diamond, a Nobel Prize-winning economist who visited Tuck May 15 to deliver a talk entitled “Unemployment and Debt.”

Diamond, a 1930 Fellow at the Nelson A. Rockefeller Center for Public Policy at Dartmouth, came to Tuck as part of the Global Insights Distinguished Speaker Series, organized by the Center for Global Business and Government. He, along with Dale T. Mortensen and Christopher A. Pissarides, won the Nobel Memorial Prize in Economic Sciences in 2010 for their development of frameworks that could answer two important questions: Why are there many job openings but also many unemployed people, and how can economic policy affect unemployment?

In Diamond’s view, policy makers in Washington, D.C., have their priorities turned around. They consider the high debt-to-GDP ratio a crisis that must be addressed immediately, and relegate unemployment to the pile of national concerns that can wait until later. “My view is exactly the opposite,” he said. “We have an unemployment crisis, something that ought to be addressed right away, and we have a debt problem.”

A crisis, according to Diamond, is basically a problem with an acute urgency, and he argued that unemployment in the U.S. meets that criterion because of its severe and long lasting effects on the economy. He highlighted two examples to prove his point: the scourge of long-term unemployment and the diminished prospects for young people entering the job market today.

The long-term unemployed consist of people who have been out of work for at least six months. For most people, being without a job for six months casts an irrevocable pall on the rest of their career. “On average, when they come back to work, they will have a 30 percent wage cut that will last for the rest of their lives,” Diamond said. “Many of them have left the labor force and won’t come back at all.” This is not only bad for workers and their families; their lost productivity drags down the economy for years.

Young people ready to join the workforce have a similar but distinct challenge. In normal times, young workers see their wages rise rapidly until their mid-30s, something that economists say is due to the accumulation of experience and skills, and their discovery of the right job for their abilities. But what happens when this demographic emerges from college during a recession? “It impacts the earnings curve so that there are lower earnings for a decade after you leave school,” Diamond said. “The longer we go on with high unemployment, the more we’re going to have people suffering this pattern for years into the future.”

Diamond admitted that his solution to the unemployment crisis is nothing new: economic stimulus that will drive growth. Specifically, Diamond recommends investments into long-term infrastructure projects—such as the U.S.’s ailing bridges, tunnels, and roads—and into workforce education and basic research.

While those investments should begin as soon as possible, Diamond opined that the problem of the national debt should be addressed with more deliberation. That’s because the nation’s debt-to-GDP ratio hasn’t risen to the level where bond-holders are worried about the government’s ability to pay them back. “The U.S. is viewed as unusually safe for good reason,” he said: “We have enormous potential capacity for raising taxes and addressing the debt, something that would be much harder in Greece or Italy.”

For Diamond, the way to avoid a debt crisis is obvious: reform Social Security. “It’s money-in, money-out,” he said, “and we know how to fix it.” He added that social security is a revered safety net, and nobody is afraid that it will go away, so reforming it inherently has more credibility than do oft-proposed spending cuts.

In sum, Diamond said, “put policies in place that will actually happen and that will phase in slowly so don’t they hurt unemployment and yet have a big impact on future debt. That’s a good thing to do, but we don’t have to do it right away.”