Nursing the U.S. Economy Back to Health 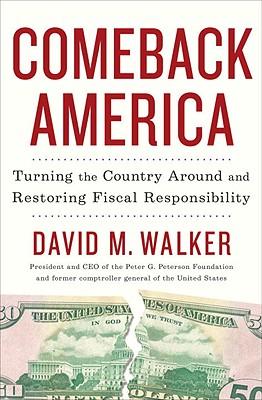 In July 2007, David M. Walker appeared on CBS’s “60 Minutes” with an urgent message. “We suffer from a fiscal cancer,” he said. “It is growing within us. And if we do not treat it, it could have catastrophic consequences for our country.” Not exactly a subtle warning, especially when it comes from the U.S. Comptroller General, whose job is to ensure the fiscal and managerial accountability of federal government. He was referring to the U.S. national debt, which at that time was $8.7 trillion and 64 percent of the national gross domestic product. Projections indicated that in 12 years, interest on this debt would be the biggest outlay in the federal budget.

Nobody could predict that things would get a lot worse for the U.S. economy in 2008, when it was hit with the Great Recession and committed roughly $800 billion to deal with the credit crisis. Since then, the situation has deteriorated considerably. The national debt—$14 trillion and quickly climbing—is now about equal to GDP. According to Walker’s calculations, revenues in 2022 will be just enough to cover Social Security, Medicare, and Medicaid.

Walker has since stepped down from his position as the government’s auditor. In 2008, he collaborated on the documentary film “I.O.U.S.A,” which brought the dire state of the federal balance sheet into stark relief. The following year, he published Comeback America, a book that outlines a plan to get the country back on track. Walker gives his updated diagnosis of the country’s finances and offers prescriptions for recovery to the Tuck community on May 5.

Walker comes to campus at the invitation of Robert A. Howell, the David T. McLaughlin D’54, T’55 Distinguished Visiting Professor of Business Administration. Howell teaches finance and accounting at Tuck and was impressed by a talk Walker gave in Washington, D.C., in October. “He doesn’t have an axe to grind or a constituency to whom he is beholden,” Howell says. “So he can call it the way he sees it, and I think he will open the students’ eyes dramatically.”

Fundamentally, the problem with federal fiscal policy is that we spend far more than we take in. Only governments can continue this behavior for an extended period of time. “If you ran a business like this, you’d be out of business,” Howell says. “The MBA students are the leaders of the next generation, and this is a managerial problem.”

Left unaddressed, the trajectory of revenues and expenses could cause the United States to default on its loans. Greece suffered a similar fate last year and was bailed out by the European Union, which required the country to implement an austerity plan. “But who’s going to bail out the United States?” Howell asks. The answer is far from clear.

Walker’s policy and spending suggestions might be our best hope. “He’s probably one of the most knowledgeable people in the country as to the financial condition of the U.S. economy and what needs to be done to fix it,” Howell says.