Tuning in from all around the world—from South America to Asia—participants watched 68 speakers discuss alternative proteins, food safety issues, robotics, and more.

As the COVID-19 pandemic continues to upend life around the world, Tuck’s student-run Virtual Summit on AgTech (VSAT) was timelier than ever this year, sparking new debate about how agriculture and technology can help prevent and mitigate future outbreaks and ensure the safety of the global food supply chain.

Earlier this month, over 900 students, investors, entrepreneurs, and AgTech industry professionals from 48 countries logged online to attend Tuck’s 2020 Virtual Summit on AgTech, setting a new attendance record. The three-day virtual conference which took place May 5-7—hosted by Tuck’s Center for Private Equity and Venture Capital and the Tuck Food and Agriculture Club—was especially popular with students. They made up 27 percent of the audience coming from 46 different educational institutions around the world.

“I thought it was incredible that we were able to generate such wide international interest with this conference, even though we were planning the event from Hanover,” recalls Jim Feuille, the executive director of the Center for Private Equity and Venture Capital who helped Tuck students get the event up and running. “We were able to triple the size from last year’s event across the number of speakers, amount of content delivered and number of audience members in attendance. It was a huge success, and it was almost entirely student-organized.”

Over the three-day event, attendees tuned in from all around the world, from South America to Asia, to watch 68 speakers discuss alternative proteins, food safety issues, robotics, analytics and other of-the-moment AgTech topics. One of the student organizers, Kristin Ng T’21 wrote in a blog post, there was no shortage of topics to choose from, with 21 hours of content spread out over 36 sessions beginning at 12:00 PM each day (U.S. Eastern time). 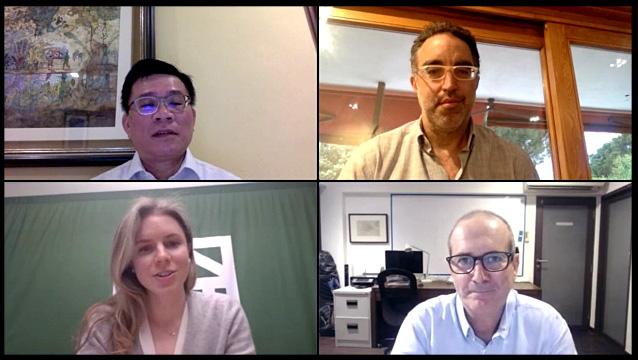 “AgTech is a sector that has been growing a lot,” says Alberto Ariztía Tagle T’20, a native of Chile who organized this year’s conference alongside 10 other Tuck students. “Analytics, the Internet of Things, drones, and other technologies have really changed the industry dramatically in recent years.”

Ariztía and the Tuck students who planned the conference aimed to feature plenty of different topics by recruiting speakers such as Tom Chi, a founding partner at One Ventures and the former Head of Experience at Google X. Chi kicked off the first day of the conference as the first of seven keynote speakers, providing a timely discussion of agriculture’s environmental footprint, the challenges of having enough food for the world’s growing population, and how technology can be used to improve and modernize the farming process.

While the idea of an online conference doesn’t seem so unusual now in the world of COVID-19, it was a novel concept last year when the conference began. At the time, Feuille was helping Rachel Baras and Matt Baer, both T’19s and former Venture Capital Fellows, pick a Fellow’s research project. Both were interested in AgTech and were Chairs of the Tuck Food & Ag Club. Feuille had an entrepreneur acquaintance who used an online interactive video platform to hold a virtual, online conference for programmers, and he wondered if Tuck students could do the same for AgTech. It turned out, they could.

One of the core principles of the conference was the idea of democratizing access to thought leadership—taking the position we had as Tuck students and leveraging that for others. The virtual platform, low (and donated to charity) registration fee, and use of Tuck as the ‘venue’ all contributed to that.

“We built our own website, and we did our own marketing,” Feuille says, noting that the cost of hosting an online conference was far less expensive than having to travel to a traditional event, with airfare and hotel costs. “The Tuck students hosted every session, and they did all the interviewing, without any professional moderators.”

Feuille, Baras, and Baer each tapped into their personal connections to enlist speakers, which drew in the audience, and then Baras and Baer put their creativity to work using Crowdcast, a live streaming broadcast platform.

Baras, who helped design the event last year, says that her team cast a wide net and tried to cover many different facets of AgTech. She recalled that “Redefining Natural,” a panel focused on urban farming and regenerative agriculture, felt like “a real conversation,” something that can be tricky to pull off on a panel, let alone a virtual one. During the course of the event, attendees could write their comments in an interactive chat bar on the side of the screen, and could type in questions, which were then ranked in order of preference by audience voting on them, in a Q&A box at the bottom of the screen.

While AgTech has certainly grown in popularity over the last few years, no one, not even Feuille or the student team, expected that the conference would generate such impressive worldwide interest. The Tuck team came up with their own hashtags and used social media platforms Twitter, Instagram, and LinkedIn, gathering new followers including VSAT attendees and speakers, and other AgTech professionals and companies, creating additional momentum and interest.

I chose Tuck because I knew that I would be able to do what I was passionate about. Thanks to this conference, I was able to build my network, and I’m now connected to people in the main AgTech sectors all around the world. That’s something I wouldn’t have been able to do before coming to Tuck.

The conference was also designed with low barriers to entry so that everyone could afford to attend. Attendees were asked to pay a minimum $5 contribution to charity, and by the end of the summit, over $9,000 in proceeds were raised for the Conference’s two designated charities: the National Young Farmers Coalition and Feeding America.

“One of the core principles of the conference was the idea of democratizing access to thought leadership—taking the position we had as Tuck students and leveraging that for others,” says Baer. “The virtual platform, low (and donated to charity) registration fee, and use of Tuck as the ‘venue’ all contributed to that. It has always been inspiring to me to be able to bring people together and see others learn and grow because of that.”

While the conference generated valuable discussions about AgTech, it was also an opportunity for Ariztía  and other Tuck students, to put what they learned in the classroom to work in the real world.

“I chose Tuck because I knew that I would be able to do what I was passionate about,” Ariztía says. “Thanks to this conference, I was able to build my network, and I’m now connected to people in the main AgTech sectors all around the world. That’s something I wouldn’t have been able to do before coming to Tuck.” 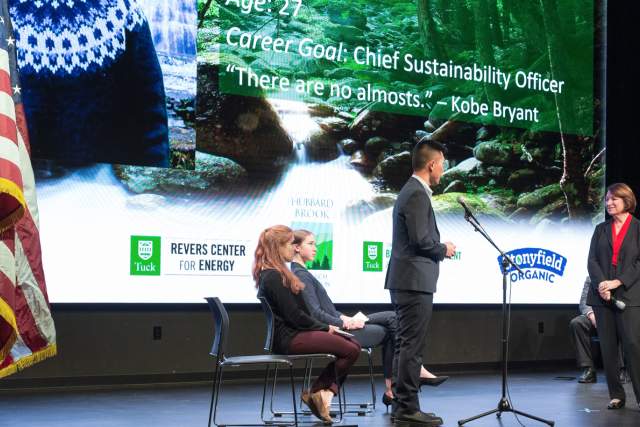 In a town hall co-hosted by Tuck, Stonyfield Organic, and the Hubbard Brook Research Foundation, students shared the stage with 2020 presidential candidates and asked about their plans to combat climate change. 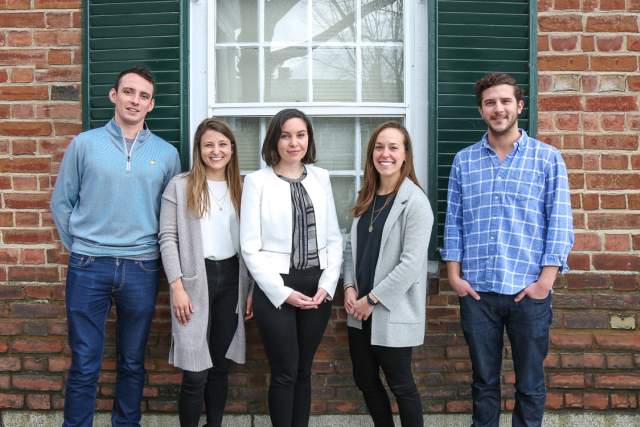