Patagonia veteran Vincent Stanley on the company’s quest for sustainability.

Vincent Stanley, a 40-year veteran of Patagonia and co-author of “The Responsible Company,” spoke to students about the company’s quest for sustainability. 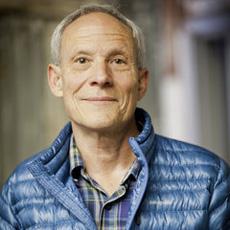 Forty-one years ago, Patagonia was a small business in Ventura, Ca. that was deeply inspired by wilderness, making steel pitons that climbers used to ascend sheer rock faces. But when climbing routes were being damaged by climbers repeatedly hammering their pitons into the rock, Patagonia (then called Chouinard Equipment) found an alternate product—the wedge chock—that offered the same protection as pitons without the negative environmental effects. It published a persuasive essay on the chocks in its fall 1972 catalog, and pitons rapidly receded into history.

Today Patagonia has annual sales of $500 million, but its mission statement still reflects the practicality and ideology of its early years: to “build the best product, cause no unnecessary harm, and use business to inspire and implement solutions to the environmental crisis.”

How Patagonia has been able to grow yet maintain its values was the topic addressed by Vincent Stanley, the company’s acting vice president of marketing, in a talk entitled “Patagonia’s First 40 Years: Achieving Profits Responsibly.” A nephew of Patagonia founder Yvon Chouinard, Stanley has been with the company since 1973. He visited Tuck at the invitation of the Center for Business & Society and, after his talk, had lunch with a select group of Tuck students.

The piton issue showed Patagonia that its business could be successful and have a positive effect on the environment. The lesson came up again in 1988 in Boston, where the company opened its third retail store. Immediately after the store opened, employees began calling in sick with severe headaches. It turned out that they were inhaling toxic chemicals that were off-gassing from the new cotton clothing stored in the basement. The chemicals had been applied to the cotton as pesticides and, later on, to prevent mildew in shipping. Realizing that the conventional cotton industry was harming the environment as well as Patagonia’s employees, the company decided to shift to organic cotton, taking a mere 18 months to alter the supply chain for 66 products. “We had to pray for rain, guarantee the loans of cotton farmers, and learn all the processes of clothes making,” Stanley explained. “It really taught us how to talk to suppliers and negotiate.”

In 2005, Patagonia focused on the other end of the product lifecycle, initiating the Common Threads clothing recycling program. First it started taking back used Capilene underwear, which it would send to Japan to be melted down, re-extruded and turned into new underwear. Then it added fleece to the list, and in 2010 the company announced it would accept any of its clothes to be recycled. This “cradle-to-cradle” sensibility came out of the belief that it wasn’t sufficient to make better products that were less harmful to the environment; “we also had to question what we make and not buy what we don’t need,” Stanley said.

Patagonia took a more public step in that direction in 2011 when it bought a full page advertisement in the New York Times for its R2 fleece jacket. Departing sharply from the typical marketing message, the advertisement declared “Don’t Buy This Jacket,” and then explained the ecological footprint of the product and urged customers to not “buy what you don’t need” and “think twice before you buy anything.” It was a bold way to both tout its own high-quality, long-lasting products, and discourage the kind of rampant consumerism that is hurting the planet.

It’s unlikely such a strategy could come out of a public corporation, and the Chouinards know it. They could have sold the company years ago, but they “wanted to use the business as a pulpit and laboratory,” Stanley said. Toward those ends, Stanley and Chouinard co-authored “The Responsible Company,” a book that attempts to show other businesses how they can become more sustainable. Patagonia also worked with Walmart to create an index of social responsibility for the apparel industry. Called the “Higg Index 1.0,” the indicator-based tool helps companies evaluate their product inputs and facilities to gauge sustainability and make improvements. The index is an effort by the Sustainable Apparel Coalition, which has 82 members and includes names such as Nike, Levi’s and H&M.

Patagonia is still small compared to the Walmarts and Nikes it is trying to influence, but its successes over the years have given the company confidence to effect change on a larger scale. Stanley is optimistic about corporate sustainability, especially because most MBA graduates today have had some exposure to it during business school. Tuck is no exception. With its Center for Business & Society and courses such as Business and Climate Change, Tuck students have many opportunities to learn how businesses can make the economy more sustainable.