The founder and chairman emeritus of the Blackstone Group addressed the Tuck community in a Newshour event in anticipation of the Republican presidential debate.

About eight hours before the Republican presidential candidates sat down in Dartmouth’s Spaulding Auditorium on October 11 for a debate about the economy, private equity leader and philanthropist Peter G. Peterson addressed the Tuck community in a Newshour event entitled, “The Debt Threat: Fiscal Policy and the American Dream.” 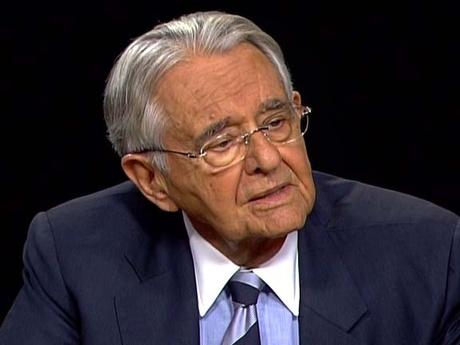 Peterson, 85, the founder and chairman emeritus of the Blackstone Group and former chairman and CEO of Lehman Brothers, cashed out of the private equity business in 2007 and created the Peter G. Peterson Foundation, an organization devoted to raising awareness of the unsustainable nature of America’s national debt, budget deficits, entitlement programs, and tax policies.

In a conversation with Matthew Slaughter, the Signal Companies Professor of Management and associate dean of the MBA program at Tuck, and Josh Tyrangiel, the editor of Bloomberg Businessweek magazine, Peterson called the national debt, which is projected to rise to nearly 200 percent of GDP, “the most important threat to America’s future.”

Peterson  has taken a personal interest in this issue because he sees it as a danger to the American dream. He explained how his parents, Greek immigrants who settled in Nebraska and ran a diner, worked tirelessly to afford Peterson “the best education money can buy,” putting him on a path to Northwestern University and then the University of Chicago. These days, with the median income for males no better than it was in 1967, the idea that parents can give their children a better life is in jeopardy, he said.

In contemplating how to put his substantial wealth to good use, Peterson “decided, on the one hand, that I wanted the American dream to continue,” he said, “and that on the other hand, if it was going to continue, we’d have to invest much more in science, education, and training, but that one had a moral responsibility to identify how we did it, rather than just talking about it.” His foundation, along with the Peterson Institute for International Economics, strives to do just that.

One way to reign in the national debt, Peterson said, is by reforming entitlement programs such as Social Security and Medicare. Already, these mandates are under stress from rising health care costs and the growing elderly population, trends that are only projected to worsen. For Peterson, the question is how to reform these programs in a way “that’s moral and yet substantive enough to do something about it.” His ideas for reform revolve around wage indexing; progressive reductions where “the wealthy get less and pay more,” he said, “because I think it’s the moral and politically necessary thing to do.”

The most recent evidence of the country’s ability to deal with its debt problems is the debt-ceiling debacle this summer in Congress. To Peterson, the episode was mostly a failure because it not only reduced the world’s confidence in the U.S. government and economy, but produced just $1.5 trillion in budget cuts, a mere token payment on the $10-trillion deficit that’s projected by the end of this decade. The dysfunction has continued into the election cycle, where all eight Republican presidential candidates oppose a hypothetical deficit-reduction plan that would raise $1 in revenues for every $10 in spending cuts. “We’ve become so theological and locked in to these positions, that it’s either all spending cuts or all revenue increases,” Peterson said. “Let’s quit this ideology where any increase in revenue is going to destroy this country.”

Notably, Peterson said, business leaders have been no more helpful than political leaders have been. CEOs, he said, are not focused enough on the long term, and they’re afraid to have their comments twisted and echoed by the media’s megaphone. As an example of the power of business leaders to effect policy change, Peterson recalled the CEOs who went out on a limb to support the Marshall Plan after World War Two. Though the vast majority of Americans were against the idea of spending U.S. dollars on strengthening Europe, the Marshall Plan proved to be a great success.

“If the business community were active today, they would be a potent force,” Peterson said. “But, by and large, they are missing in action.”