The health care industry is one of the last big pieces of the economy yet to be fundamentally changed by advances in communication and the Internet, says Peter Neupert T'80, co-founder of Drugstore.com and MSNBC. 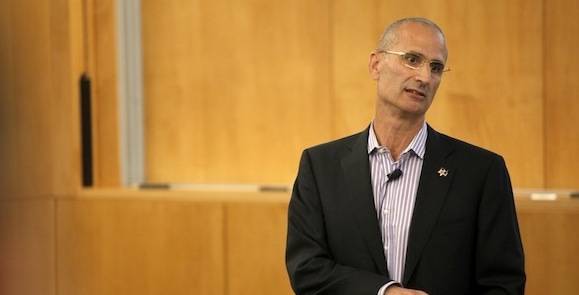 The health care industry is one of the last big pieces of the economy yet to be fundamentally changed by advances in communication and the Internet, says Peter Neupert T'80, co-founder of  Drugstore.com and MSNBC.

“I believe in the opportunity to transform health care using technology,” Peter M. Neupert T’80 told an audience of Tuck students and faculty at a recent talk sponsored by the Uhrig Health Care Initiative Speaker Series.

That belief has manifested itself in Neupert’s career since 1998, the year he left Microsoft to co-found Drugstore.com. With the help of investors like Jeff Bezos and the venture capital firm Kleiner Perkins Caufield & Byers, Neupert took Drugstore.com public in 1999 with a market value of $600 million. Neupert served as the president and CEO until 2001, and as the chairman of the board until 2004. Last year, the company was sold to Walgreens for $450 million.

These days, Neupert still plays an active role at the intersection of health and technology. He is an operating partner at Health Evolution Partners, a private equity firm that invests in rapidly growing health care companies.

The title of Neupert’s talk was “Will Internet Innovation Ever Transform Health Care—And Why You Should Care.” It’s a question Neupert has been posing for a long time. He joined Microsoft in 1987 and saw how the company radically changed how businesses operate. Then he helped found MSNBC and saw how technology could transform media. The health care industry, which represents about 18 percent of the U.S.’s gross domestic product, is one of the last big pieces of the economy yet to be fundamentally changed by advances in communication and the Internet (another one is education).

Why this is the case is a matter of some debate. For Neupert, the reason is that the end user—the patient—is not the decision maker when it comes to services and price. The true “buyer” of health care is usually the corporations that purchase health insurance for their employees, “and for many years, corporations were unsophisticated buyers,” Neupert said. “They didn’t care about the cost of health care.” Furthermore, there are structural deficiencies in the market that make shrewd buying almost impossible: there’s no price transparency and no alignment of incentives between producers and buyers, because insurance companies stand in the middle.

The result is that the U.S. has a health care system that is both lower in quality and more expensive than those of many other nations. According to a report by the Institute of Medicine, 98,000 people die in the U.S. every year from preventable medical errors—the equivalent of a 747 jet crashing three times per week, 52 weeks per year.

“Where is the consumer outcry?” he asked. Plus, the country has accumulated $55 trillion in unfunded health care liabilities. “We are at a breaking point,” Neupert said. “It’s time to start doing things differently.”

Among the solutions is something Neupert described as “4P medicine”: preventative, predictive, personalized, and participatory. For example, there are 12,000 codes for diagnosing illness, but zero codes for wellness care.

In addition, Neupert said the country has been focused on the wrong problem: access. “That’s not the core issue,” he asserted. “We need to improve value.”

After his talk, Neupert joined a select group of students for lunch and then held office hours. Neupert also dined with five students at the Canoe Club, in Hanover.