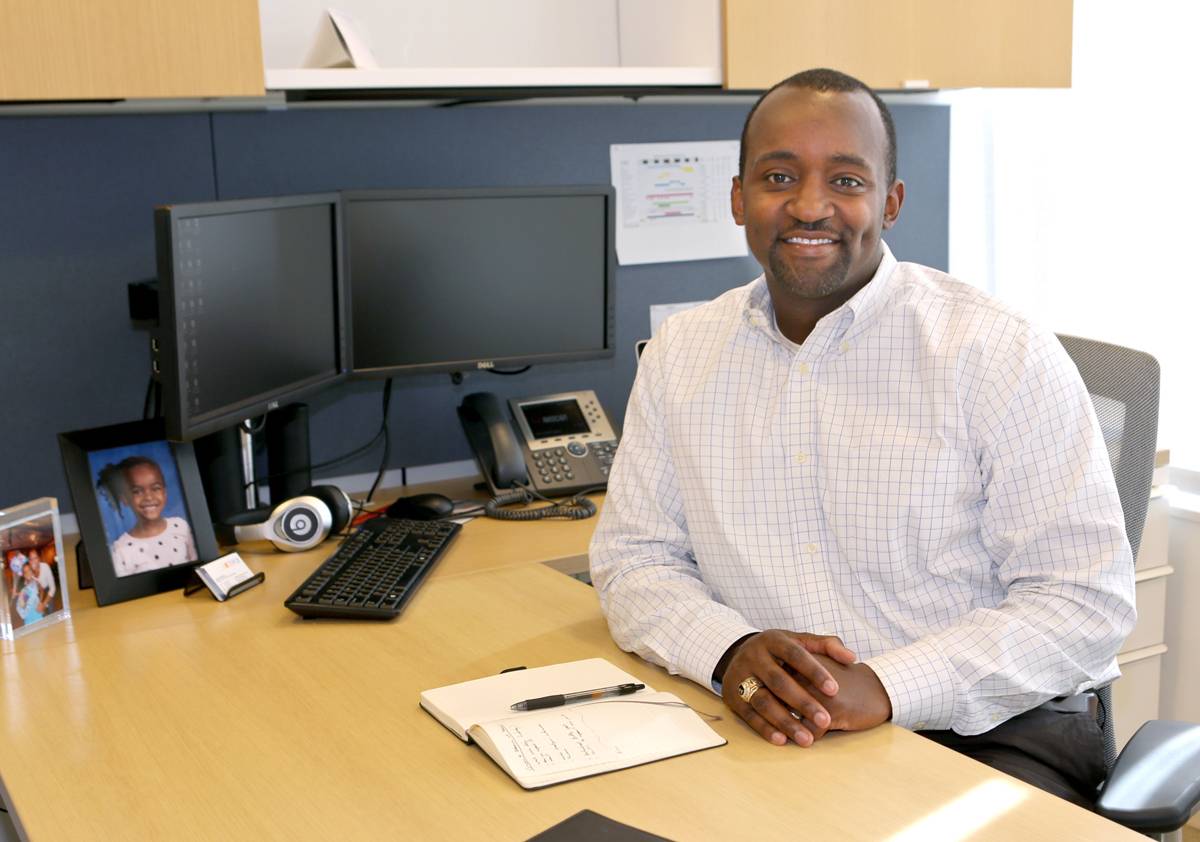 Kenny Mitchell D'97, T’04 brings a passion for sports to his new marketing position at NASCAR.

One late afternoon in February, Kenny Mitchell T’04 sat in his new office in NASCAR’s Florida headquarters and, in preparation for the upcoming Daytona 500, did what he does best: deftly field phone calls, hold meetings, manage an advertising agency several states away, work with employees in a handful of departments, and confidently coordinate a web of assists in the fast-paced game of marketing. It has been a while since he dribbled a ball on a basketball court, but Kenny Mitchell plays the point guard everyday.

“I like to tell people that I am a point guard through and through,” says Mitchell. “Point guards know how to get the ball in people’s hands, so they’re well positioned to succeed and everyone wins. That’s the motto I’ve adopted in my career and it’s the approach I take here.”

It’s also a large part of the reason why NASCAR hired the 10-year sports-marketing veteran as managing director of brand and consumer marketing late last year. When Mitchell started in December, NASCAR was one of the few sports he didn’t know all that much about. But his lifelong passion for games had already primed him for a position leading NASCAR’s effort to ramp up engagement among young, millennial, and multicultural fans.

Raised in Philadelphia, Flint, Mich. and Wilmington, Del., Mitchell grew up playing basketball on neighborhood courts, learning how to work hard and think quickly. By his senior year at Dartmouth, he led the nation in assists and, after graduating, played professionally in Liga Portuguesa in Portugal and for two semi-pro teams in the states—the Delaware Blue Bombers and the Lehigh Valley Bulldogs.

He landed his first major professional role at TMP Worldwide, a digital ad agency where he became director of business development. There, a dream started to materialize: Mitchell wanted to marry his lifelong love of sports with a burgeoning passion for marketing. The idea led him to Tuck, where he hoped to discover opportunities to do just that.

“Tuck was eye-opening for me,” says Mitchell. “I learned a ton that I almost didn’t expect to learn, like some of the intangibles around people management and style and approach. I left as a much smarter utility player and can go into a lot of different battlegrounds and really be successful.”

After Tuck, Mitchell worked at Gatorade, exploring a series of positions in product innovation, advertising, communications, brand development, and sports marketing, where he oversaw relationships with professional sports teams and negotiated contracts with sponsored athletes. Finally, he helped launch Gatorade’s action-sports platform, a marketing program that targeted a new generation of athletes like skateboarders, BMX riders, and freeskiers. The experience led him to his next role at the NBC Sports Group, where he acted as general manager and vice president of the Dew Tour, a series of action-sports events throughout the United States.

When Mitchell got the call about a job at NASCAR, he balked. He was a self-described stick-and-ball-sports guy. What did he know about car racing? But then he started to learn about the people at NASCAR, which, he says, has one of the best leadership teams in sports.

“What I was really excited about were some of the audacious goals around transforming the business to have long-term sustainable growth,” says Mitchell. “And some of the really important priorities that the company has around its growth agenda are focused on the marketing arena. It’s unique to have a big-scaled sport with a strong, passionate fan base going through a transformation.”

One of NASCAR’s key strategies is to gain fans in different cultural and age groups in order to better reflect the U.S. population—and prime the company for growth over the coming decades. So far, Mitchell has implemented marketing, public relations, and social media strategies around the company’s season launch, sustainability platform, flagship events, and a partner race series in Mexico, among other programs. He also helped produce Spanish-language ads aimed at growing NASCAR’s Hispanic fan base, which started prior to his arrival at the company.

Car racing may, at first glance, seem nothing like basketball, but between the passion of the fans and the speed of the action, Mitchell feels right at home in his new position, a stone’s throw from the stadium for the Daytona 500. “It’s really exciting and fast-paced,” says Mitchell about the races. “It’s a big old fun show.”