Racism in America and Hope at the Tuck School

Dean Matthew Slaughter shares his reflections on the latest racial troubles in the United States, inviting all those in the Tuck community to summon their capacity for empathy and understanding. 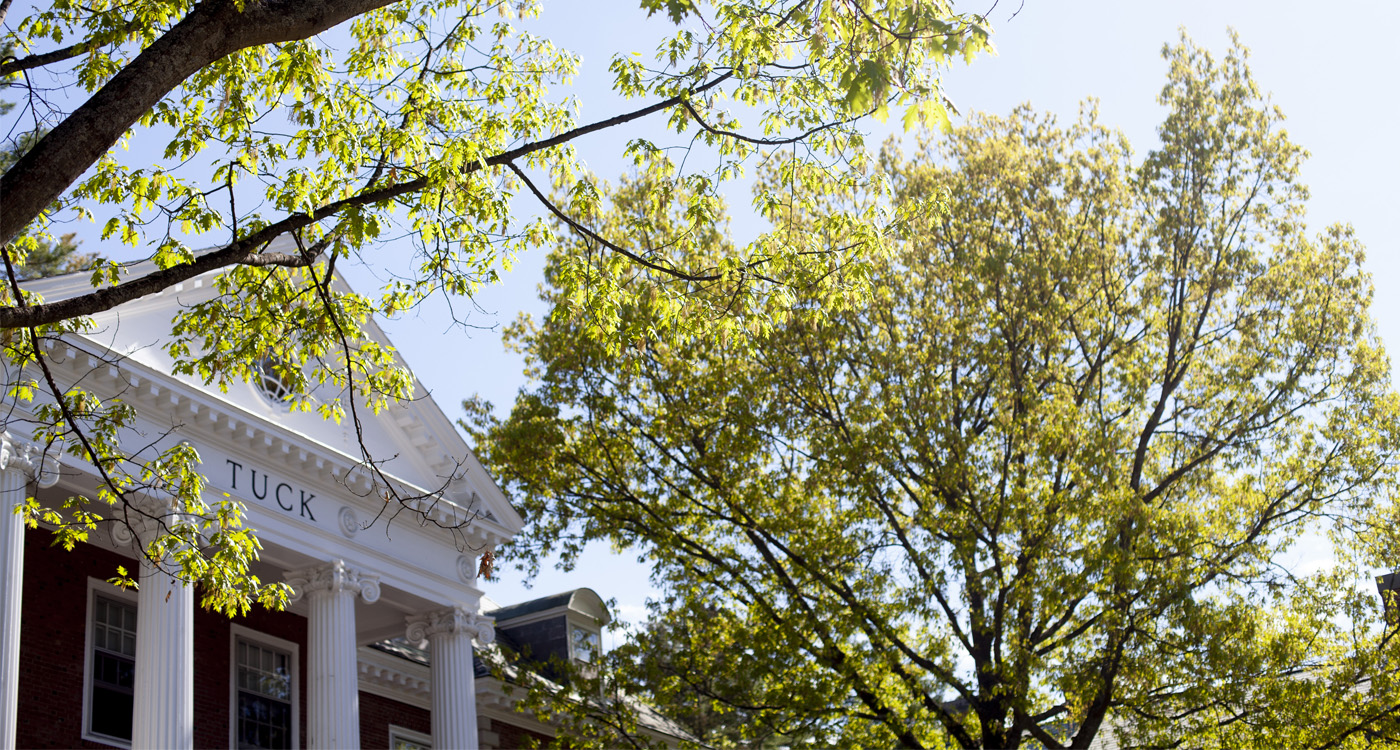 With deep sorrow yet also with hope in our Tuck community, I am writing to share some reflections on the latest racial troubles in the United States.

A week ago today, in my hometown of Minneapolis a 46-year-old black man named George Floyd died.  Mr. Floyd died after being arrested, handcuffed, and held face down on the street with a knee on his neck from one of the four arresting police officers until he became unresponsive and emergency medics were summoned.  The officer who knelt on Mr. Floyd for at least eight minutes is white and has 18 complaints on his official record; he ignored both Mr. Floyd’s repeated pleas of “I can’t breathe” and the entreaties of several anguished bystanders videoing the tragedy.  In the wake of Mr. Floyd’s death, anger has exploded across America – and, adding insult to injury, in many locations the justified anger has been overtaken by violence that threatens public order and safety.  Protests and riots have broken out in dozens of U.S. cities; the National Guard has been called up in many cities, including to help protect the White House.

Mr. Floyd was the latest victim in a too-long list of black men, women, and children to suffer horrific deaths in America at the hands of police officers – or of fellow citizens claiming to take justice into their own hands.  Consider the time just since our Tuck spring break to today.  On March 13, 26-year-old Breonna Taylor – an EMT and aspiring nurse – was killed in her bed in her apartment in Louisville, shot at least eight times by police officers executing a search warrant.  In early May, a video recorded in late February went viral of a retired police detective and his son in Georgia chasing down in their truck and shooting in the middle of the street 25-year-old Ahmaud Arbery, who was out jogging.

This month closes my fifth year serving as dean of the Tuck School, and during my tenure no societal issue has caused more persistent and more painful concern among our School than racism in America.

I would like to offer three reflections on this tragic state of affairs.

First, I would like to state unequivocally that the Tuck School does not condone or tolerate racism in any form.  We create, teach, and apply life-changing business knowledge in a personal and immersive community.  To succeed in this mission, racism – overt or hidden – has no place in any aspect of our distinct Tuck community.

Second, I would like to acknowledge the anguish and trauma that many members of our Tuck community are feeling over these recent deaths and events.  I know that this pain is especially intense for some of us, and that this pain can make it difficult to face usual daily matters right now.  I urge any faculty, staff, or students who would like to speak to a counselor on their own behalf or out of concern for someone else to please contact the Faculty/Employee Assistance Program, the College Chaplain’s Office (603-646-3772), or the MBA Program Office.

Third, I would like to invite all of us at Tuck – especially the majority of us who are white – to summon our capacity for empathy: first to better understand the damage of racism in America, and then to consider what new capabilities we might create at Tuck to better equip all of us to engage with racism and other wicked social problems relevant to business leadership in today’s complex world.

In our School’s mission statement, the word “wise” reflects the functional expertise at the heart of strategic thinking and management, the analytic skills used to develop and defend points of view, and the empathy to understand and work effectively with others.  Empathy is usually much harder than sympathy.  Empathy requires you to stretch to relate to another person’s history and feelings, when you yourself have not experienced that same history and feelings.  Empathy also requires the other person to be patient and graceful with your stretching, which can be uncomfortable and awkward.

In the past few days, I have tried to empathize to better understand how being a white male American has protected me from the experiences of black Americans like George Floyd.

On Friday afternoon, I joined a conversation about recent racial events with several Tuck students and staff.  I was struck by black students – students who are about the same age that Breonna Taylor and Ahmaud Arbery were – sharing that they are exhausted by the daily pressure of being concerned for their physical safety.  And me?  In my entire life, not once have I ever felt unsafe because I am white: not lying in bed, not jogging, not anything.

On Saturday afternoon, Sally Jaeger and I attended on the Dartmouth Green (masked and socially distanced) a gathering to decry racism.  At one point, one of the speakers stood with her 10-year-old son and shared that every time she leaves the house to grocery shop for their family, he implores to her, “Mommy, please come home safely.”  And me?  Of the gazillion times I have gone to the Coop grocery store for my family, not once have my sons Nicholas or Jacob voiced concern for my safety.

Yesterday afternoon, I was reading the speeches and writings about racism by various American leaders.  In a 2016 Senate session on race, the only two black senators at the time – Cory Booker (D-NJ) and Tim Scott (R-SC) – each gave powerfully personal remarks.  In particular, Senator Scott shared how time and again over his accomplished career, he has been harassed by law-enforcement personnel – even as a Senator at the U.S. Capitol.  “For those who don't know, there are a few ways to identify a Member of Congress or Senate … you have an ID badge, a license you can show them, or this really cool pin … It is easy to identify a U.S. Senator by our pin.  I recall walking into an office building just last year after being here for five years in the capitol, and the officer looked at me, full of attitude, and said, ‘The pin I know, and you I don't. Show me your ID.’  I will tell you, I was thinking to myself, either he thinks I am committing a crime, impersonating a Member of Congress, or – or what?  Well, I will tell you that later that evening I received a phone call from his supervisor apologizing for the behavior.  That is at least the third phone call I have received from a supervisor or the Chief of Police since I have been in the Senate.”  And me?  During my two years in U.S. government – in a role far less important than a sitting U.S. Senator – when spending my days among the White House complex and the U.S. Capitol buildings, not once was I singled out for any extra identification check.

All this reflection has been hard.  But it has allowed me to understand more deeply “the daily, disproportionate risk that black people feel just by virtue of being black.”  And with this deeper understanding, I hope that I can better support how black members of our Tuck community manage to move through this difficult time in America.

More generally, I firmly hope that if all of us at Tuck – again, especially the majority of us who are white – summon greater empathy, we can better equip our School to engage with racism.  Our expanded understanding can spark new ideas for what new capabilities might strengthen our School in this way, a goal to which our School leadership is strongly committed.  In this spirit, I thank T’21 Rod Milligan and the BSAT Club for hosting their May 19 “Ask Me Anything Chat” about the impact of the Ahmaud Arbery killing.  As I and Sally and other School leaders explore other meaningful ways to expand our understanding and capabilities at Tuck, we also stand ready to hear any other ideas and suggestions.

Finally, I encourage each of us to reflect on at least one wise, decisive leader who can inspire your thinking on all these issues.  I will close by sharing the words of one such leader for me, Robert F. Kennedy.

On the late afternoon of April 4, 1968, Reverend Martin Luther King, Jr. was assassinated in Memphis, where he was supporting striking African American sanitation workers.  Former U.S. Attorney General and current U.S. Senator Robert F. Kennedy, who was campaigning for the Democratic presidential nomination, learned that Dr. King had been shot just before boarding a short flight to Indianapolis for a large campaign rally.  Upon landing, Senator Kennedy was informed that Dr. King had died.

On the ride from the airport to the rally site, Senator Kennedy ditched the planned speech and composed the outline of some fresh remarks.  His aides voiced grave concern that this rally, located in a heavily African American neighborhood, might devolve into violence upon hearing the news of Dr. King’s death.  Senator Kennedy ignored this counsel.  From the back of a flat-bed pick-up truck, he delivered a speech of just five minutes that has since been repeatedly hailed as one of the greatest in American history, excerpts of which have been etched into a memorial at Arlington National Cemetery (and which you can watch or hear and read here or here).

That night, rioting befell over 100 American cities – but not Indianapolis.  Just 63 days later, with his Democratic presidential nomination virtually secured, Senator Kennedy was himself tragically assassinated.  The racial goal for the United States that he voiced 52 years ago remains very much in need today.  That continued need is very sad, but it is also very much a leadership opportunity for every one of us.

Amidst this time of the coronavirus pandemic continuing around the world and now of renewed racial pain in America, please keep taking good care of yourself and your family.