As CEO of Gyrobike, makers of a Dartmouth-originated technology, Daniella Reichstetter T’07 is taking her passion for cycling to the next level.

Like most people, Daniella Reichstetter T’07 has firsthand knowledge of the pain associated with learning to ride a bike. The training wheels come off, a parent extends a steadying hand, and the child starts to pedal. Then the parent lets go and a balancing act ensues, with predictable—and bruising—results. “Learning to ride a bike is one of the most challenging things a kid learns,” says Reichstetter. But as CEO of Gyrobike, makers of a Dartmouth-originated technology that takes at least some of the discomfort out of this childhood rite of passage, Reichstetter says it doesn’t have to be this way.

Gyrobike’s flagship product, Gyrowheel, replaces the existing front wheel of a standard kids’ bike. It lessens the two-wheeler learning curve through a technology that helps keep the rider upright at low speeds by re-centering the bike under his or her own weight. The key is a disk that spins independently within Gyrowheel at speeds up to 2000 RPMs, creating a force—called gyroscopic precession—that stabilizes the bicycle. Seeing, as evidenced in a video demo on the company website, is believing. “Training wheels actually teach incorrect riding technique,” explains Reichstetter. “When you learn to ride a bike, you have to lean into gravity to prevent yourself from falling over, but training wheels teach you to do the opposite—to lean away from a fall.”

“This was about building a product and business from scratch and for me, that was awesome,” says Reichstetter.

The idea for Gyrobike’s technology came out of the Thayer School of Engineering six years ago. After filing the initial patent, the student team then turned to Tuck to help bring the product to market. Errik Anderson T’07, Reichstetter’s classmate, teamed up with the Thayer students and helped write the original business plan with fellow Tuck classmates. “It was during my second year that the inventors started to get serious about looking for someone to move this forward,” she recalls. “In April, a couple months before graduation, I committed to it.”

This is when the real work began. “It was nice to have a plan that business school minds had put together,” recalls Reichstetter. “But then I had to apply the startup mindset—that everything could cost twice as much and take twice as long—and tweak the plan in that direction.” 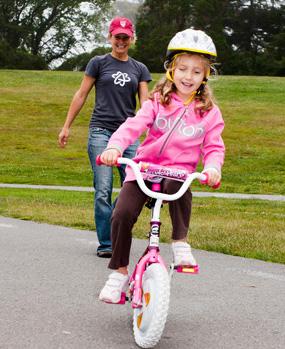 Reichstetter had startup experience in the consumer packaged goods industry before coming to Tuck, beginning with green home care products company Method. “I was the fifth employee and it’s now national brand with 100 SKUs and a presence at Costco and Target. I learned what it took to take a new product to market.” Reichstetter also worked for Jetboil, manufacturers of backpacking stoves that can famously boil two cups of water inside of two minutes and did a Tuck project for tent manufacturer Nemo. Gyrobike, however, presented Reichstetter with a different kind of opportunity. “Everything else I was thinking of doing was already formed. But this was about building a product and business from scratch and for me, that was awesome,” she says. “It was the best thing I could possibly imagine.”

After establishing the licensing agreement for Gyrowheel’s technology in 2007, Reichstetter’s team spent the following year developing the product. Gyrowheel first hit the market in December 2009 with a 12-inch model. Reichstetter says she can’t disclose sales figures beyond saying she’s “pleased,” particularly after selling out of its newest Gyrowheel, a16-inch version, just weeks after its release this spring. Which is, of course, both good and bad. “It gets into all of those classic business school discussions about how much inventory to build and how to anticipate demand,” she notes. “It’s nice to feel loved, but it would be nicer if we were fully monetizing this product demand.”

Gyrowheel also benefitted from significant national media attention, with stories appearing in Parents, Wired, Real Simple, The New York Times, Popular Science, and on The Today Show. “We’ve garnered an unbelievable amount of press,” she says. “We have a highly demonstrable product. You don’t need a degree in physics to understand our product. You just have to watch a YouTube video or see it in person.”

Reichstetter acknowledges that daily life for her is likely different from her Tuck peers who have gone on to work at larger firms. “Every single day has wins and losses. There are challenges and pleasant surprises.” Case in point: “The same week we were featured in Real Simple we also ran into a production delay and weren’t sure we would meet the availability date published in the article.”

Though Reichstetter has charged forward in building the brand with limited staff—Gyrobike has just five employees—she remains connected with Tuck and leverages its resources. Last year, a team of students participated in a First-Year Project to help Reichstetter identify target customers for Gyrowheel. Along the way, they debunked a myth that this is primarily a product with mommy appeal. “The students did a survey to determine our target market,” she said. “It’s a pretty even split between moms and dads—anyone who has a child three and up. The tendency may be to think that moms make all the decision for kids,” she says. “But because this is an outdoor toy and a gadget of sorts, dads like it too. When we tested our product in Golden Gate Park in San Francisco,” she adds, “probably 90 percent of the time it was the dad who was teaching the kid to ride the bike.”

What’s next for Gyrobike? “We need to increase distribution and lower costs to reach a wider base,” she says. The company is currently selling online and is expanding its presence in bike shops and toy stores across the United States, with plans to enter international markets in the next six months. And while a standalone Gyrowheel is the only product currently available to consumers, Reichstetter says Gyrobike is already working on a full-bike model as well as a product line for adults for the future. And why not? They’ve already reinvented the wheel.