Sachem Village, home to Tuck’s married and partnered students, fosters the strong sense of community and teamwork that threads through the entire Tuck experience.

It's a cloudless morning in the Upper Valley and Eli Miles T'10, his wife Monique, and their two-year-old son Elijah are taking one of their first strolls through their new neighborhood, the revitalized Sachem Village, located just down the road from the Dartmouth Green. They've only been here a few days—Eli recently shed responsibilities associated with his job as director of operations for a Bostonbased nonprofit—and many of their possessions are still in moving boxes. But a picture of what their life will be like in the year ahead is quickly coming into focus. 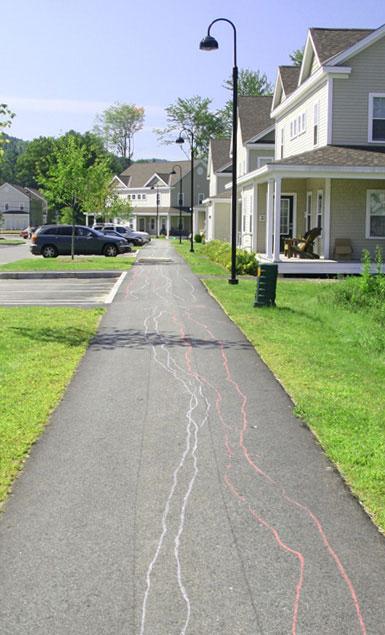 As they walk, they step over colorful sidewalk chalk drawings made by children in this neighborhood occupied primarily by Dartmouth's married and partnered graduate students. Eli waves politely at a neighbor as they pass, though he has yet to drop by and formally introduce himself. There are tricycles and wagons on many front porches; a pair of Adirondack chairs sits invitingly on a patch of grass nearby. It's a Saturday, so many of Eli's classmates have converged on the field at the end of the street for their weekly game of flag football. Before Eli joins them, he chases his son around the playground and playfully hoists him high above his head.

Though they may not know it yet, the sense of camaraderie the Miles family has encountered in their new neighborhood hints at what's to come over their next two years at Tuck. As most any resident of Sachem Village can attest, the close—some would even say camp-like—quarters help to engender the strong sense of community and teamwork that threads through the entire Tuck experience. To the uninitiated, Sachem's closeknit environs may seem a bit much—students go to class, attend study groups, and then return home to see many of the same people at the end of the day. But Sachem residents, past and present, see it differently. Relationships take on greater meaning forged through these multiple contexts. And the capacity to learn from one's peers, one of the signature strengths of the Tuck MBA, is strengthened by the collective setting.

With its white painted fences, handsome street lamps, and wide sidewalks, Sachem Village circa 2009 bears little resemblance to Tuck's original married and partnered housing, the result of a nationwide demographic shift following World War II. To accommodate the wave of American men, many of whom were married, returning from military service on the GI Bill, Dartmouth erected a cluster of temporary two-story buildings behind the Thayer School of Engineering. For residents, enduring life in what would become known as Wigwam Circle was a kind of badge of honor.

"The structures were likely converted barracks-type buildings for the V-5 or V-12 naval officers group that was enrolled at Dartmouth from time to time during the war," says John Wiseman T'56, who lived in Wigwam's austere accommodations while at Tuck. "It was basically one room and a kitchenette. You had a small bedroom. The bathroom consisted of a shower stall, small sink, and a john. The outdoor stairway leading to the second floor apartment was exposed to the elements. There was one window, maybe two if you had a corner room."

The lack of natural light was of minor concern for Wigwam residents like Wiseman, whose only means of staying warm was a single, oil-fed space heater. "You'd drop dead if I told you the cost of oil," he says. "It was delivered by truck from Lebanon or Norwich and was priced at a lofty seven cents a gallon." Wiseman also remembers sitting in his room studying and hearing what sounded like an earthquake but, in reality, was a backhoe pushing snow against the side of the building for extra insulation. The grounds crew's improvisation seldom worked, Wiseman points out. He distinctly recalls the morning his wife stepped into the shower only to find its basin covered with a halfinch thick layer of ice, "frozen solid like a hockey rink."

What Wigwam Village lacked in creature comforts, however, it more than made up for in community. For Wiseman and his classmates, life in Tuck's earliest married student housing development proved to be an intense bonding experience. "We were all friends," he continues. "We never really left Hanover. Back then there was no I-91. There were no nightclubs; the nearest tavern was in White River Junction. It's been 60 years, so it's hard to remember all of it, but I can still recall friends' faces and their dispositions. Wonderful memories."

For those who didn't have the pleasure of experiencing Wigwam's rustic charm up close, Sachem Village, with its 1930s-style white clapboard cabins, was a suitable alternative. Stu MacKay T'63 was a resident of Sachem in the early 1960s. He arrived on the July 4th weekend with his wife and 15-month-old son and immediately made friends with his classmates and their families, frequently getting together with them for dinners. Back then, a potato field sat in the spot that today is occupied by a playing field. After the farmer harvested his crops, says MacKay, Sachem residents would occasionally sneak over and collect what was left along the field's edges to cook and serve as a side dish for dinner.

"I've never worked as hard as I did when I was at Tuck," continues MacKay, who put in long hours of study time in addition to his demanding class schedule. But living at Sachem made the experience seem more manageable. "We were all in the same boat," he says.

This was the experience for the majority of married and partnered students at Tuck, 90 percent of whom were living in Sachem Village by the 1970s. Things began to change after 1983, however, when Tuck increased its student body by nearly a third, straining the inventory of available off-campus housing for students with families. A second increase to the student population in 2000 meant more families would be "a little cut off from the rest of the community," says Penny Paquette T'76, assistant dean for strategic initiatives. Clint Kendall T'97 was fortunate to live in Sachem Village during this period. For Kendall, who was 25 and married, but without kids, Sachem was a community within a community; he recalls meeting residents as they walked their dogs or took their kids trick-ortreating on Halloween. But it wasn't just the neighborhood or the experience of living next door to people at the same stage of life that he found so appealing. It was what surrounded them. "We loved the woods," says Kendall, who spent hours exploring the trails wending through the wilderness that enveloped their home. The terminus was a pristine lake they would often have all to themselves. "I'm not sure many of the locals knew about it because it was always deserted," says Kendall.

Sachem Village today retains much of this rural character, although early residents would have difficulty recognizing the old neighborhood.

In 2005, Dartmouth began the first phase of new construction at Sachem, expanding the quality and number of units available to satisfy the growing need for additional housing. By 2007, 125 new units had been completed, with an additional 80 units added in the second phase of construction beginning later that year.

Sachem now consists primarily of one-, two-, and three-bedroom town homes ranging in size from 700 to 1,200 square feet. For the most part, the new town homes have bedrooms and one or two full bathrooms located on the second floor, with a dining area, kitchen, living room, and half bath on the ground floor. "Many of the changes reflect the fact that our students are now older," says Paquette. "Therefore, more of them have children and have lived in other less basic environments."

Gone are the days of using snow as insulation. Today, a central, two-million-Btu biomass boiler heats much of Sachem Village, with propane used only as a backup. Hot water from the central boiler building is pumped to the individual buildings through a network of insulated underground piping. 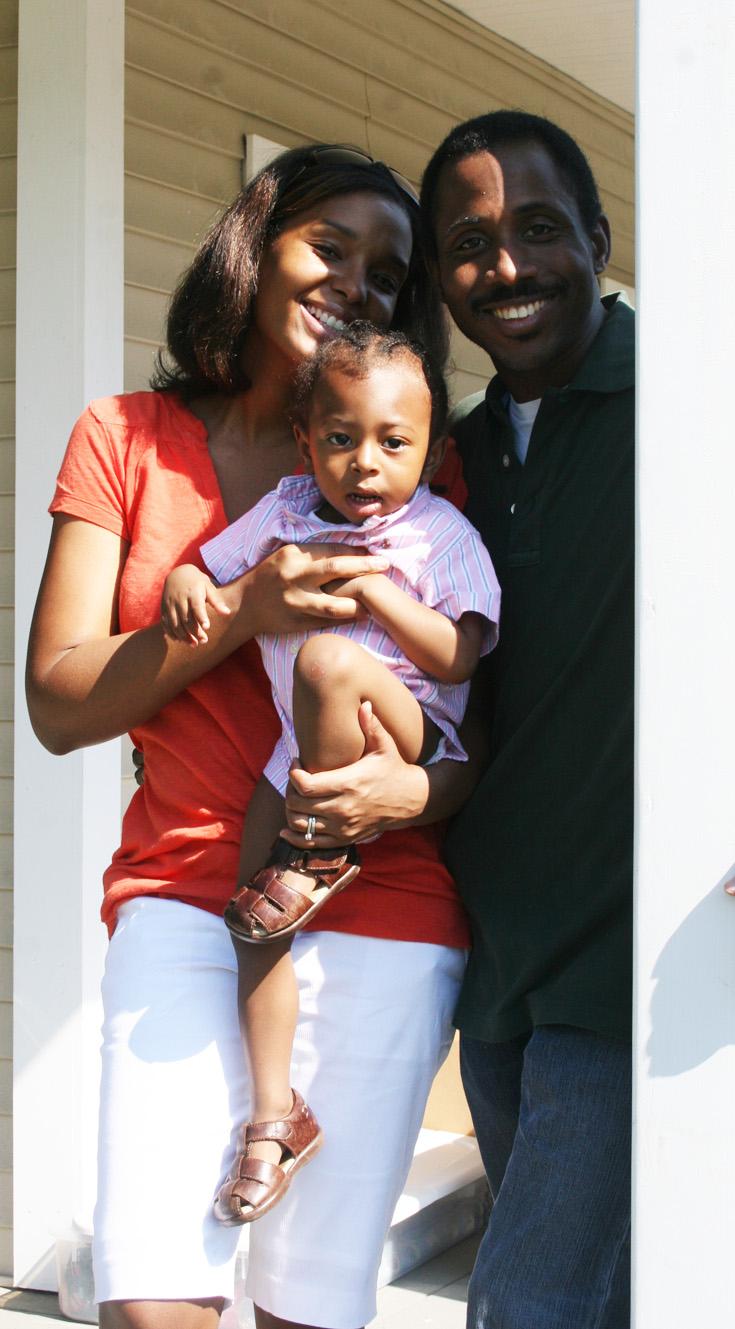 Eli Miles has come to know his neighbors well in the months that followed those first days at Sachem. Monique has taken Elijah to events in the Tiny Tuckies program and has developed close ties with a group of mothers who get together with their children to play on a grassy slope on their street. The couple has also learned the location of a good farmer's market from a friendly neighbor who moved in a month before they did.

For the Miles family, who lived in Boston prior to coming to Tuck, the less-hurried existence at Sachem has been a welcome surprise. "It was a transition," Eli admits. "I used to be able to walk out my door and get just about anything I wanted. But here we have a porch that we can sit on and enjoy the evening. I'm getting used to this lifestyle."

Meanwhile, as classes began, he realized a distinct difference between the working world and life at Tuck. Balancing family time with classes, his study group, and homework hasn't been easy. But living in Sachem has made juggling these multiple priorities easier. "It's easier for all of us."

There are, of course, other options besides Sachem Village for Tuck students with families. However, those who have lived at Sachem say there's no better way to get to know one's peers than living in this collective setting. "Many of the things we do at Tuck aren't just for the students," adds Paquette. "They are also for the spouses and children because we realize the significant support role that families play."

Among Tuck students, there is considerable debate over who has it easier. Those who come to Tuck on their own, without a spouse or partner, sometimes assume that certain aspects of daily existence—cooking and fostering a social life—are facilitated by having a family at home. A family, the thinking goes, helps with the demands of daily life, which means the student can devote more time to studying. What's missing in this assessment, however, is something everyone who has been through it understands, regardless of where they lived. The strength of this support network cannot be overstated, nor can the value of help from others at the same place in their lives. As Sachem proves, success at Tuck sometimes takes a village.