As head of online sales for the search giant's new Boston office, Brian Schmidt T'06 is living the company's credo of "test and iterate." 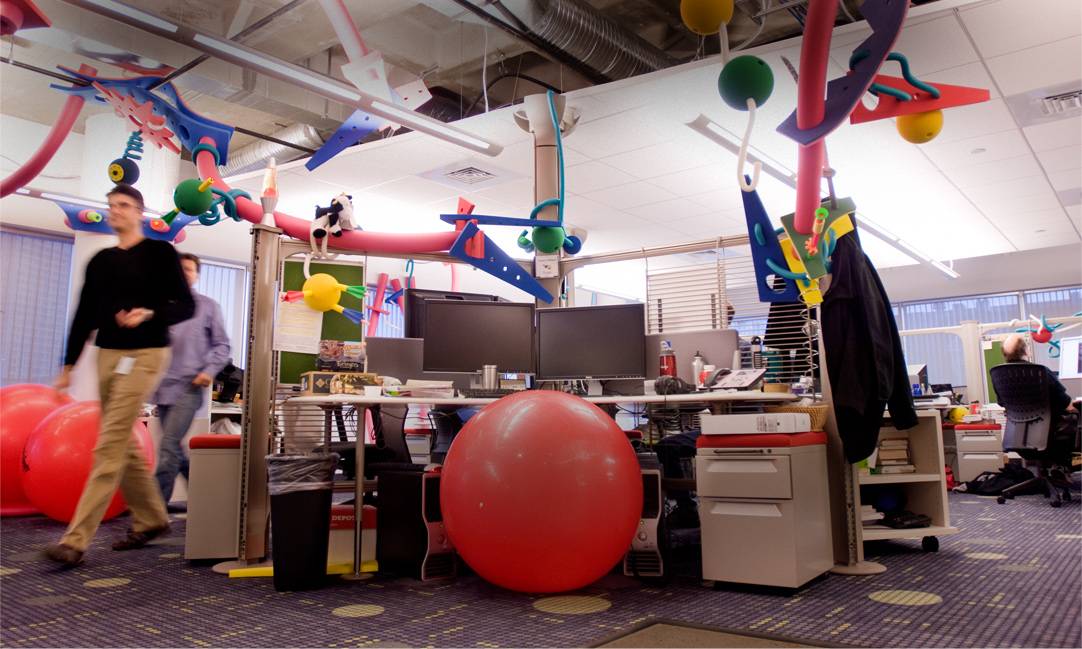 When Brian Schmidt T'06 applied for a job with Google five years ago, the odds appeared slim that the search giant would hire him. At the time, the California-based company was receiving an estimated 150,000 resumes per month.

Piled atop each other, as one writer recently noted, this would be the equivalent of a stack of paper at least 50 feet high. But Google has built its reputation on cutting through just this sort of clutter. Extracting the most relevant pieces of information from very large data sets, some would say, is what the company does best. So it should come as no surprise that Schmidt made it past all the initial applicant screenings. This, however, was just the beginning of his lengthy candidate-review process with Google.¨

For his summer internship as a first-year Tuck student, Schmidt flew out to the company's headquarters in Mountain View, Calif., and talked his way into an interview with the help of another Tuck alum. Between his internship and securing a full-time position after Tuck, Schmidt estimates he went through 30 interviews. "During one, I was asked, 'If you were an inanimate object, what would you be?'" he recalls. In another, the interviewer took him out of the office for a walk around the block. "He started asking math questions and would make up scenarios and ask me hypothetical questions far outside my comfort zone in order to see my approach to problem solving, like how I would go about setting up a hospital," he says.

Now Schmidt finds himself on the other side of the interview table. As head of office, online sales, at the recently established Boston office, he's tasked with growing one of the most lucrative parts of Google. "In the last two years, the Boston office has grown tremendously, and we will continue to grow by aggressively hiring throughout 2010," he says. And while his hires aren't put through the same interview process he was, Schmidt still seeks out many of the same qualities in prospective candidates.

Google's official hiring criteria, explains Schmidt, involves four elements. There's a cognitive element (How smart are you?); teamwork ("We all own everything"); leadership (Can you make something happen?); and "Googliness," that certain something that puts you a cut above the rest and makes others want to work alongside you. You also need to be flexible to succeed at Google, notes Schmidt. "You operate in an environment that changes constantly. We launch new products all the time, and you need the ability to roll with it. Since I've been at Google, I've had five managers. I've relocated to three different offices. One day, my manager said, 'Brian, we want to build a Boston office,' and two quick years later we have an office of more than 250 people across sales and engineering."

Schmidt says the leadership skills he learned at Tuck have been indispensable at Google. "Being at Tuck really taught me how to partner with people," he notes. "At the end of the day, I have 150 people I'm responsible for. To be successful, I have to manage disparate personalities and figure out how to communicate with and motivate a wide spectrum of people." Schmidt says Tuck helped him realize the importance of working effectively in teams to achieve top results. "You have to identify what skills your team has, align them with clear goals, and put them in a position to succeed," he says. "Tuck helped me practice this."

The culture at Google, adds Schmidt, encourages you to try new things—one of the company's internal mantras is "test and iterate"—and to learn from your failures. For his part, Schmidt says he makes mistakes every day, but he considers his tolerance for risk among his greatest assets, something that's been a part of his DNA since his days as an undergraduate at Middlebury College. "I was sort of a classic liberal arts guy," he explains. While many of his classmates went into investment banking and consulting, he had what he refers to as "an allergic reaction" to that path.

"The traditional idea of business was something I had a hard time with," he says. He dabbled in journalism for a spell, then landed a job at Forrester Research, one of the first companies to do market research on the Internet. "I'm not a techie guy," he says, "but I found the company really interesting." It was a period when Web-based products and services were evolving with great speed. "This was right around the time that broadband was evolving and there were lots of Super Bowl ads from startups like Pets.com." At Forrester, he found that you could be young and still rise quickly through the ranks if you excelled in your area. "I loved the meritocracy," he said. "You didn't have to pay artificial dues.”

From there, Schmidt took a job doing sales and product management for a company called iPhrase Technologies, "a blue-chip, venture-backed startup that didn't start up." Schmidt then migrated to iProspect, a startup ad agency that focused on the nascent search-engine marketing industry. As he worked his way up to a management role, he decided he needed an MBA. "I realized there was a lot I didn't know about business," says Schmidt, whose interest in startups didn't wane at Tuck. This led him eventually to Google, a company he admits is something of a black box to outsiders.

To many of its billions of users, Google's most fascinating feature is its search engine. That amazing algorithm, capable of ranking one web page over another with precision, rivals the formula for Coke in terms of popular mystique. But Schmidt is quick to point out that the overwhelming majority of the company's revenue comes from its low-cost and famously unobtrusive advertising. "We are probably the largest advertising company in the world," he says.

Google's success in this area, says Schmidt, comes down to the fact that the old advertising model simply doesn't account for how most people now live their lives. "Twenty years ago, when I was in high school, I'd get up in the morning and read a magazine or wait for the newspaper. Later in the day, I'd watch the 6 o'clock or the 11 o'clock news. Now you can watch CNN. You can go on Facebook or Twitter. You have tools that track where you are, as in, 'Look, Brian just popped into a restaurant.' You used to have to wait to watch Seinfeld, but now there's YouTube. Plus, he notes, Google has become a portal to all kinds of information—all of which fundamentally changes the way businesses and individuals reach customers.

Google has changed dramatically over the course of Schmidt's career. Today, the company employs 20,000 people and receives somewhere in the range of 3 million resumes per year. As a result, the prospect of landing a position there may seem more daunting than ever, but Schmidt says many of the same "simple signals" ring true. And given that he is not the only Tuck graduate in the office, whatever mysterious method Google uses to organize the world, there's evidence to suggest that "Tuck MBA" is the sort of key phrase that generates the right results.