With the Alan Smith D’52 T’53 Visiting Executives Program, Tuck MBAs have the opportunity to engage with business leaders in real life. 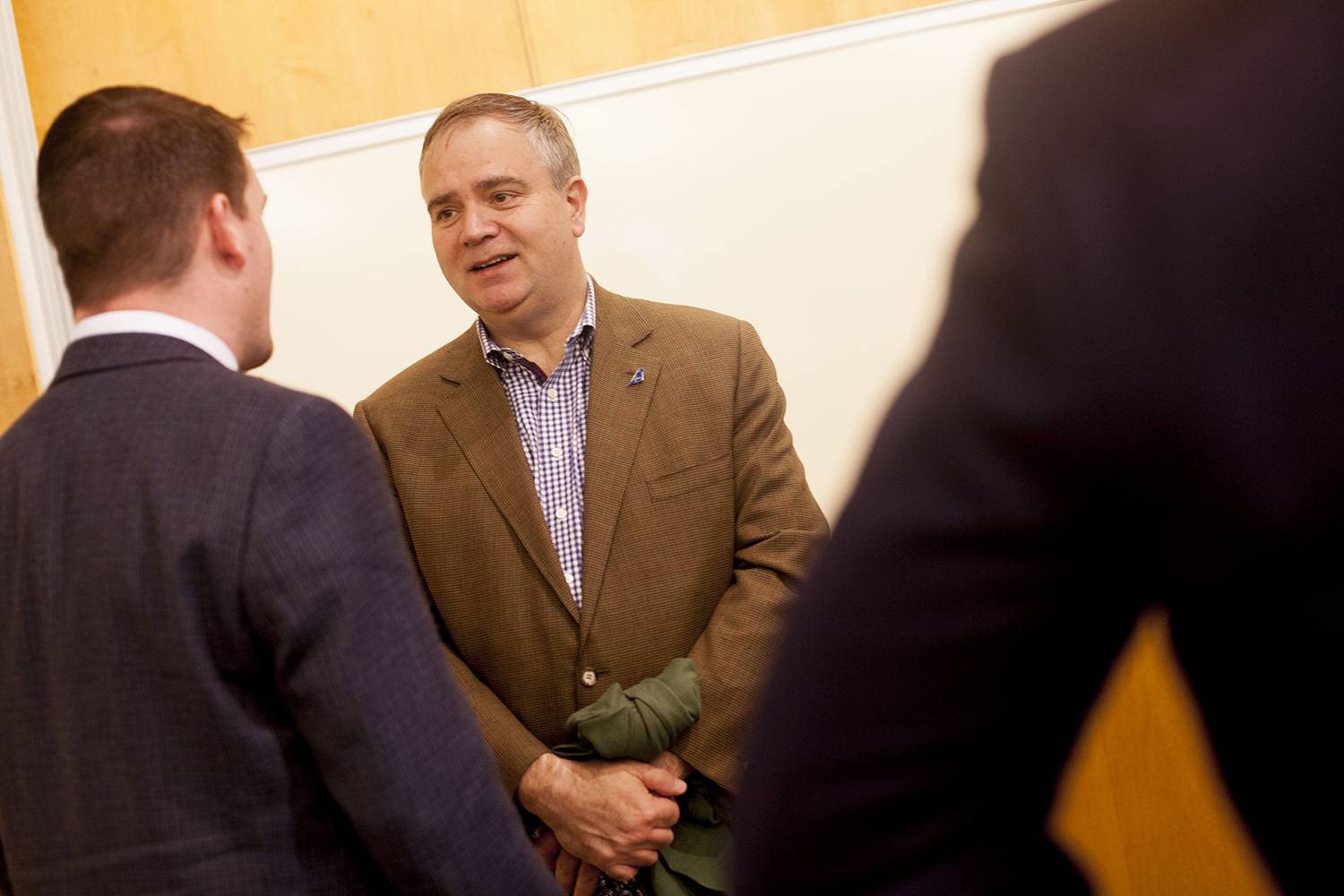 Robin Hayes, president and CEO of JetBlue Airways, visited Tuck in September as part of the VE program.

In 1952, insurance executive Charles Zimmerman D’23, T’24 returned to Tuck to speak to MBA students about leadership and his career journey.

One student in the audience was particularly struck by Zimmerman’s talk: Alan Smith D’52, T’53. “It was the first time I had ever seen a living breathing executive in the flesh,” says Smith. “I remember thinking I could be like him—all of a sudden the chance to be successful in the business world seemed within my grasp.”

And he was right—Smith joined General Motors as a member of its finance department in 1956, and quickly rose through the ranks to vice president of finance, and later as a member of its executive committee. He retired in 1992. During his time at GM, he returned to Tuck several times to lecture just as Zimmerman had. Realizing the importance of sharing his knowledge with tomorrow’s leaders, Smith began funding the visiting executive program at Tuck shortly after his retirement, and in 2002, it was renamed the Alan Smith D'52, T'53 Visiting Executive (VE) program in his honor.

As I reflect back on my time as a student at Tuck, being a visiting executive host was certainly one of the highlights of my second year. For the last several years, I have had the privilege to participate as a visiting executive in the core operations course. I always leave feeling inspired and amazed and looking forward to my next visit.

“My vision was that it could be bigger and better,” he says, “and they could bring in more people who had been out in the world and find out how they approach problems.” From a half-dozen visiting executives in the early 1990s, the program grew to welcome 45 executives in 2001, and 85 in the most recent academic year—half of whom are Tuck alumni. In addition to guest speaking in classes, these business leaders engage with students during meals, round table discussions, fireside chats, and one-on-one office hours. “We want to provide as many opportunities as we can for students to interact with visitors, whether they are in a class or not,” says Cindy Falzarano, head of Tuck’s VE program and a program manager for alumni engagement.

As someone coming from the military without a great understanding of the business world, I leveraged the VE program to expose myself to a variety of different leaders within industries. The richness and depth of conversation we had reinforced the value of diverse opinions both in the workplace but also in daily life. The VEP was the most valuable experience I had at Tuck.

Recent visiting executives include Doug Baker, chairman, president, and CEO of Ecolab; Rick Goings, chairman and president of Tupperware Brands; and Karin Stawarky T’99, managing partner and founder of Spark Leadership Partners LLC. In September, JetBlue Airways President and CEO Robin Hayes spoke to a packed classroom about the company’s response to recent natural disasters, including discount fares to evacuees. “He spoke about how important the human factor is to everything they are doing,” says Falzarano, “that at the end of the day what matters most is not your paycheck, but what you are doing to help people.” 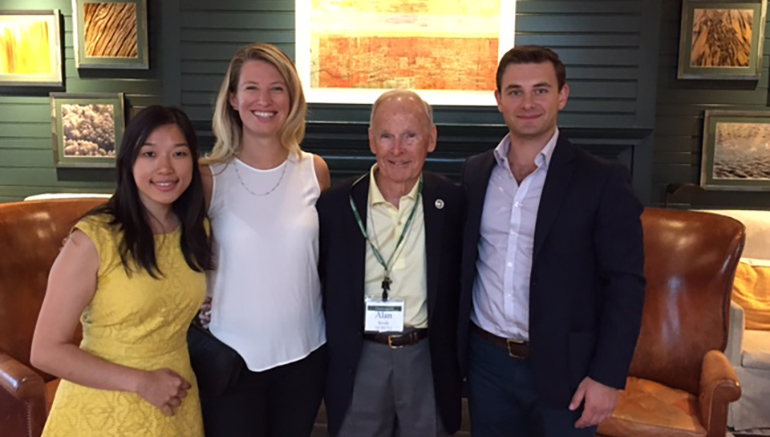 Some students get an even more up-close experience with executives as VE Program host fellows, who coordinate and help market guest speakers by encouraging their peers to participate in the program. The volunteer positions are highly sought after, with 40 Tuck students applying last year for just seven spots. “You get to see another side to them, which is more relaxed,” says current fellow Connie Huang T’18, “and it encourages you to ask the kinds of questions you wouldn’t necessarily feel comfortable asking in a larger group setting.” Huang is focusing on real estate, and has used the program to network and meet both industry leaders and fellow students interested in the field.

Huang and two other T’18 host fellows, Stephanie Berger and Vitalie Djugostran, met Alan Smith this fall, while he and his wife Sharon were in Hanover for his Dartmouth reunion to talk about his experience. “My hope is that they are as excited as I was a long time ago to work their way into a position of decision making,” Smith says, “and that seeing someone who has done what they want to do might be an inspiration.”

The Visiting Executive Program gave me the opportunity to learn from the institutional knowledge of dozens of executives working in fields that spanned the realm of possibility after Tuck.  The events also provided a forum to gain insights from my classmates’ professional and personal experiences, focused on topics that wouldn’t necessarily be broached in any other setting. 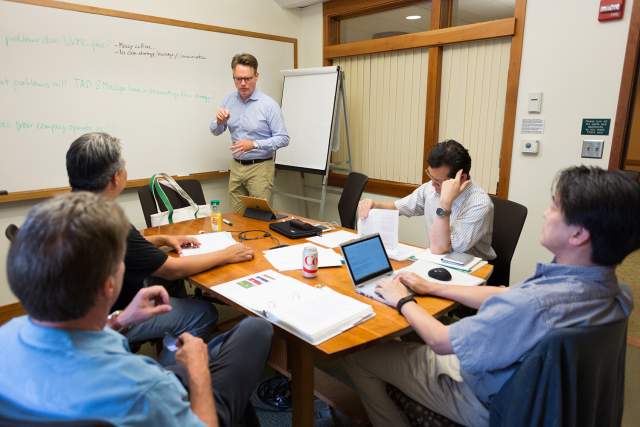 The Tuck Advanced Management Program (AMP) at Dartmouth is a two-week program designed to advance the strategic orientation of senior executives. 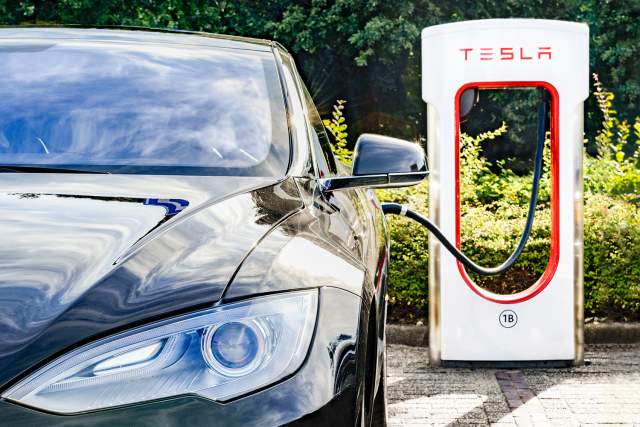 Over a dozen schools will come to Tuck this week to compete in a case competition.