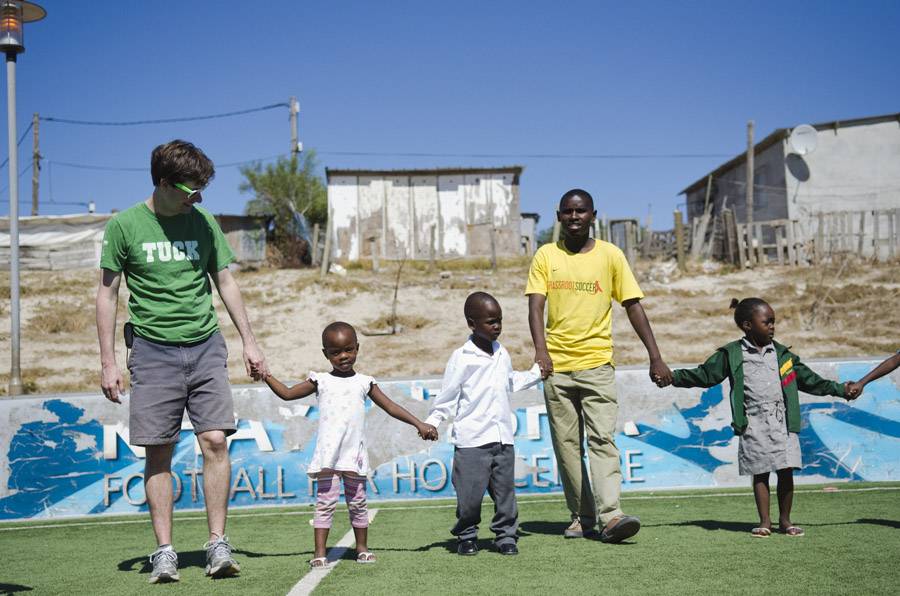 Christel Bouvron T’13 is no stranger to global business. The first-year Tuck student grew up in Singapore, speaks Mandarin, and worked for a consulting firm that helps multinational corporations break into developing markets. Her most recent international experience: a for-credit Learning Expedition to South Africa, where local business leaders gave Bouvron and her classmates an up-close view of their operations.

That included seeing Standard Bank’s efforts to expand in impoverished areas like Soweto and learning about the mining company Anglo American’s attempts to combat the spread of HIV/AIDS by offering free anti-retroviral treatments to workers. “It was very interesting to get the perspectives of many senior executives,” she says. “Africa is really the next big opportunity and having this experience and understanding how things are done in South Africa will definitely be very helpful throughout my career.”

Bouvron’s exposure to global business won’t end with her return to Hanover, however. Like other top MBA programs, Tuck is increasing its international course content and programming, but is doing so in a way that only Tuck can. In addition to Learning Expeditions, students can broaden their global mindset through curricular offerings such as the Tuck Global Consultancy, First-Year Project, Research-to-Practice seminars, and independent studies that emphasize small-group learning with faculty involvement.

Tuck also encourages students to form global education plans and offers counseling to help them understand the options available to them and how they fit with their individual needs and goals. “We’re telling people up front, ‘These are all your options. Now let’s focus on your goals and how to reach them,’” says Penny Paquette T’76, assistant dean for strategic initiatives at Tuck. “We’re trying to help them get the most of what Tuck has to offer.”

Tuck’s approach is predicated on the belief that every student needs a global mindset, even if they plan to work in their home country after graduation. For example, American student Ben Dower T’12 plans on joining the Chertoff Group in Washington, a security and defense consulting group founded by former secretary of homeland security Michael Chertoff. Dower has gone to South Africa on the Learning Expedition, been to Peru for a Tuck Global Consultancy project, worked with Tuck’s Center for International Business as an MBA Fellow, and studied the European debt crisis and the bubble in Spain’s solar market through a mini-course at Madrid’s IE University Business School in 2011.

“The Chertoff Group works with some clients in a number of different countries in Africa, Asia, South America,” he says. “They’ve got plenty of homeland security and defense expertise there. Thanks to my experiences at Tuck, it’s more the intangibles that I can add.”


With global trade increasing at about 6 percent annually for the past two decades, the need for MBA students to grasp the norms of international business is only accelerating. “I fear that some students don’t fully realize the immediacy of globalization when it comes to their careers,” says Lisa Miller, executive director of Tuck’s Center for International Business.

“The integration of the global economy has proceeded at a rapid clip. So we think that no matter what you do, there will be a global dimension to your career.”

Miller, who previously lived in China, Taiwan, Singapore, Tunisia, Vietnam, and France before coming to Tuck in 2006, tries to get students to engage in projects in parts of the world of which they may know little about. “Sometimes their global education plan will be driven by career goals, sometimes it’s more driven by their personal background,” she says. “Many seek to gain experience with countries they haven’t been to before.”

One of the most popular options for Tuck students interested in enhancing their global mindset is the Tuck Global Consultancy, in which teams of second-year students travel overseas to advise an international company; recent clients were based in the Czech Republic, China, and Jordan. Dower and classmate Ose Oteze, who is originally from Nigeria, spent three weeks in Peru last November and December with a team of students consulting for a company that builds modular housing for the country’s booming mining industry. “The company had been growing rapidly and wanted to see if its organizational structure made sense,” says Dower. “It had done a number of acquisitions and had only one back office.”

During the project, Dower also learned that the founders of companies in South America often play a more active role in managing all facets of operations than their counterparts do in the United States. While many of the Tuck team’s recommendations were well received, their advice that the company’s chief executive should delegate some tasks was greeted coolly.

“This person wanted to retain a lot more control and I think that’s fairly typical in South America of individual or family controlled firms,” he said. “We got pushback on this.”

The global consultancy project was an intense in-the-field experience, says Oteze, who also went to China last year on a Learning Expedition. “It was really hardcore, working 12-hour days minimum,” she says. “It definitely added to my understanding of an international business climate and it was something that will help me going forward.”

Fresh off her South Africa Learning Expedition, Bouvron says that Tuck provides more international opportunities than many expect. Along with the travel-abroad programs, there are also numerous on-campus programs and activities with a global theme: conferences, guest speakers, panel discussions, and cultural events. International students also make up about a third of the student body and many American students have lived and worked outside their home country as well. Programs such as Country Chats enable these students to share their experiences with the whole community.

“There are so many ways to develop and nurture a global mindset while in business school,” adds the CIB’s Miller, “and we want to continue to offer programs, especially in emerging markets, that have a lasting impact on our students.”