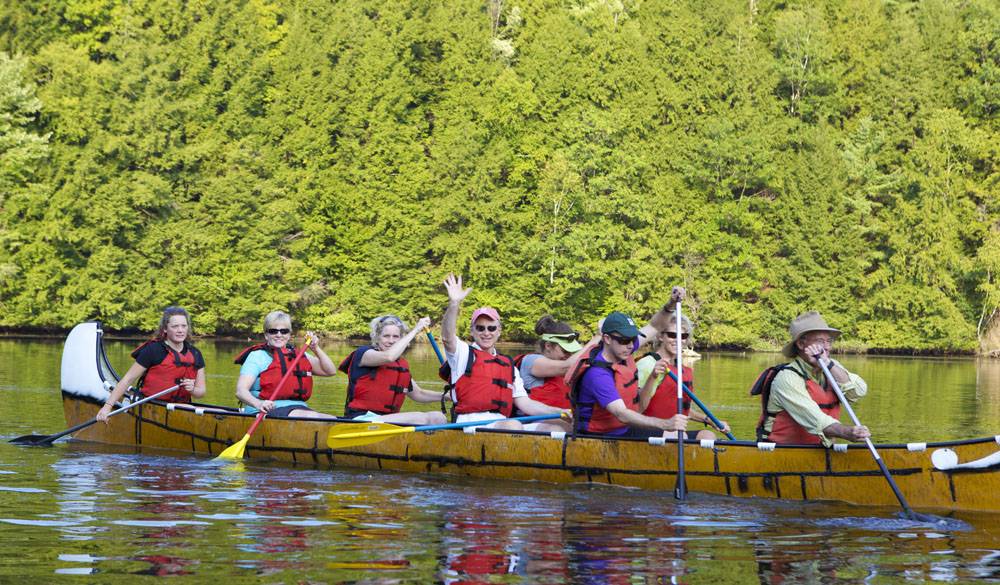 On a Sunday afternoon in mid-August, 18 Tuck and Dartmouth alumni arrived on campus, not quite sure what to expect from the next four days. They were on hand for a test run of Tuck Summer Camp at Dartmouth, and had taken it on faith that faculty director Sydney Finkelstein, the Steven Roth Professor of Management, had created a program worthy of their precious time.

It didn’t take long for them to feel at ease. Within an hour, they had donned hiking boots for a short trek on the Appalachian Trail to the Class of ’66 Lodge, where they had dinner and participated in an improv comedy workshop with Casual Thursday, Dartmouth’s comedy group. By the end of the night, the disparate group of alumni, who shared not much more than a love of learning and of Dartmouth, agreed they were in for a special experience.

Finkelstein, who’s also the associate dean of Tuck Executive Education, got the idea for a program that blends business, liberal arts, and the outdoors when he realized how many alumni considered themselves lifelong learners. “Our alumni have done all kinds of things in their lives, and done pretty well on the job,” he says. “I thought they’d really enjoy being in an environment where they could learn about very timely and important topics by world class teachers, in combination with a lot of hands-on activity in the outdoors. And there’s no better place than Hanover to do this.”

So he created the ideal summer camp experience for adults, with equal parts intellectual discussion, outdoor adventure, and self-discovery. The program included seminars on topics as varied as leadership, hybrid car technology, the Arab Spring, and neuroscience, along with a master class from Hanover Inn executive chef Justin Dain, art and a cappella training at the Hood Museum and the Hopkins Center, and acting lessons from Dartmouth drama professor James Rice. To enjoy the perfect August weather, the group hiked, canoed down the Connecticut River, and roasted s’mores by a campfire, and were guided through the Dartmouth high ropes course.

Karen Blodgett D’86, T’91, the director of wealth management for Aspiriant in San Francisco, returns to the Hanover area every year to visit family. When she received an invitation from Finkelstein to be part of the test-run of the summer camp, she didn’t hesitate to say yes. “It just sounded like a lot of fun,” she recalls. “It was almost hard to resist.” Right away, she appreciated the hybrid nature of the program—that it’s not simply a lecture or another reunion. “The opportunity to get to know a wide range of people from different classes in different fields was special,” she says. “We weren’t alike in our professions, but we shared enough of a common bond that it was easy to come together as a group.”

Blodgett enjoyed the chance to spend time on campus, a rare thing for most alumni, but for her the highlight was performing a scene from Shakespeare’s Henry V in the Bema, Dartmouth’s natural amphitheater. The scene was from the Battle of Agincourt, where Henry V was outnumbered by the French and had to rally his troops to victory. It was a key leadership moment for the king. The group practiced together and was coached by Rice on voice and carriage, then made a final performance where each person recited a different part of the scene. “The passage itself had been selected for a very good reason,” Blodgett says. “And it’s a perfect example of how much thought was put into everything we were doing.”

For Finkelstein, running alumni through sessions on art, music, and drama—getting them out of their comfort zones—was all part of the camp theme of self-awareness, an important topic for leaders seeking insight on what their real impact could be. “One of the things we got from [Dartmouth professor] Christian Jernstedt’s lecture on neuroscience is that we can learn almost anything if we’re willing to,” Finkelstein says. They also learned that they could let go of their mundane worries and be like kids at summer camp again.

Tuck Summer Camp—or a similar program with a different name—will likely be offered during the first week of August in 2014. For more information, contact Clark Callahan, executive director of Tuck Executive Education at 603-646-6470.