John Taft’s great-grandfather, William Howard Taft, was U.S. president and chief justice of the U.S. Supreme Court. Both his grandfather and uncle were U.S. senators and his father was a physics professor and dean at Yale University. Given that pedigree and his position as head of RBC Wealth Management, the seventh-largest retail brokerage in the United States, one might think he’d be more or less happy with the status quo. 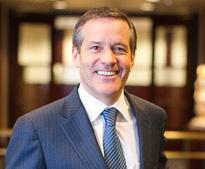 Not so. As Taft told a group of Tuck MBA students April 2 during the Ariel Halpern Lecture on Ethics and Social Responsibility, five years after the financial crisis Wall Street’s fundamental ethical failings have not been corrected. “The culture of the financial services industry is broken and we have yet to find our way back,” said Taft, in a freewheeling lecture co-sponsored by the Center for Business and Society and Tuck NewsHour. “In the 1990s and 2000s we started to think of ourselves as an end to ourselves [rather than] as intermediaries for our clients.”

In Taft’s view, what has disappeared from the financial services industry is an ethos of stewardship. Banks and financial companies should serve as an aid to the economy, helping efficiently allocate capital from investors to companies and governments that need it, said Taft. A properly functioning financial industry helps spur sustainable long-term growth and benefits investors, companies, and society in general.

Taft was unsparing in his criticism of those whose behavior helped worsen the panic, singling out the father and son team that ran the Reserve Primary Fund, a supposedly low risk money market fund that saw the value of its shares “break the buck” after it invested heavily in debt issued by Lehman Brothers on the eve of the bank’s 2008 collapse and suspended investor redemptions. Taft’s RBC Wealth Management was among the investment firms that had put clients’ money in the $62 billion fund. He writes of the experience in a new book “Stewardship: Lessons Learned from a Lost Culture of Wall Street.” In it, he writes of his dismay at the Reserve Primary Fund’s decision to halt redemptions.

Clients “had no way to settle pending securities purchases and therefore no way to trade their portfolios at a time of historic market volatility. No way to make minimum required distributions from retirement plans. No way to pay property taxes. No way to pay college tuition. It meant bounced checks and, for retirees, interruption of the cash flow distributions they were counting on to pay their day-to-day living expenses,” Taft wrote.

RBC chose to make good on client losses up to $.03 per $1 share, and the broader panic was eventually eased after the Treasury Department and the Federal Reserve agreed to backstop money market funds. Yet the willingness of the Reserve Primary Fund to abandon its clients still disturbs Taft, and is emblematic of the Wall Street culture he decries.

There are other ways to act, says Taft. He writes in his book, “The paths are marked and defined by our willingness to embrace and act on our stewardship responsibilities, to make our lives about serving others, and to embrace as our mission, leaving the world a better place than we found it. “

Stewardship, an important value articulated by Taft, is a critical part of the education of Tuck MBA students. The annual Halpern lecture brings a high-profile speaker to the school to discuss with students the significance of principled behavior. Supplementing this lecture are other visiting executives, discussion sessions, and required ethics and social responsibility courses that prepare Tuck students to become responsible business leaders who are forever conscious of the impact their decisions have on their customers, communities, and broader society.