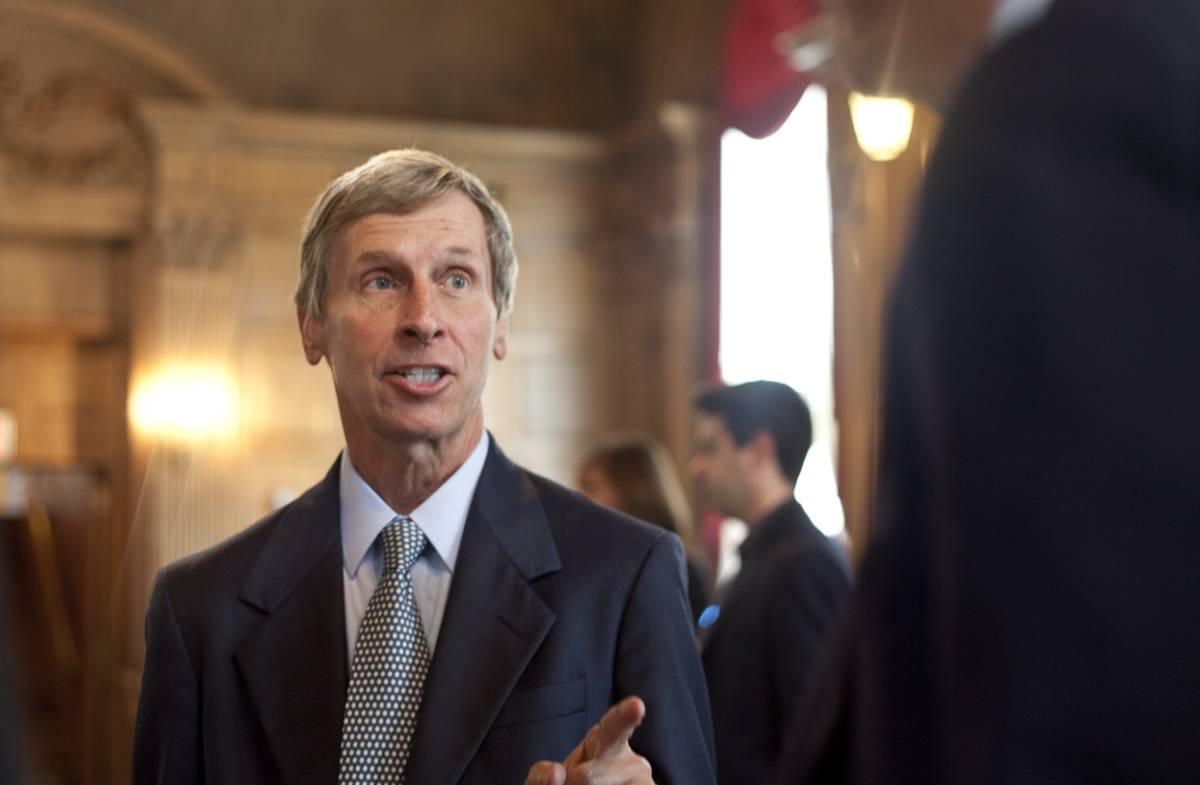 In his elective, “The CEO Experience,” Tuck senior fellow and former New Hampshire governor John Lynch takes students inside the mind of the CEO.

John Lynch wields his pen like a conductor. It dips and weaves as he shepherds students through each case study in his second-year elective, “The CEO Experience.” It punctuates surprise twists and reversals with a flourish. When Lynch gets really excited, he’s been known to fling it in the air, mortarboard-style.

“His energy is so infectious and you get so wrapped up in the journey that every time he guides you to an epiphany, you’re like, ‘Of course,’” says Brendan Faherty T’14 of the former four-term New Hampshire governor. “It’s the kind of class where, after you leave, you keep the discussion going out in the hallway.”

It’s easy to see why students are so engaged: Who hasn’t wondered what it’s really like to be a CEO? Entrusted with the power to make transformative change, yet answerable to the market and countless stakeholders, CEOs have much to teach us, according to Lynch.

“I want my students to come away better understanding how and why a CEO has to see things differently,” he says. “Whether or not they end up running companies themselves, they’ll be stronger leaders because of this knowledge.”

A senior lecturer and senior fellow at Tuck’s Center for Global Business and Government, Lynch created “The CEO Experience” in 2013, structuring it around case studies and class discussions. On this day, the first case illustrates the central message of the course: What seems like a straightforward leadership challenge with an obvious solution proves much more complex when viewed from the C-suite.

The case concerns a product everyone’s familiar with: bubble wrap. Sealed Air had made millions from its high-quality Saran-coated bubble wrap and their company culture was built on the ideals of quality and innovation. When competitors began producing a lower-quality uncoated bubble wrap, Sealed Air’s CEO faced a dilemma: produce a “me too” uncoated bubble wrap that would cannibalize their original product or stay the course.

“The inclination is to say, ‘Don’t do it; we have a successful strategy in place,’ especially since Sealed Air had lots of engineering studies which demonstrated that the coated bubble was of higher quality,” Lynch says. “Eventually, though, they produced the uncoated bubble because the CEO realized that you can’t define quality in the lab—you have to define it in terms of the customer.”

For many students, Lynch says, this comes as a surprise. After all, defining “quality” by the complexities and contradictions of real-world customers is quite different than defining it in an economics course vacuum. To drive the point home, he then translates this lesson from the private to the public sector.

“Everybody wants quality in terms of education, but when online education was first introduced, many institutions rejected the idea as inferior product,” he says. “Today, everybody’s on board because it meets the needs of students who want to learn that way. This issue of constantly defining and delivering quality is so important for every leader.”

According to Lynch, CEOs who grasp this do better, as evidenced by the class’s comparison of New York mayor Rudy Giuliani’s skillful handling of 9/11 versus former Federal Emergency Management Agency head Michael Brown’s response to Hurricane Katrina.

“There are so many lessons from the managing of crises in the public sector that can be applied to the private and vice versa,” says Lynch, whose background in both sectors—Lynch also served as CEO of furniture manufacturer Knoll Inc.—makes him uniquely qualified to teach this course. “From these two cases, for example, it’s clear that a successful CEO must be accessible, express empathy, know the facts, make decisions, and build trust among the team.”

This term alone, Lynch has brought in experts ranging from Keurig co-founder Peter Dragone and Harvey Golub, the former CEO of American Express, to Evan Bayh, the two-term Indiana governor and two-term senator, who praised Lynch’s hands-on approach to the subject.

“One of the things I admire so much about John is that he is a chief executive who has always kept his feet firmly planted on the ground,” Bayh says. “In public life or in the classroom, he’s a pragmatist who retains a sense of humility, which, unfortunately, can be all too rare.”

In addition to finding their own leadership balance, Lynch hopes that by the end of the course, students come away savvier about what’s really going on in a CEO’s mind. His goal is for students to more fully understand how the same qualities and complex decision-making that make a CEO successful can be applied to their own careers.

“It was fascinating getting to think of leadership in a completely new way,” says Faherty. “This class was the perfect capstone to all the fundamentals Tuck teaches and I’ll never forget it.”