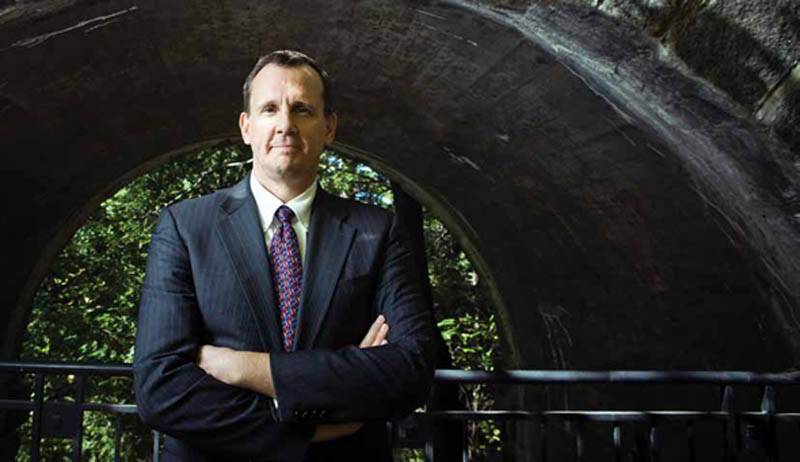 Peter Golder is an expert in global marketing, and innovation strategy. He's also something of a modern-day Sinophile, having led learning expeditions in China for Tuck MBA students and helping to guide the China module in Global Leadership 2030, Tuck Executive Education's flagship consortium program.

In GL2030, Golder works with company teams in the program's final, weeklong module in China, where executive participants learn firsthand the business advantages of embracing cultural differences and developing a global perspective. But China isn't just a professional interest of Golder's: it's also where he and his wife, Melanie, adopted two of their daughters.

When did you first become interested in global business and China specifically?
In the 1970s—as a kid in 1973 and '74, sitting in a line to get gasoline made an big impression on me. That was a decade that was really driven by the oil economy, and oil's impact on the world economy and world politics was fascinating. China is something of a personal and professional story for me. In the early 1990s, I was interviewing CEOs for a project I was doing, and basically they all said, We have to be in China. The personal side of the story is that two of my children are from China. My first trip there was in 1999, when I went there to adopt them. And in 1999, China was still a different world; like other Asian cultures, its history is measured in thousands of years instead of hundreds—from that perspective alone, it's fascinating. Since 1999, its history just keeps getting more and more interesting.

Can you talk a bit about your work in China as part of Tuck Executive Education's Global Leadership 2030 program?
I've participated in Shanghai, working with executives from Colgate-Palmolive, Corning, Deere & Company, and Rolls-Royce. Like so many others, these are companies that are facing very real challenges in China—it's not theoretical for them. They all have projects that they've been developing throughout the year, and the three-module program gives them the ability to do some of that work in Hanover first, to lay the groundwork and build up a context before going overseas. When they're in India and China for the next two modules, that's the time for them to work together and push their projects forward in-country, where they can be feeling and experiencing the culture—it makes the experience much richer. GL2030 participants come from the U.S. and other countries, but China is a forum for them to think about what they're going to do elsewhere. One of the things I talk about with them is how they would adapt their strategy for China and how that's then adaptable to other economies—what works in China is not going to work everywhere, and what works elsewhere is not necessarily going to work in China.

You've previously called China a "laboratory" for global business. Why is that?
In many ways, China is a microcosm of the world: it's changing so quickly, but it's not all changing at the same rate. There's so much heterogeneity within it alone. Parts of China are first-world economies—Shanghai, Beijing, and Hong Kong. But China has a secondworld economy as well. It's technically still a Communist country, with a central government and an authoritarian type of rule, which also translates into how business is conducted there, with some state-owned or state-favored enterprises and state-owned technology. And you certainly have the third-world influence, people not living so terribly different now than they have for hundreds of years. They might have cell phones and some electricity, but no running water. And below this thirdworld economy, there is very real poverty. It is somewhat limited in China, but it's still there.

Is there anything from the GL2030 program that you bring back into the MBA classroom?
The best thing I bring back is the currency and relevance of the business issues from GL2030. For example, I was already doing a case on Colgate in my Global Marketing course, so I could talk about that with the GL2030 Colgate participants. And they have good insights about the context not just of that particular case but about what's going on in China as well. Being able to bring that back into the classroom is very valuable for the students. The two experiences really go both ways—GL2030 becomes a laboratory for me to talk about in the classroom, and GL2030 becomes a lab for me to refine ideas that I might be sharing in the classroom.

You've also led learning expeditions to China for Tuck students. What is the difference between those trips and GL2030?
Business students feel like they almost have to go to China. On a macro level, the U.S. and China will be the two preeminent economic powers, certainly during my lifetime and probably during my kids' lifetimes, so learning more about China is certainly beneficial for business. GL2030 participants are more focused on their work; it's a more specific kind of learning. I think that's the general difference between the executive-education experience and the MBA experience: executive education is focused on something specific. That's why executives come to Tuck, to work with us to help push forward their thinking on a particular issue, whereas the MBA is a professional degree designed to give people a mindset and frameworks that will last for decades. But you can build in a little liberal-arts thinking into both the learning expeditions and GL2030. The culture is part of your learning, and you don't diagnose culture with a quantitative model—you don't quantify somebody's cultural intelligence. It's a mindset. People become more intelligent on these trips by recognizing their ignorance— what you don't know is what can make you intelligent. And humility about what you don't know can keep you from getting into trouble.

It may seem obvious, but how does learning about a culture teach you how to market to or within that culture?
In China, as in some other countries and more than in Western economies, it's about building relationships with the country. You start to build that familiarity by going to a place repeatedly; you establish a relationship with the country and then with the people in that country. And Chinese businesspeople, more than U.S. businesspeople, want to do business with people they already have a relationship with. The number 1 mistake in global business is standardizing what you're doing instead of adapting to a country. So the more familiar you can become with more countries, the more sensitive you are to the idea that things are different. So the default becomes, Change everything. Then you purposely decide what you can keep the same. Even though people in different countries might seem the same, in terms of their clothes, movies, or books, there are still some big differences. Culture doesn't go away; when the trappings of culture disappear, the ingrained culture is still there.