The Home of Tomorrow, Today 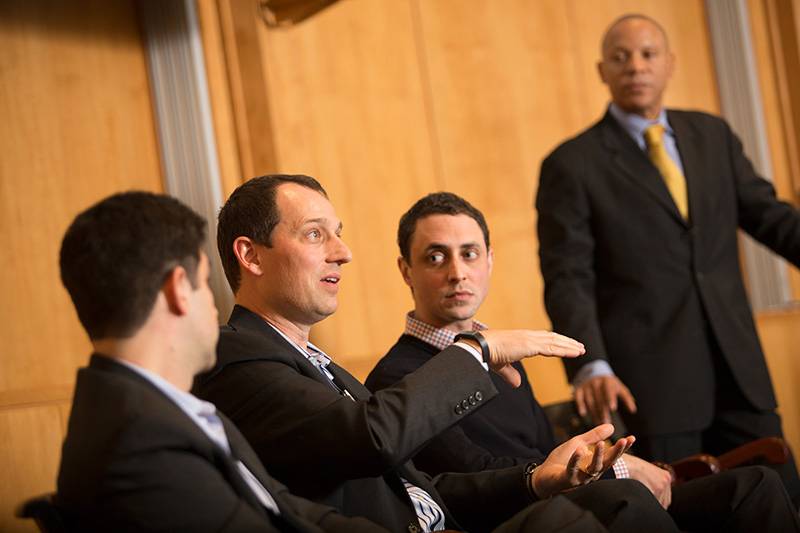 Tech@Tuck panel discussion focuses on the promise and possibility of the connected home.

Parents have long found comfort in the use of surveillance tools to protect their children, like baby monitors and nanny cams. As helpful as they can be, however, they still render parents passive observers. What if, through the use of smart technology, they could empower themselves by empowering their home? Imagine a scenario where a parent at work can, with a few swipes of a smartphone, admit a locked-out child into the house, receive an alert if the babysitter opens the liquor cabinet, or identify—and speak to—the stranger knocking on the front door.

The potential of a truly connected home is endless, the panelists agreed, describing how users can track and control everything remotely, from Wi-Fi thermostats to home security systems. Rather than distancing families, as some worry our increased dependence on e-solutions will do, Chmielewski outlined ways in which connected homes can instead strengthen them, such as allowing traveling parents to video chat over breakfast with their children or to monitor bedtime and TV usage. Even something as prosaic as knowing what time a door opens or closes has the potential to change lives, as rebellious teenagers of the future may find out, he laughed.

After listing a series of evolving safeguards to protect against privacy or grid security compromises, the panel discussed the challenges of effectively marketing connected homes to an intrigued but wary populous. “It’s like how TiVo or DVRs were in the beginning—everyone who has it, loves it, but it’s challenging to explain to someone who doesn’t yet,” Mayer said. One of the more appealing aspects, Chmielewski added, was the concept that all the connected home’s controls could be activated not just by a smartphone, but also by small electronic wearable devices such as the Pebble Smartwatch. “Before I had it, I thought, ‘that’s silly: why not just use a phone?’ But now that I do, I see how much cooler it is. I’m playing with the 1.0 version and I can only imagine what the 3.0 version is going to do,” he said.

Even more powerful than the convenience offered by connected homes, according to Frader-Thompson, are our very human reactions to utilizing them. He described an EnergyHub app called Radius, which automatically activates a home’s energy-saving mode when the user physically leaves. “When we first rolled it out, I thought the fact that it gives you a notification on your phone would be annoying, but it actually turns out to be really reassuring to people,” he said. “Giving people the awareness and the warm and fuzzy feeling that they are doing the right thing without them actually having to do anything is powerful.”

Perhaps the biggest opportunity for the connected home to capture the general public’s imagination as a powerful tool rather than a luxury, the panelists said, is how it can aid with health care and eldercare. This technology can enable older adults who don’t wish to enter assisted living remain in their homes longer. It can also empower caregivers and loved ones to respond more quickly and efficiently in a crisis. “In his 90s, my grandfather went out every day at 9 a.m. to get the newspaper. With this technology, you can see, ‘Hey, the door didn’t open today, maybe Grandpa fell,’” Chmielewski said. “Or if a scale in her home shows that Grandma gained three pounds in a day, that could mean she’s retaining water, which may be a sign she is about to have a heart attack.”

According to the panelists, any doubters as to the arena’s feasibility need only look to Google’s recent $3.2 billion acquisition of the smart-home startup Nest. “This proves what we’ve all known for a long time, that this is a real space, not just for early adopters and techies. This is something that the mass consumer wants and it provides tremendous value,” said Mayer. Instead of ceding the market solely to Nest, however, Frader-Thompson reminded attendees that the market is huge and fragmented, and that Nest’s highly visible success acts as a “rising tide lifting all boats.”

After all, they agreed, when it comes to technology, what seems exotic one season soon becomes the established norm the next, and windows for entrepreneurial opportunity can close accordingly. The takeaway, they agreed, was that almost everything we encounter in our homes and world may soon contain smart technology and, in the near future, this phenomenon—“the Internet of things”—will seem less like a futuristic dream out of the 1960s cartoon “The Jetsons” and more like everyday life. “Right now I’m looking at all the technology in this room and how we take for granted how it all comes together,” Frader-Thompson said. “I imagine that the connected home will emerge in a similar way.”