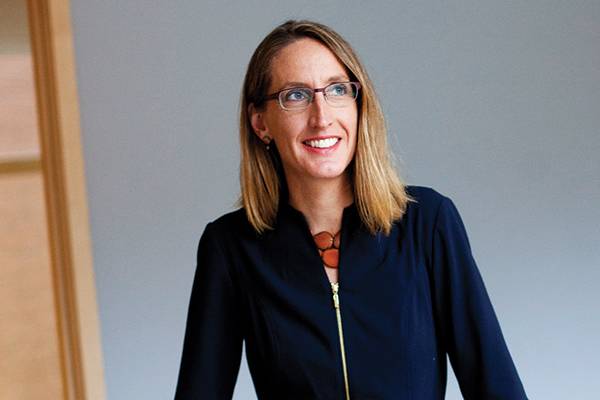 When Leslie Robinson was in high school, her mother warned her that she would have to earn her own money if she wanted to continue to live in the manner she’d been accustomed to growing up. Her mother first put Robinson and her two siblings through college. But Robinson took heed from Mom—a financially independent “fighter”—and, after first working as a CPA, she earned her Ph.D. and is now associate professor of business administration at Tuck. Since arriving at Tuck in 2006, she has continued to serve as a special sworn employee for the Bureau of Economic Analysis; testified before the U.S. Senate; and this year, with her two co-authors, Robinson was awarded the American Tax Association’s award for the article that made the most significant contribution to tax literature in the past three years. Along with her scholarly accomplishments, Robinson has also recently made her mark in a new pursuit: competitive masters cycling. Robinson credits her husband and family for their support through the years—and her mother for her drive.

What made you go from accounting into academia?
I liked what I was doing in accounting, but it wasn’t really rewarding to me. My husband was the one who said, Well, why don’t you go teach? I like thinking about why we do things certain ways, how we can do them better, how people’s behavior might change as a result. And I love thinking about policy issues. Teaching is a really good match.

What courses are you teaching now?
I’ve taught the core Financial Measurement, Analysis, and Reporting course since I came to Tuck, and I started teaching the Taxes and Business Strategy elective two years ago, when I was tenured. I’ve been wanting to do that elective ever since I got here—it’s offered in a lot of other MBA programs and it’s related to my research. So it’s very synergistic. I also teach in the Business Bridge Program, which is a wonderful program.

How do you think students respond to your courses?
I think especially with the elective, people think, Oh, taxes—how boring. But then they realize that taxes play a huge role in understanding how to operate a company, how mergers and acquisitions are structured, how to set a company up, and even in compensation packages. And framing is everything. This year I wanted to teach about inversions, and the only case I could find on them was a Harvard Business School case from 1997 or so. And I thought, I can’t use this case—new rules have been passed since then, transactions are different today. So I wrote my own. That takes a long time, but it was great. I wrote about the proposed merger between Pfizer and Allergan, which almost went through. And because the companies broke off the deal after the U.S. government introduced a new piece of legislation that would have affected the tax benefits the companies were hoping to achieve, I’ll be able to have an addendum to the case next year and can say look, here’s this case, the deal actually didn’t close, and here’s why. You can’t have every case be like that in the classroom because it’s so costly, but to have a few of those in an elective or even in a core course is appreciated so much. When you use real-world, timely, relevant examples of what you’re teaching, students can engage and relate.

Your current research includes tax and accounting policy, especially issues associated with multinational operations. Could you talk about some specifics?
I’m working on a lot of different projects. The older projects have to do with tax planning and the things international firms have to do to reduce their tax liabilities. The newest thing, which I’m really excited about, is about a new law that was passed in Australia, one that was pretty unprecedented.

The government decided that they were going to publicly disclose certain data points on corporate tax returns, thinking that there were a lot of subsidiaries of foreign multinationals that were reducing their tax obligations in Australia and that making some of those data more transparent might reduce that behavior.

We looked at how the firm’s behavior changed after they passed the rule, because firms were subject to the disclosure if their income was above a certain threshold, and found that firms did manage their earnings to go just below the threshold in the year before the law went into effect—there’s a lot of bunching just below the threshold. We also found a decline in consumer sentiment but no evidence that investors changed their behavior. Consumers and investors seemed to respond slightly differently. It was a particularly interesting setting because the legislation was a very discrete event.

What does it mean to be a special sworn employee of the Bureau of Economic Analysis?
The BEA is a part of the U.S. Commerce Department that does international surveys for outward and inward investment and publishes foreign direct investment statistics for the U.S. Through a competitive application process, they allow access to survey data to a select group of researchers—I think there are about 25 people in the country. I came to Tuck in 2006 and was first given access to those data in 2007. It’s basically data on multinational firms, and instead of just seeing the whole firm’s operations, like you do in financial statements, you see the operations in the individual countries—you don’t normally see that detail. And there are a lot of questions you can answer in many different fields if you can see their operations in individual places.

Tell me about your newfound passion for cycling.
I love the outdoors and I used to run, but I started having some knee and hip issues. So I picked up a bike. Biking’s been a great outlet for me because I have a lot of energy, and the roads around here are beautiful. And then I started doing hill-climb races—I think all those years of running is why I can do them! I’m really enjoying it, and I’ve made so many new friends—the biking community around here is wonderful.