Entrepreneur Steve Hooper T’11 and two classmates are spending their post-graduation summer cycling across the country.

On Day One of his ride across North America, Steve Hooper T’11 went 21 miles off course, faced an early test in the mountains, and saw a long day grow even longer when he realized the ferry that was to take him and his cycling companions across Lake Champlain wasn’t running.

It was a rough start, and reason enough for many to consider packing it in. Hooper, however, delights in the road less traveled. There’s the ride, of course—a 39-day human-powered adventure that will see Hooper and his West Coast-bound classmates Jessi England and John Gronberg travel some 3,600 miles from Tuck Circle to Seattle. 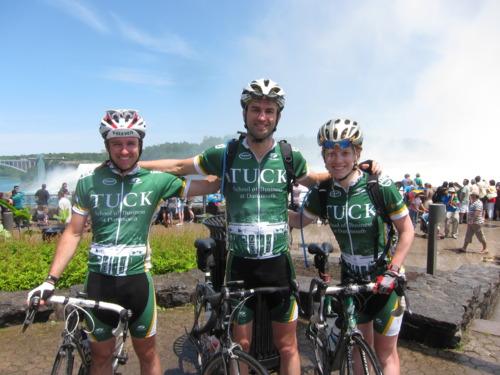 But once there, Hooper plans to continue on his non-traditional path. A former investment banker, Hooper is one of only a small number of Tuck MBAs each year who embark on an entrepreneurial route directly after graduation rather than later in their careers. His project: Kigo Kitchen, a “fast-casual” style restaurant chain specializing in make-your-own, Asian-inspired cuisine.

The startup received an encouraging boost earlier this year with Hooper and his team of second-year students receiving the Arnold F. Adams Jr. Award for Excellence in Entrepreneurship. The award, whose recipients are selected by a committee of faculty from the area of entrepreneurship, is given annually to those whose project “demonstrates outstanding potential for beginning a significant new enterprise.”

The venture is currently in its first round of financing, and if all goes well, the first Kigo Kitchen location in Seattle will open by year’s end. Hooper plans on opening a second restaurant in the greater Seattle area in 2012, with an eye toward expanding beyond the city in 2013.

His very first order of business, though, is to get there. To do so, Hooper and his fellow cyclists are attempting to ride an average of 98 miles per day. They’ve dubbed their adventure “BATUS 2011” (Biking Across the United States) and have set up a blog for people to track their progress—every errant mile and crushing climb, as well as the everyday victories.

By Day Nine, the group was in Michigan, where they were lashed by rain and buffeted by 20 mile-per-hour headwinds. Getting through it meant working together as a team. “Days like today prove what all Tuckies know,” that evening’s blog post read. “Teamwork is the key to life.”