Catching up with the triathlete, father of two, and president and founder of nuun, makers of a successful sports hydration drink.

Tim Moxey is racing to the Seattle airport in his convertible Smart car, with luggage and supplies poking out the top, bemoaning the two parking tickets he collected the day before during his whirlwind tour around town. He had one hour and five minutes to make his international flight.

This state of affairs is hardly unusual for T'01 Moxey, triathlete, father of two, and president and founder of nuun, makers of a successful sports hydration drink now sold in more than 2,000 retail shops in nine countries. 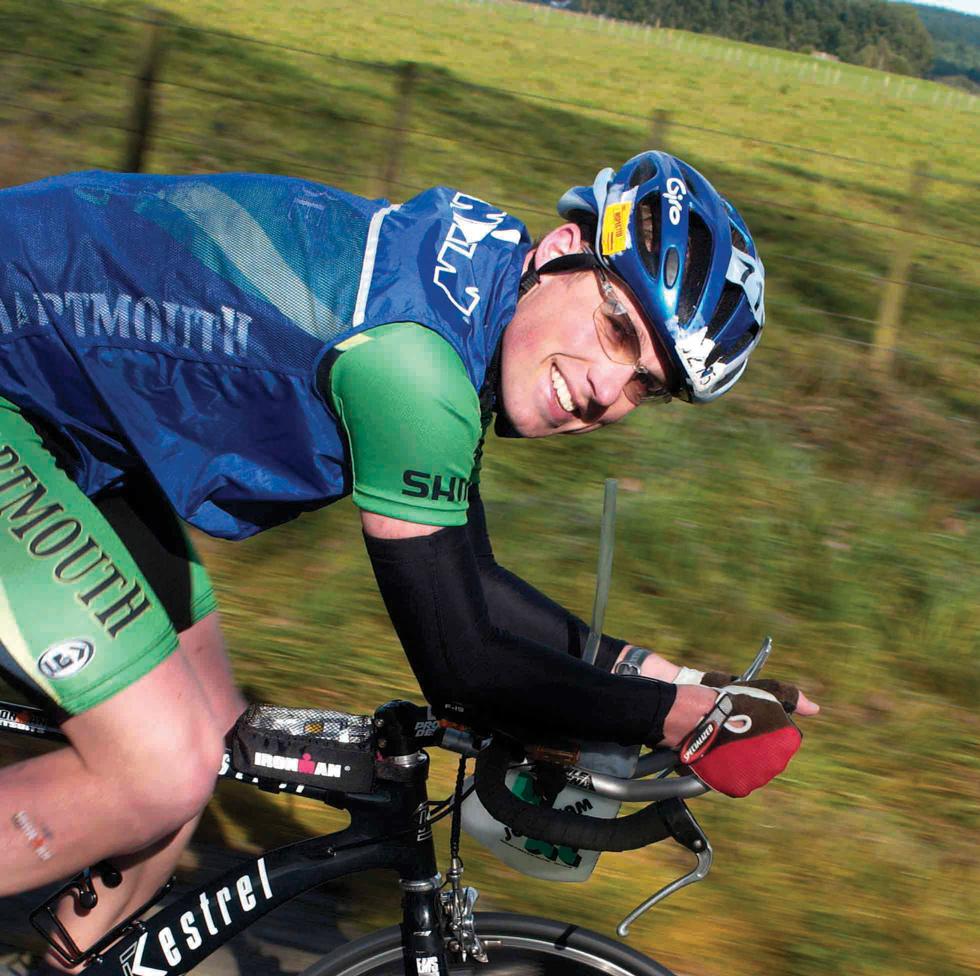 "It's not that I'm always that busy—I'm just pretty disorganized," explains Moxey, 35, in characteristic self-deprecation. The truth is that since graduating from Tuck, Moxey has been very busy, gathering consulting experience at Bain & Company, leading the wetsuit-and-swimwear company blueseventy to the top of the market, and launching nuun.

The sports drink was, in fact, born at Tuck. During 100-mile bike rides through the New England countryside with Professor Ken French, Moxey would gulp all of his hydration drink only to find that the local country store would have no palatable options for sale. As part of his entrepreneurship course, he developed a formulation not unlike those of existing sports drinks, but one that tastes better, contains less sugar, and is much easier to transport: it comes in the form of quarter-size disks that dissolve in water.

"From an electrolyte standpoint, the formulation of nuun is close to Gatorade and POWERade," says Moxey. "In tests with users, nuun has outperformed all the sports drinks in terms of effectiveness, partly because it's just easier to drink." It has a light, slightly tart flavor and can be mixed in any old water bottle—a fact that appeals to the increasingly waste conscious consumer, notes Moxey. The tablets are packaged in a tube the size of a candy bar, so they can be easily stashed in a gym bag. And they come in five flavors: lemon-lime, citrus fruit, tri-berry, orange-ginger, and kona cola, which contains as much caffeine as a cup of tea.

Since founding nuun in 2004, Moxey and his business partner, Laura Hughes, who came on board in 2006 after they worked together at Bain, have built a base of core users: athletes with street cred, such as ultramarathoners, triathletes, expedition kayakers, and mountaineers. Now Moxey and Hughes are working on expanding nuun's appeal to those looking for low-calorie "healthy water." In April 2008, they introduced U, a nuun-like product aimed at yoga enthusiasts and those leading active, if not aggressively athletic, lifestyles. The next project: introducing nuun to spin instructors and Life Time Fitness gyms. But first, Tim Moxey must make his flight. The flight attendant is kicking him off his phone as he finishes the conversation.