Eric Johnson and a dozen MBA students pick the best tech toys of the season.

Eric Johnson and a dozen MBA students pick the best tech toys of the season.

M. Eric Johnson, the Benjamin Ames Kimball Professor of the Science of Administration and director of the Glassmeyer/McNamee Center for Digital Strategies, is trying hard to come up with a serious justification for his annual list of top tech toys. The project, which Johnson runs every year with a dozen MBA students, is so entertaining that the business school lessons tend to take a back seat.

While he’s thinking, a rubbery purple robotic alien comes to life and blares, “You are awesome!” That’s Fijit, a Mattel toy that received some of the highest ratings in this year’s test. It speaks in an Auto-Tune staccato and responds to certain spoken commands. Tell it to dance, and it will gladly oblige.

Somehow, instead of distracting him, Fijit allows Johnson to gather his thoughts. “I see toys as the fruit flies of business,” he says. “They use fruit flies in scientific experiments because they multiply so quickly. Toys are kind of that way.”

Case in point: 80 percent of toys released for the holiday shopping season are new products. They try desperately to ride fads, create buzz, and inject more technology in smaller packages for lower prices. But the reality is, most toys are failures. And it is this clockwork-like process of striving that makes toys such good teaching tools. “In a very short period of time—a few weeks over the fall—you can see product launch, roll-out, marketing, customer reaction, and what happens in January when it’s all liquidated,” Johnson explains. “From a student’s perspective, it’s hard to beat that.” 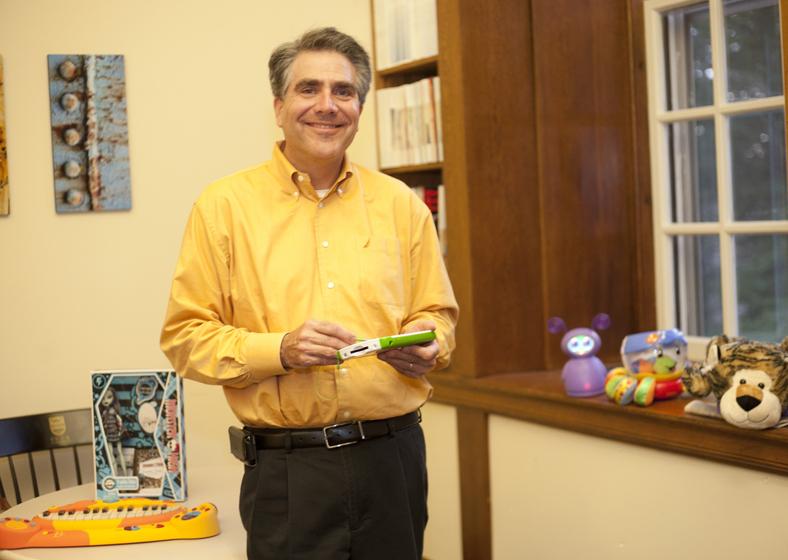 Along with Fijit, some of the 13 toys that made the 2011 list include a Hot Wheels car with a built-in video camera, Barbie Hairtastic printable hair extensions, a Super Soaker that shoots swirls of water, and a kid-friendly tablet device called the LeapPad. The students chose these toys after playing with all the candidates, comparing prices with similar toys, and recording their observations in a Google Docs spreadsheet. The big trend this year is video, since the technology has finally intersected with the sub-$100 price point of the products. So the students considered how video and other forms of technology were integrated in the toys and whether or not those features added “play value” or were merely novelties.

Johnson is especially fond of the LeapPad, which is robust enough for kid play, yet has a video camera and educational games. “That’s no small design challenge,” Johnson says, “to put this technology in a $99 toy. In many ways, it’s a harder design challenge than what Apple and others face, because it’s got to be tough, durable, and simple to use.”

The design challenges extend to packaging too, because many toy purchases are impulse decisions made as children walk the retail aisles with their parents. Sometimes, in fact, toy companies spend more money on designing the packaging—ensuring that it’s eye catching, tempting, and at least partially exposed to kids’ fingers—than they do on developing the products themselves. It’s this aspect of the industry that Colin Carrihill T’12, a member of the toy testing team who also interned last summer in Amazon’s toy division, finds most interesting. “It’s always fascinating to me when the decision maker—the buyer—is divorced from the actual end user,” he says. “You’ve got to get that parent to pull out their wallet and actually spend money on this thing, so there is some brand loyalty that goes into it. And then you’ve got to design a toy that’s genuinely cool. Because if the child doesn’t want to play with it, you’ve eroded some brand value.”

But there are plenty of other reasons why toys are interesting to an MBA audience. For example, toys are especially attractive to entrepreneurs because of their short cycle and potential for large returns. Without much investment, an entrepreneur with the right toy can show up at the annual Toy Fair in New York City, take orders from retailers, and see the product become a $100 million business.

Toys, too, are leading indicators of trends in other businesses. Toys “R” Us ushered in the big-box phenomenon, and signaled its ultimate vulnerability to Internet retailing. “The web has cherry-picked the best products and offers them at a better price,” Johnson says. “Suddenly, Best Buy becomes a petting zoo, which is similar to what happened to Toys “R” Us.” Toy companies were also some of the earliest adopters of low-cost country sourcing. Go to a big industrial park in Shenzhen, China, where Foxconn Technology Group makes iPads, and in the back of the property you’ll see an old Mattel building. “They were there long before China was cool or anyone was talking about offshoring,” says Johnson.

Management lessons aside, “I do this mostly for fun,” Johnson says. He also does it for charity. In connection with the annual tech toy ranking, the Center for Digital Strategies organizes a toy drive for Upper Valley Toys for Tots. It kicks off on November 17 with a Tuck ’Tails event, and community members can drop off unopened toys in a collection box outside Byrne Hall until early December. Kids, after all, should be having at least as much fun as business school professors.