Many business partnerships begin in corporate offices, but in the case of Andrew Smith T’07 and Bob Hall T’07, theirs was forged at high-altitudes and in sub-zero temperatures.

During their second year at Tuck, Smith and Hall shared a house together in Norwich, VT. Later that year, Hall spent a semester in India where he and Smith went on several high-altitude mountaineering adventures. As Smith recalls, those experiences—shoulder-to-shoulder, navigating the wilderness in sub-zero temperatures—tell you all you need to know about the person beside you.

“Bob has incredible grit,” says Smith, founder and CEO of Outrider. “I knew from a personality profile, he is the type of person who sticks things out.”

Although Smith and Hall began their post-MBA careers on separate paths, the insights each gained from the experiences they shared at Tuck proved invaluable when Smith approached Hall in late 2017 with an opportunity to join his latest venture, Outrider.

Smith had previously grown ATDynamics, a company he founded during his first year at Tuck. ATDynamics patented and sold TrailerTails, attachments that reduce aerodynamic drag behind tractor trailers and save five percent of the fuel burned at highway speed. 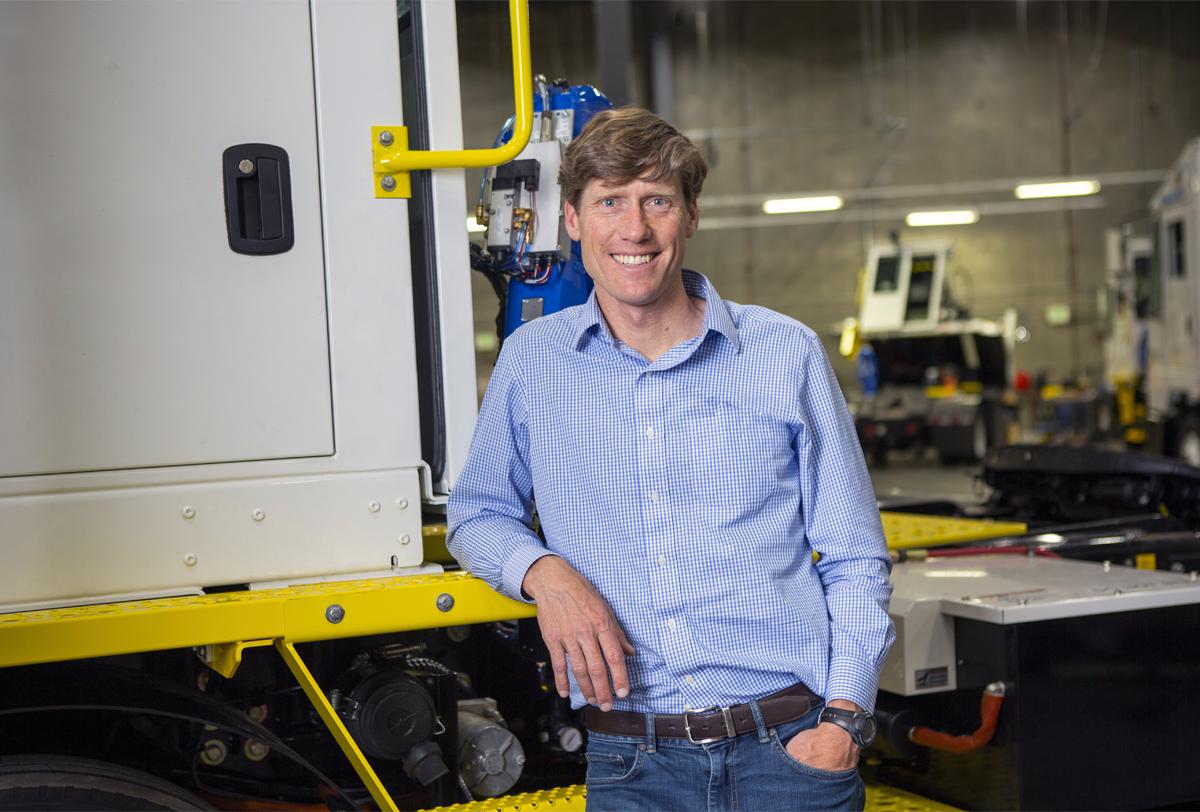 After he sold ATDynamics to EnPro Industries in 2015, Smith began exploring other areas of the trucking and logistics industry. He hoped to move away from a business model that relied on one-time sales and instead focus on recurring revenue through subscription services. At the time, Hall had just helped complete the sale of RadiumOne, a subscription marketing company where he served as chief strategy officer.

“I’ve known Andrew since our days at Tuck,” says Hall. “We spent a lot of time together in the Sierra Nevada, on the Appalachian trail, in the Himalayas where we went on multi-day treks way off the grid. That trust in understanding how Andrew makes decisions and prioritizes was very familiar to me.”

“We spent a lot of time together in the Sierra Nevada, on the Appalachian trail, in the Himalayas where we went on multi-day treks way off the grid. That trust in understanding how Andrew makes decisions and prioritizes was very familiar to me.”

Hall says trust is paramount in any entrepreneurial endeavor, which requires individuals to pour a lot of time and aspects of their identity into the success of a company. Although trust can be learned in an office environment, he says the benefits of a longstanding relationship outside of work lead to improving the speed and quality of communication.

“There are so many decision points and it requires a lot of discussion and dialogue,” explains Hall. “If there’s a lot of unspoken communication that is understood, over time you are able to more rapidly iterate and get decisions made and products built.”

In addition to the many outdoor experiences at Tuck, Hall says Professor Richard Sansing’s course on Managerial Economics continues to resonate more and more throughout his career.

“The financial and non-financial cost of all the behaviors of the company are something I think about every hour of every day,” says Hall, noting that the financial commitments of a startup can pale in comparison to the amount of time, effort, and attention needed to ensure the team is optimally aligned and focused on the one task that is most valuable to the company.

Trust in Smith’s leadership was always there, but before Hall could commit to joining Outrider, he had to have the same confidence in the product. Once he learned the specifics of Smith’s idea—a subscription business model that automates yard operations for logistics hubs—he was sold.

“A lot of companies, whole sectors of our economy, could benefit from a lot of simplification. Our product simplifies and automates a lot of complexity, which requires big thinkers and people that love applying smart approaches to old problems.”

Providing increased safety and efficiency to a key link in the supply chain, Outrider’s integrated, three-part system includes management software, autonomous zero-emissions yard trucks that feature vision-based robotics, and site infrastructure. According to Smith, the confined, private-property environment and set of repetitive tasks performed at distribution centers make them an ideal use case for autonomous technology, which eliminates the need for some 50,000 diesel-burning yard trucks currently operating in the U.S.

“I had never seen product-market fit like this,” says Hall, now COO of Outrider. “When we talked with large enterprises, there was an unbelievably positive response. This was an opportunity you look for your whole career.”

As Hall began pitching the business to investors, he found they also recognized Outrider’s clear opportunity and potential to deliver a first-of-its-kind service to customers.

“There were easy examples to contrast against,” says Hall, who has spent his entire career investing in or helping build high-growth startups. “Venture firms have seen dozens and dozens of pitches from autonomous vehicle projects aimed at robo-taxi business models and automated passenger vehicles. This was a very tractable technology and approach.” 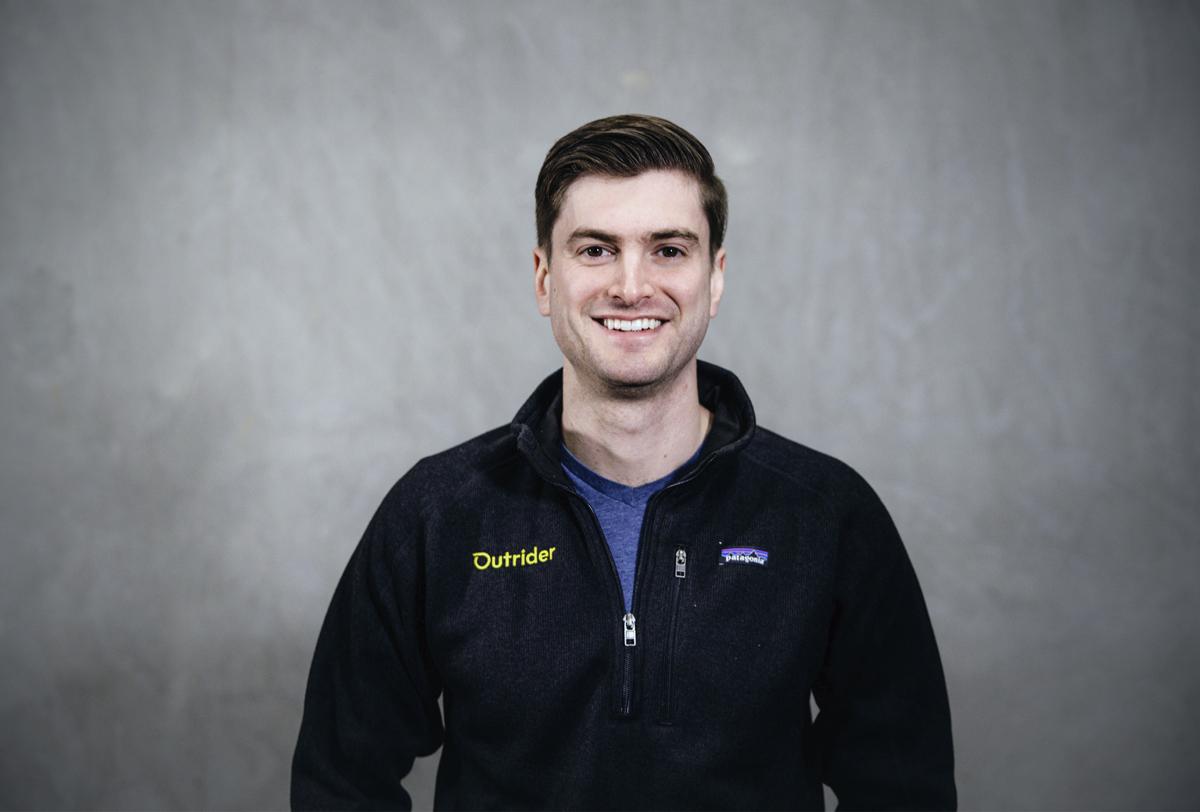 “Being here in Golden reminds me in many ways of being in Hanover,” says Tucker Johnston T’19, who joined Outrider after connecting with Hall and Smith. (Photo courtesy of Outrider)

Recalling the lessons he has learned since launching his first venture, Smith says one piece of advice stands out the most.

For Smith, the advice underscores the high priority he placed on building an exceptional team at Outrider—a lesson he took from the team-building culture at Tuck. Since joining Outrider as COO in 2018, Hall assumed responsibility for the company’s top-tier financing and strategy, including building a team that has now grown to more than 100 employees. About two-thirds of those employees are engineers with automation experience in military and commercial applications, as well as expertise in cloud computing, robotic manipulation, and logistics.

As part of a company that is building a first-to-market product, Hall says it was imperative they find candidates with “Day 1” credentials, who could start making immediate contributions as soon as they were hired. Ensuring Outrider could build and scale its product efficiently also required finding engineers who could manage the full life cycle of product development. As opposed to organizations that rely on engineering specialists, all of Outrider’s engineers are able to identify and collaboratively address all aspects of a problem.

“A lot of companies, whole sectors of our economy, could benefit from a lot of simplification,” says Hall. “Our product simplifies and automates a lot of complexity, which requires big thinkers and people that love applying smart approaches to old problems.”

A third Tuck alumnus, Tucker Johnston T’19, joined Outrider as finance manager in 2019. Focused on finding the right opportunity to apply his finance background at a tech-focused startup, Johnston’s self-directed search and Tuck’s responsive alumni network led him to connect with Hall.

Drawn by what he recognized as a world-class product and team, Johnston says he also found the Outrider culture a perfect fit.

“Being here in Golden reminds me in many ways of being in Hanover,” says Johnston of the Colorado-based startup. “There are a lot of very smart people from diverse backgrounds who come to work on this problem together.”

Hall also sees a connection between Tuck and Outrider’s people-focused culture and a shared love, appreciation, and respect for the outdoors. That’s no coincidence, he says.

What Does It Take?

In celebration of 50 years of women at Tuck, we asked alumnae what it takes to succeed in today's business world.