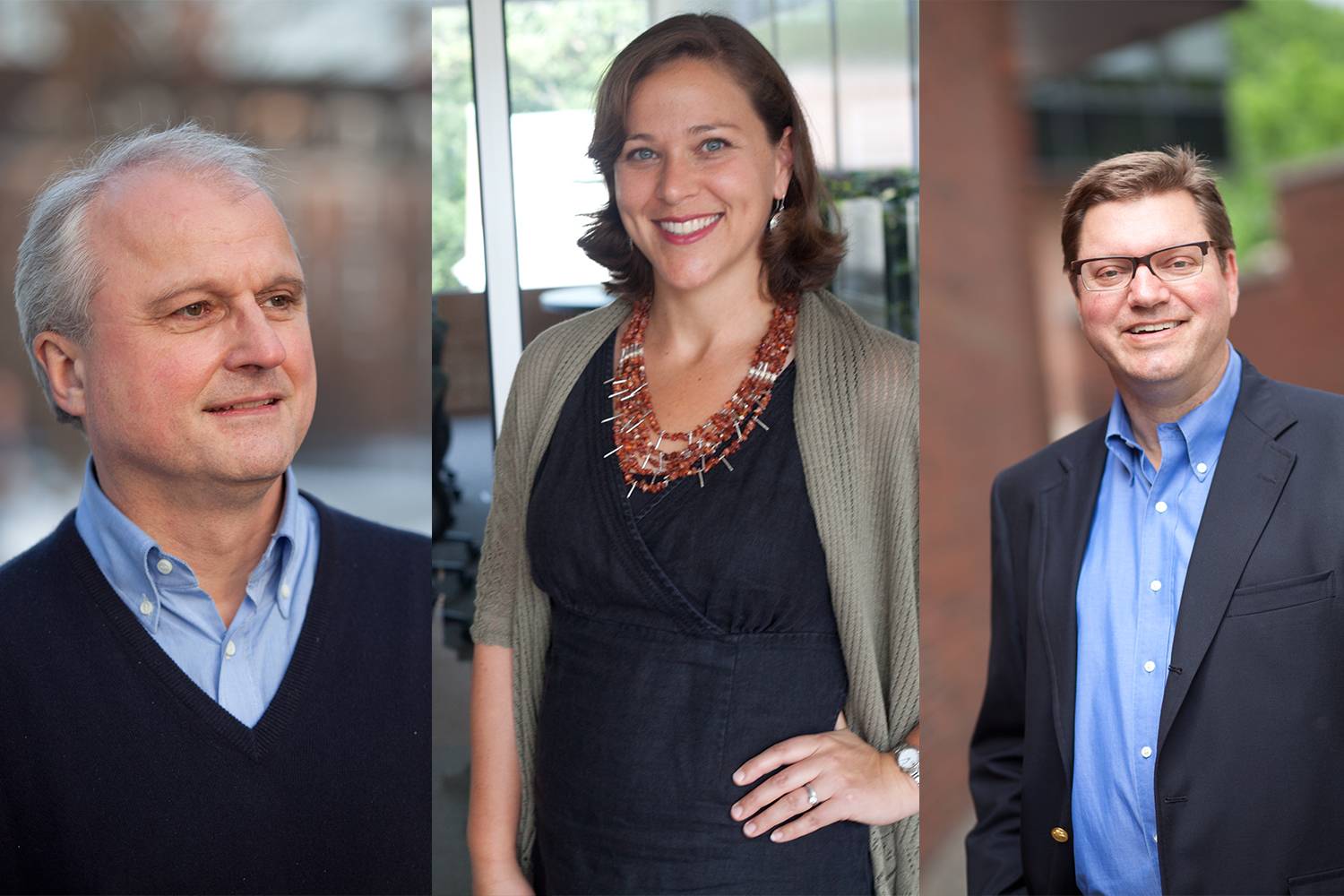 Tuck professors B. Espen Eckbo, Emily Blanchard, and Andrew Bernard are making an impact on the world of business.

B. Espen Eckbo, the Tuck Centennial Chair in Finance, gave the keynote address for a conference in May on Empirical Approaches to Compensation and Corporate Finance. Sponsored jointly by the Norwegian Research Council and the University of St. Andrews in Scotland where the event was held, the symposium was attended by academics from the U.S. and Europe, as well as faculty and researchers from St. Andrews who are studying corporate finance and issues of executive compensation.

Eckbo discussed the findings published in his research paper, “Are Stock-Financed Takeovers Opportunistic?”, co-authored with Tanakorn Makaew, a financial economist with the U.S. Securities and Exchange Commission, and Karin Thorburn, research chair professor of finance at the Norwegian School of Economics.

“A merger deal where the bidder firm pays for the target with its own shares is akin to buying a used car with a used car,” Eckbo says. “As a result, both parties struggle to assess the true value of the other.”

Though some experts have argued that this valuation uncertainty tends to give the bidder an upper hand—effectively allowing the bidder to fool the target into accepting overpriced shares—Eckbo’s research on a large sample of mergers involving publicly traded U.S. bidder firms questions this logic and presents new empirical tests that reject such bidder opportunism.

“My paper,” he says, “presents a competing, rational view in which bidders prefer to pay for the target with stock because this shares the risk of overpaying for the target with the target itself. The evidence is consistent with this view. And the paper’s methodology can be used in a number of other important settings where two parties exchange assets with uncertain true values.”

Tuck associate professor Emily Blanchard has spoken on the topic “Global Supply Chains and Trade Policy” at several recent high-profile conferences, including at The World Bank in March, Harvard Law School’s symposium recognizing the 20th anniversary of the World Trade Organization in April, the Centre for Economic Policy Research’s annual meeting in Copenhagen in June, and at Stanford University, also in June.

The bottom line is that global supply chains are already reshaping the contours of trade policy.

In a working paper on the subject, Blanchard, along with co-authors Chad Bown, a senior fellow at the Peterson Institute for International Economics, and Robert Johnson, assistant professor of economics at Dartmouth College, explore how global supply chain linkages modify countries’ incentives to impose import protection. They find that global supply chain trade has reduced tariff barriers both by increasing the use of bilateral trade preferences and by discouraging the use of temporary trade barriers, especially against China.

“The bottom line,” she says, “is that global supply chains are already reshaping the contours of trade policy.”

Andrew Bernard, the Jack Byrne Professor of International Economics at Tuck, traveled to Yantai, China in June to present a keynote address on “Offshoring and Reorganization,” at the China Center for Economic Research’s Summer Institute.

CCER is a Peking University-based think tank dedicated to bringing together young scholars of economics and management theory to both further integrate the university’s teaching and research and contribute to China’s economic development. This was CCER’s first such symposium in what the organizers expect will become an annual event. Attendees included a small group of top-level western academics as well as approximately 40 professors from elite Chinese universities.

Bernard, who was invited to speak by Peking University’s Deputy Dean Miaojie Yu, presented findings from his recent research assessing how firms’ decisions to relocate their primary activities to foreign countries affect not only their aggregate employment, but also their employment across activities.

He and his co-authors—professors Teresa Fort of the Tuck School and Valerie Smeets and Frederic Warzynski of Aarhus University in Denmark—have determined that over time, offshoring firms change their employment composition significantly so that they ultimately employ a much higher share of technology and research-related workers and also increase their R&D expenditure more than their non off-shoring counterparts.

The results of their studies, Bernard says, “point to important long-term implications of offshoring. Firms that relocate their main activities to a foreign country are more likely to shift their domestic resources into innovative activities. Since innovation is a major determinant of future performance, this shift has important potential implications for the long-term effects of offshoring on productivity and growth.”