The new Entrepreneur Initiative program brings entrepreneurs to campus each month for advice and networking. 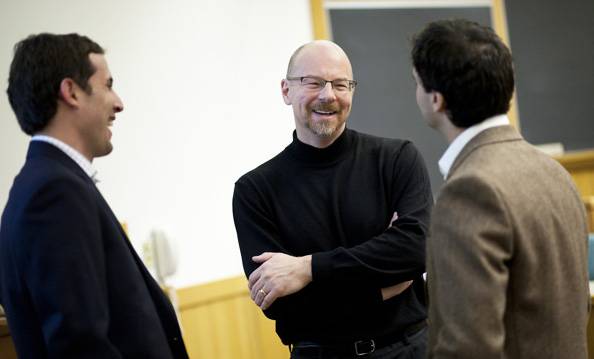 The new Entrepreneur Initiative program brings entrepreneurs to campus each month for advice and networking.

At the end of March, serial entrepreneur Mark Ranalli T’92 stood before a room full of Tuck students and told them the story of his business life. It started in 1996, when he became vice president of Fax International, a global IP communications company. Then he launched BaseSix, a marketing strategy firm that served companies such as AT&T Broadband, AOL, and HBO. From there he founded Helium, Inc., which bills itself as the world’s largest editorial content provider and was purchased by R.R. Donnelley last year. After Helium came OurStage, a website where musicians go to get discovered.

On the whiteboard, Ranalli had written some topics for discussion:

Ideation phase
Funding
Execution lessons
Should you work with a VC?
Exit challenges
Life as an entrepreneur
Boards, advisors, friends

When Ranalli opened the floor for questions, they came hurling at him fast and thick. “How did you protect Helium from copycats?” one student asked. The company was susceptible to such a problem because it was the first to create a platform for crowdsourced, peer reviewed writing. “We patented it,” Ranalli said, “and we did it better.”

Another question came soon after: “During the idea phase, how do you determine to move forward or scratch it?” Ranalli answered with intuitive advice: research, gut feeling, test as much as possible. Then he added a pithy axiom: “be right, but be on time.” To illustrate the point, he explained that he had the idea for Dropbox in 2003, but the costs of networking and storage were too high back then. “Now it’s a great business,” he said.

Ranalli is Tuck’s first Entrepreneur-in-Residence (EIR), a role organized by the Entrepreneurship Initiative. The idea flowed from the desire to provide more extra curricular entrepreneurship support for students. “We wanted to increase students’ exposure to your classic entrepreneur,” said Joaquin Villarreal T’08, the manager of the initiative. “It’s the person who has an idea, has no money, quits a job, and tries to pull it off. Those are usually the most fun for students to hear, and it’s a story they can relate to.” The EIR comes to campus for a day or two and then has “office hours,” via email or phone, for an entire month. Most of the time, students can contact the EIR directly with their entrepreneurship-related questions.

Villarreal chose Ranalli because his narrative is a bit unconventional. Rather than rely on venture capital firms for funding his startups, Ranalli has always preferred to raise money through angel investors, sovereign funds, and broker-dealers. “That’s an exhausting way to do it,” Ranalli told the students, “but we were able to raise $16 million for Helium off a PowerPoint deck.”

The lesson, according to Villarreal, is that there’s a wide range of financing options for startups, each with its own form of value. “If you just want money, there are various ways to get it, and at varying costs,” he said. “If you want money plus advice, there are other sources you can tap.”

Ranalli was also a good example because he’s started companies on both coasts. “It’s nice for students to see that you can move around, that you don’t need to be in Silicon Valley to do a technology startup,” Villarreal said.

Shortly after his hour-long talk, Ranalli sat down with David Weisburd T’12, who’s working on a business that uses a proprietary algorithm to help people find rental apartments and roommates. “He gave me specific advice on executing my business, on how to solve the chicken/egg problem, and he offered to introduce me to Craig Newmark, the founder of Craigslist,” Weisburd said.

Villarreal is having no trouble lining up EIRs for the coming months. “The Tuck network is so big, relative to the class size, and everyone is so eager to help”

“This is a very clear value add for students,” Villarreal continued. “It’s just pure experience coming in and telling you how it worked.”