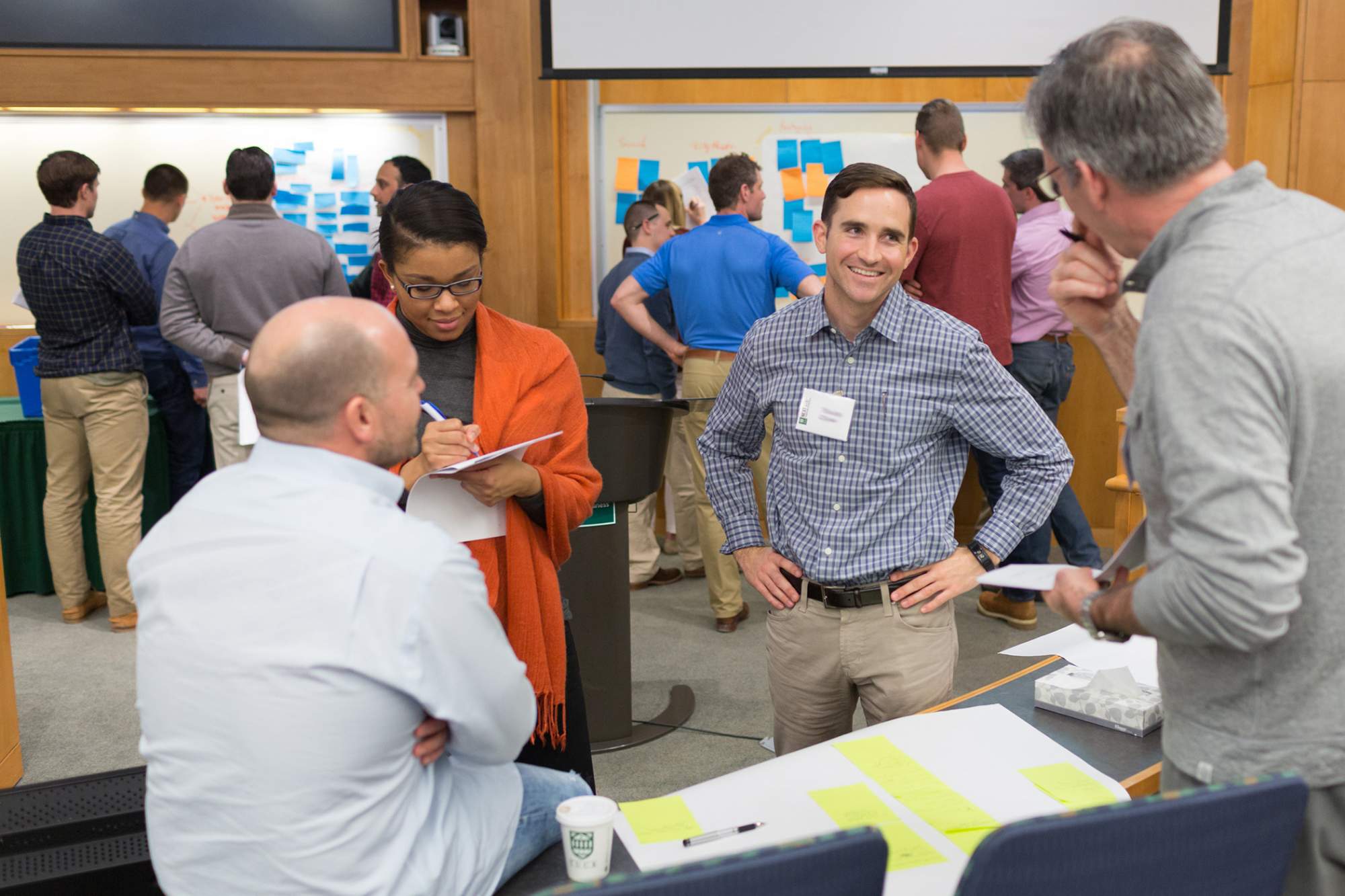 When Business Is Next

Tuck’s new certificate program, Next Step: Transition to Business, is customized for veterans and elite athletes.

Julien Bahain is a three-time Olympian who won the Bronze Medal in rowing in the 2008 Summer Olympic Games in Beijing. Like many elite athletes, Bahain has devoted most of his life to achieving a high level of performance in a very specific skill. As a member of the Canadian National Team, Bahain trained three times per day, from 6:30 a.m. to 6:00 p.m., and traveled to regattas during half of the year. The schedule left little room for anything else. In late March, Bahain decided to retire from rowing. “I was faced with the question, What do I do now?” he says. “I don’t have any connection to anything outside of rowing. I didn’t have time to create any link to the real world.”

What Bahain did first, before officially retiring, was attend the Next Step: Transition to Business program at Tuck, a first-of-its-kind business education curriculum targeted at elite athletes and military personnel. The inaugural session of Next Step took place at Tuck during the first two and a half weeks of March, when the school welcomed 67 veterans, Olympians, and other professional athletes to Hanover for an integrated experience designed to aid their transition to a new career in the business world.

For Punam Anand Keller, the faculty director of the program and the Charles Henry Jones Third Century Professor of Management, the impetus for Next Step is straightforward and fits perfectly into Tuck’s mission. “Tuck trains management talent for the best companies,” she says, “and they’re looking for management trained military veterans and elite athletes.” Companies are seeking qualified people from these professions because they’ve proven themselves to be focused, disciplined team players driven to achieve goals. “When they’re given a task,” Keller says, “they can repeat it over and over again until they can beat anybody else doing it. They have great leadership skills, and they’re very competitive. And Tuck can provide them with the proper foundation in business.”

“The thing I’m really going to take away is the power of the group, and how putting people with an open mindset together releases so many ideas and good interactions,” says Julien Bahain. “We all have something to learn from each other.”

That foundation comes from almost three weeks of classes, guest speakers, career coaching, and group activities, all coordinated to build on the participants’ backgrounds and equip them with the tools to land a job and excel in it. The courses cover a wide range of topics found in the MBA core curriculum, such as strategy, finance, marketing, communications, operations, and negotiation. The program’s opening speaker was Jim Craig, the goalie for the famed U.S. Olympic hockey team that beat the Soviet Union to win the Gold Medal in the 1980 Winter Games. Additional guest speakers included General (Ret.) Stanley McChrystal, JetBlue President and CEO Robin Hayes, and Paul Raether T’73, among others. The program was supported by organizations such as BlackRock, Boston Consulting Group, Goldman Sachs, PowerAdvocate, Morgan Stanley, and the United States Olympic Committee, to name a few. An entire day, plus shorter sessions sprinkled through the program, was devoted to career development and coaching.

In the military it’s not important for one to be likable, but it’s really important to connect with people in the civilian world.

The combination of academic rigor, networking, and career advice was attractive to Joan Serna Cardona, who retired last year from her position as a personnel security manager in the Army. She had been deployed to Afghanistan and Jordan, and she enjoyed her time in the military, but was looking to enter a career that gave her more room for advancement. “I wanted a place that valued the time I put in, and to be recognized for what I did,” she says. The Army provided her with a week of transition training on the logistics of leaving the military, but she needed something more substantive. Next Step helped her figure out which of her skills were transferrable to business, and learn the language of civilian commerce. She was particularly struck by the session on leadership, with Professor of Management and Organizations Pino Audia. “He talked about different leadership techniques,” she says, “and I realized that in the military it’s not important for one to be likable, but it’s really important to connect with people in the civilian world.”

Tony DeCenzo has a different perspective on the military. As a Navy SEAL who has seen combat all over the world, he has had to forge strong bonds with the other members of his unit—it was imperative to everyone’s safety. Recently, he’s been tasked with designing combat vehicles, a job that puts him out of harm’s way, but also doesn’t let him cultivate the camaraderie he was accustomed to. “I like leadership positions, but at the same time I like to lead by example,” he says. He’s planning on retiring from the Navy later this year, and Next Step is helping him transition into a job in sales. “I will continue to reach back to everything I’ve learned here,” he says, “but the part that I overlooked was the social experiment that took place here. This group bonded so quickly. There are so many people here who have phenomenal backgrounds and you’re humbled by everybody.”

Bahain, who was able to leverage Next Step to land a project management position in British Columbia, echoed that sentiment. “The thing I’m really going to take away is the power of the group, and how putting people with an open mindset together releases so many ideas and good interactions,” he says. “We all have something to learn from each other.”

Meet a few participants of the 2017 Next Step program. 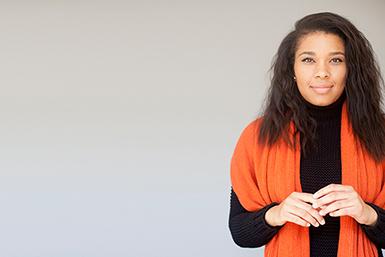 After graduating from UCLA with a degree in math and economics, Jan Ingram joined the Navy, committed to learning naval operations at every echelon, from operating all the systems on a single ship in Japan, to coordinating exercises and training sessions for a squadron in Singapore, to her current position at the Pentagon as a surface warfare officer. “It’s been great for me to see this colossal organization from all these different levels,” she says.

Still, Ingram is ready to transition out of the Navy and into health care administration. Next Step is serving as Ingram’s ramp to her future career, and she’s been struck by the richness of the curriculum and its ability to impart critical business skills in a short timeframe. But, most of all, Ingram has enjoyed meeting her colleagues in the program.

“The initial day, all the military people clustered together and we used all this jargon and acronyms,” she recalls. “But when we started mingling with the athletes, it all clicked. We have a lot in common.” 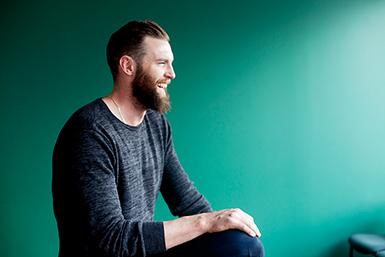 Ontario native Conlin McCabe competed in the men’s eight at the 2012 London Olympics where he received a silver medal. Rowing competitively didn’t stop him, however, from graduating the following year from the University of Washington with a bachelor’s degree in geography. He went on to compete in the 2016 Olympics at Rio de Janeiro where he placed sixth. Outside of his regular training sessions, he found himself intrigued by the world of business.

Next Step presented the perfect opportunity to further explore that interest. It has also acted as an important transition tool for McCabe as he considers not only pursuing an MBA, but also a future in entrepreneurship. “As an athlete, you spend a lot of time working on yourself so you can contribute to a team,” he says. “I think I could have similar success in the entrepreneurial space. And I get excited thinking about creating my own business.”

An intensive two-week immersion into the fundamentals of business, Next Step was a bit like drinking water from a fire hose, says McCabe—but in a good way. “What I enjoyed the most was how much I was able to absorb in such a short amount of time,” he says. “It speaks to the quality of professors at Tuck. Not only do they possess this great knowledge of what they’re teaching, but they’re also passionate about it. When they get in front of the classroom, it just flows out of them in a natural way, and it’s easy to understand.” 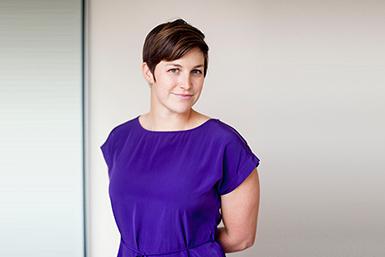 In 2012, Caitlin Leverenz Smith qualified for the London Olympic Games and won the bronze medal in the 200-meter Individual Medley. After London, Leverenz Smith returned to U.C. Berkeley to finish her degree in public health, and then worked as a professional swimmer while training for the 2016 Olympic Games in Rio. She missed qualifying by mere fractions of a second. She was disappointed, but also aware of the opportunity she had been given. “It made room for a lot of growth and questioning who I am outside the sport of swimming,” she says.

Next Step is the latest venue for that exploration. It has accelerated her process of self discovery, confirming attributes and preferences that took her six months to learn after missing Rio. “Every day is filled with extremely dense experiences and skills that add onto each other,” she says. “I’m drained at the moment, but at the same time stimulated, excited, and full of knowledge I didn’t have before I came.” 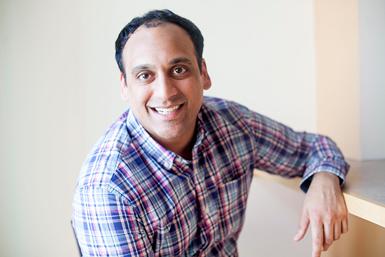 Amit Patel is the kind of guy you want living next door. An Eagle Scout. A volunteer firefighter. A Blackhawk helicopter pilot who conducted 234 combat missions in Afghanistan. An Army captain and recruiting company commander who lists “youth empowerment,” country music, and yoga as interests on his résumé.

He has lived his life with a commitment to public service. With his Army command ending later this year, Patel is searching for the right career in the civilian world. That’s what brought him to Next Step.

“I wanted to see what the real world offered,” he says. “This program was attractive because it’s not an MBA with a two-year commitment, but an opportunity to get my feet wet and realize what I don’t know. It’s kind of scary but also inspiring.” 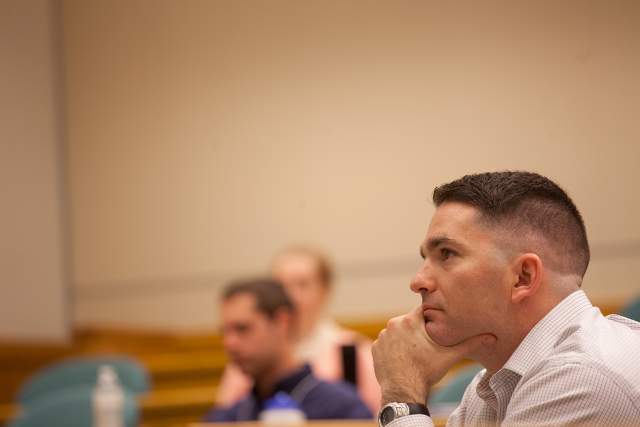 Next Step: Business Skills for Veterans and Athletes

Tuck launches Next Step: Transition to Business, a two and a half week learning experience specifically designed for veterans and elite athletes looking to make a move into the business world. 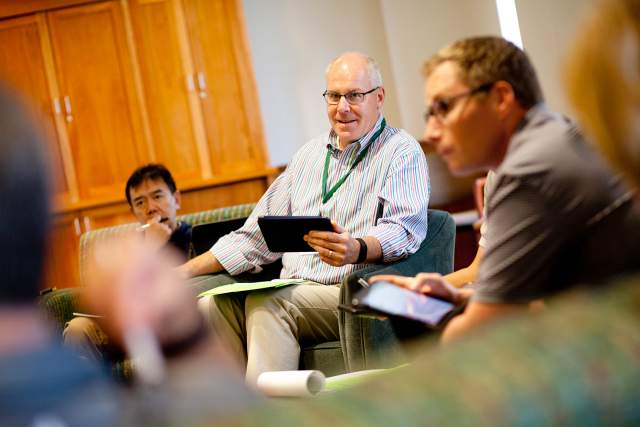 The new Advanced Management Program at Tuck gives C-suite executives the skills to succeed at the highest level.