With a new scholarship program and innovative initiatives, Tuck is more attractive than ever to Latin American students. 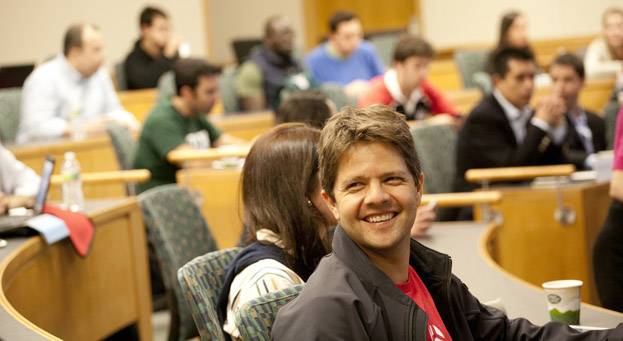 With a new scholarship program and innovative initiatives, Tuck is more attractive than ever to Latin American students.

Macarena Herrera T’12 has an enviable problem. She and her husband Sebastian came to Tuck from Uruguay and they each received full-time job offers in marketing, the field they hoped to enter after working for six years as auditors and consultants in Montevideo. The problem? Herrera’s job offer is in Portland, Maine, while her husband’s is in New York City. Will they go to a charming seaside city in New England or the world capital of commerce?

Deciding among job offers is a tough task, but not an uncommon one for Latin American students at Tuck. Even though these students often need employers willing to sponsor their United States residency, they are just as successful as their American classmates in finding high-paying jobs in the U.S. and elsewhere. And with a close-knit community on campus and the highest percentage of Latin American students of any top business school, they feel right at home in Hanover.

Now, with a new scholarship program and other initiatives, Tuck is making it even easier for talented Latin American students to come to the school and find their desired job.

“The scholarship is a very objective metric,” says Pablo Navarro Aristizabal T’13, a native of Colombia. He considered the usual factors when choosing a business school—prestige, career placement and academics—but when he learned of his scholarship award he knew Tuck was the right place. “It makes the decision a lot easier,” he says, “and personally it made the financial aid process less stressful.”

Latin American Advisory Board
Tuck has a strong network of alumni based in Latin America. They’ve always been a resource for prospective and current students, but now a group of them have joined the new Latin American Advisory Board and are in close contact with the school on a regular basis. The board, which holds its first meeting in Sao Paulo in September, consists of executives in a range of industries in Latin America. They will aid in identifying the best applicants and help them apply, while also serving as a pipeline to the job market in their regions.

Admissions Representative in Latin America
Geographically, Tuck is far from Latin America. Kristine Laca, a former director of admissions at Tuck, brings it a lot closer. Based in Uruguay, Laca serves as Tuck’s agent for Latin America. She helps to recruit students, conduct interviews, and is a general source of support and information for students in the region.

“She was really helpful,” says Herrera. “We asked her questions about the application essays, and she interviewed us in Uruguay. It felt like every time we needed something, there was someone to help us.”

The Culture
With a small student body and a focus on the two-year MBA degree, Tuck has been described by many students and alumni as an authentic community, a place where you see friendly faces and people working together in teams to accomplish goals both academic and extra-curricular.

Pablo Navarro Aristizabal experienced that from the moment he first e-mailed the head of the Hispanic American Student Association and told him he wanted to visit the campus. The next day, Aristizabal received a warm response, offering to pick him up at the airport and host him at the house of two Brazilian students. When he arrived at Tuck he met many other Latin American students, was given a tour of the campus, and received some valuable advice about the application process.

“When I left, I said to myself, Wow, this is the type of community I want to be a part of,” he says. “These are the kind of people I want to associate with as an alumnus.”