What compelled me to run for governor is I want to make New Hampshire an even better place to live,work, raise a family, and grow a business. We’re going to need leaders who are forward-looking, business-minded, and care deeply about the people of our state. 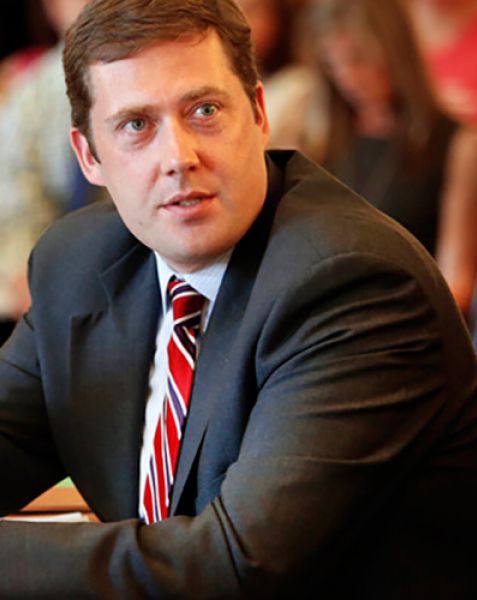 For most of his professional career, Colin Van Ostern T’09 has been on the lookout for win-wins. When he was a brand manager at Stonyfield Farms, the organic yogurt maker, the company invested in lightweight packaging and more efficient delivery routes, simultaneously reducing energy costs and greenhouse gas emissions. As a member of New Hampshire’s five-member Executive Council, a sort of board of directors for state government, he induced the body to put all of its documents on iPads and the Internet, both saving paper and increasing transparency. And as one of the first employees at Southern New Hampshire University’s College For America, which helps employers provide their frontline workers with a college degree, he helped launch a new business model that developed managerial talent for firms while giving unskilled workers their first chance at higher education.

Now Van Ostern wants to continue that search for win-wins as New Hampshire’s next governor. He announced his campaign in October and since then has been building grassroots support in the cities and small towns around the state. The effort has paid off recently, as Van Ostern has received endorsements from the mayors of Concord, Nashua, and Rochester, and from New Hampshire Congresswoman Ann McLane Kuster D’76. “What compelled me to run for governor now is that I want to make New Hampshire an even better place to live and work and raise a family and grow a business,” he said. “We’re going to need leaders who are forward-looking, business-minded, and care deeply about the people of our state to make sure that happens.”

Van Ostern is not new to politics. He moved to New Hampshire in 2001 to be the communications director for then-governor (now U.S. Senator) Jeanne Shaheen. He took a job in public relations at Tuck in 2006 when his wife, Kristyn McLeod Van Ostern T’08, enrolled in the MBA program. But it wasn’t long before he decided he’d rather be a student than an employee. “I had an opportunity to work with a lot of the faculty and was blown away by the level of content knowledge, experience, and care they brought to their work,” he said. “Seeing that up close made it really clear to me how much value comes out of the program for students.” The following year, he matriculated as a member of the class of 2009.

Van Ostern’s first private sector job after Tuck was an assistant brand manager at Stonyfield, in Londonderry, New Hampshire, where he was put in charge of the company’s smallest product line—“a rounding error on the company P&L,” he said. But he was promoted a few times and was ultimately responsible for several brands, including the kids and baby yogurt lines, that totaled over $100 million in revenue.

Stonyfield, the world’s largest maker of organic yogurt, provided a good vantage point for Van Ostern to observe the interaction between government and business. And he saw a few areas where he thought the government could do a better job helping businesses thrive in a mostly rural state. “There was a policy debate about whether to bring passenger rail up from Boston to central New Hampshire,” he said, “and at the time, the Executive Council opposed it. I thought that was the wrong policy.” That experience and others caused him to seek one of the five seats on the council, which he won in 2012. He’s now in his second term, representing District 2.

Three years ago, Van Ostern left Stonyfield for a job at Southern New Hampshire University, a private nonprofit university that was starting a spinoff college called the College For America (CFA). The school’s mission is to provide low-cost, fully-accredited associates and bachelors degrees to workers such as call center representatives, administrative assistants, and office supervisors through a new competency-based online platform. The move reflected his belief that “one of the most important levers for economic development is the strength of the workforce,” he said. New Hampshire has the fourth lowest unemployment rate in the country—3.2 percent— but a large proportion of young people still move out of the state when they finish high school and college. When he began, CFA didn’t have a single paying student; today, there are 3,000 students, 300 employees, and the college has annual revenues approaching $10 million. He sees his work at CFA informing one of his primary public policy goals: fulfilling an “urgent need for us to attract and keep new people, families, and businesses in New Hampshire,” he said.

As he juggles his responsibilities at CFA, the Executive Council, and in a multi-million-dollar gubernatorial campaign, Van Ostern is regularly struck by the value of his Tuck experience. Some of the classes he took proved formative, such as Analysis for General Managers, which he took with Sydney Finkelstein, the Steven Roth Professor of Management, and Business and Climate Change, an elective taught by Anant Sundaram. “I’ve thought back to those courses frequently,” he said, “applying lessons from the Yellow Tail case in AGM, and about how clean energy projects can drive both job growth and costs savings.”

Furthermore, Van Ostern has witnessed the power of the Tuck network. As a student, he had important conversations with alumni in the business world. And as an alumni himself, he’s given back by hosting First-Year Projects at Stonyfield and CFA. Now that he’s running for governor, Van Ostern is seeing a different dimension of the Tuck network. Former Tuck dean Colin Blaydon is hosting a meet-and-greet for Van Ostern at his house in San Francisco in February, and alumni now working at the Parthenon Group are hosting an event in Boston. Most recently, he attended a house party in Hanover, where two deans, three professors, and Tuck alumni from four different decades were in attendance. “It’s been an extraordinarily helpful network for me as I am running for office,” he said.

Van Ostern has 11 months to crisscross the state, raise funds, and build upon the support he’s already garnered. If all goes well, he’ll get the big victory that will mean more win-wins for New Hampshire.