We had 33,000 employees, and they were counting on us to do what was right. I took that very seriously because I knew that whatever decisions we made, we would all have to live with them for the rest of our lives. 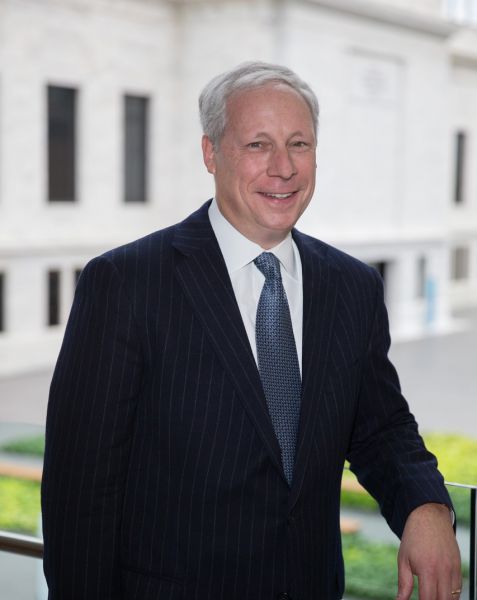 Peter Raskind D’78, T’79, DP’11 never intended to become a crisis specialist. He attended Dartmouth and Tuck on the 3/2 program, graduating in five years with his bachelor’s and an MBA, and went into banking. By July 2007, he had risen to become chairman, president, and CEO of National City Corporation, one of the biggest banks in the United States and a venerable institution in the city of Cleveland.

The following week the subprime mortgage crisis struck in earnest.

“From that point forward it was just a wild ride,” says Raskind, who found himself in the very center of the financial hurricane. National City was vulnerable due to some of its real-estate exposures. Though many of the details remain confidential to this day, one thing became clear early on: there would be no federal bailout for National City.

Through months of fraught meetings and complex negotiations, Raskind and his leadership team pursued their only viable option, the merger of the 163-year-old bank with a competitor. As they worked, storied institutions fell like dominoes, sending pulses of panic through the world’s financial markets. Every day, Raskind went to work knowing that National City’s shareholders, depositors, and employees were depending on his leadership.

“We had 33,000 employees, and they were counting on us to do what was right,” Raskind says. “I took that very seriously because I knew that whatever decisions we made, we would all have to live with them for the rest of our lives.”

Raskind ultimately negotiated the merger of National City with PNC Financial Services Group for $5.6 billion, a fraction of the bank’s pre-crisis valuation. When the deal closed on the last day of 2008, Raskind left the bank.

He was fifty-two years old and facing an unplanned early retirement.

Then, early in 2009, a scandal splashed across the pages of Cleveland’s newspapers. The CEO of the city’s Port Authority had been dismissed amid questions about the grandiose port relocation plan he had championed. Shortly after, Raskind received a call from the PA board of directors asking if he’d be interested in taking on the role of interim CEO. He floated the idea by his wife.

“She said, ‘I can't believe you're even considering this. For the last 14 months you've been fantasizing about getting your name out of the newspapers.’” But for Raskind, it made sense. Bringing order from the chaos of the Port Authority would allow him to use the skills he’d honed in 30 years of business. It also appealed to his sense of civic duty.

Refusing a salary gave him the freedom to make hard choices. “No one could say I was doing it for anything other than reasons of citizenship,” he says. The previous CEO had outlined a lavish scheme to make Cleveland the number-one container port in the Great Lakes region. It was Raskind’s job to pull back the curtain.

“When I arrived I didn't know any anything about ports. I started asking questions like, ‘What's the total container volume today in the Great Lakes?’ The answer was virtually zero. Big container ships can’t get down the St. Lawrence to the Great Lakes. They’re too big.”

Raskind determined that the plan was “Swiss cheese”—full of holes. He killed the relocation scheme and spent the next few months re-establishing financial order before handing the reins to the new permanent CEO.

About a year later, when the superintendent of the Cleveland Metropolitan School District announced his resignation three months into the school year, leaving behind a $47.5 million budget shortfall, Raskind was again approached for help. Again he said yes, asking only $1.

“Public schools have always been sort of the foundational avenue for upward mobility in this country, and I have always felt like a walking example of that,” says Raskind, whose mother was a homemaker and father had worked as a union dress cutter in a garment factory. Neither had gone to college, but with the help of loans and generous financial aid, Raskind had gone from Medford Public Schools in Massachusetts to Dartmouth and to Tuck. “If I felt some citizenship responsibility with respect to the Port Authority, with the schools I felt it 10 times as strongly,” he says.

Raskind says through his business career, he’s learned that while layoffs are never ideal, there is a right way to approach them, “with good process and with respect for the human beings who are involved,” he says.

The roots of that philosophy reach all the way back to Tuck.

“I have a vivid memory of my Organizational Behavior professor, Mariann Jelinek, saying, ‘If you end up managing and leading people, you may think that you can just employ their skills and their experiences, but that’s not the way it works. These are whole human beings and you need to think of them as whole human beings, and if you don’t, it’s at your peril.’ That made a huge impression on me.”

Raskind’s leadership have earned him a reputation as a good man in a crisis, but he’s no adrenaline junkie. Today he sits on a handful of for-profit and nonprofit boards, including as chair of the Cleveland Museum of Art.

“As I transition from full-time work to whatever the next chapter is, these experiences for me have been really terrific,” says Raskind, whose schedule now includes time to travel with his wife and playing as much bad golf as he can stand.