The skills you develop at Tuck teach you how to work with people, how to think critically— those are good skills to have in media, journalism, or any industry. 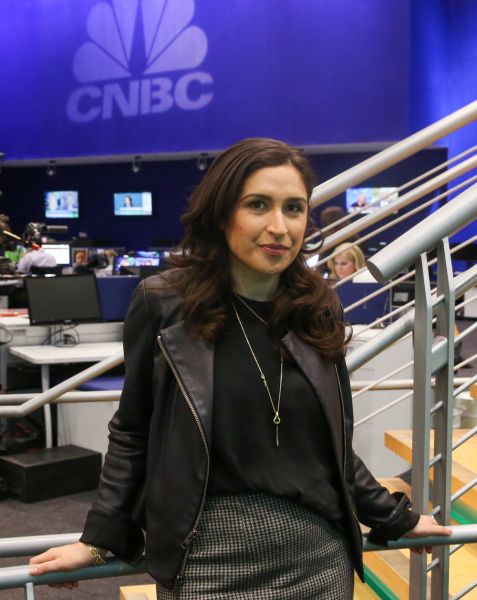 When Toys “R” Us was weighing bankruptcy, Lauren Hirsch T’12 was the first to report the story. As a consumer and retail reporter for CNBC, Hirsch’s job is to cover transformative corporate events of the country’s biggest retailers and consumer packaged goods companies, including mergers, acquisitions, and bankruptcies.

Good thing she went to business school. “The benefits of Tuck have lasted and help me in my job all the time. I’m constantly talking to people in finance and business,” Hirsch says. “Tuck taught me to have the confidence I needed to enter a room full of people and know what to do.”

Hirsch wrote for her college newspaper while studying comparative literature at Cornell University, which she graduated from in 2007. She dreamed of one day working as a journalist but wasn’t sure it was a viable career path. After college, she spent a few years working at Random House, first in contracts and later helping with their eBooks efforts, before deciding to attend business school.

“I wanted to be a journalist and thought about going to journalism school, but that’s a pretty unpredictable path. It didn’t feel like a practical choice,” she says. “Business school felt like a smarter choice. I could graduate and go into marketing or consulting, or I could go into journalism armed with an MBA.”

At Tuck, she loved meeting people from around the world. Her best friend at Tuck, who went onto become a finance professor, helped Hirsch with finance and economics, while Hirsch assisted her friend on writing projects. She did her summer internship with CNN in Atlanta, working on the business side of the news organization but secretly wishing she were on the reporting side.

After graduating Tuck in 2012, Hirsch got a job at Mergermarket as a reporter, covering mergers and acquisitions for the trade publication, where she eventually transitioned to a senior reporting and editing role. “It was a great way to get my foot in the door,” she says.

In 2015, she scored a job at Reuters, again covering consumer retail M&As and IPOs, first as a correspondent and later as team leader. There, she broke big deals like Bass Pro Shops’ acquisition of Cabela’s, Burger King parent’s acquisition of Popeyes, and Snap’s confidential IPO filing. “Breaking those big stories is the best feeling in the world,” she says. “It’s a constantly rewarding job.”

Last year, Hirsch snagged her current role at CNBC, where the company is redeveloping its online identity. “Tuck taught me to ask as many questions as I can, do as much research as I can, meet as many people as I can,” she says. “The skills you develop at Tuck teach you how to work with people, how to think critically— those are good skills to have in media, journalism, or any industry.”