To deliver a campaign, you need to combine so many teams, inside and outside—digital, creative, broadcast, public relations, and agency partners—all together, communication skills are very important. 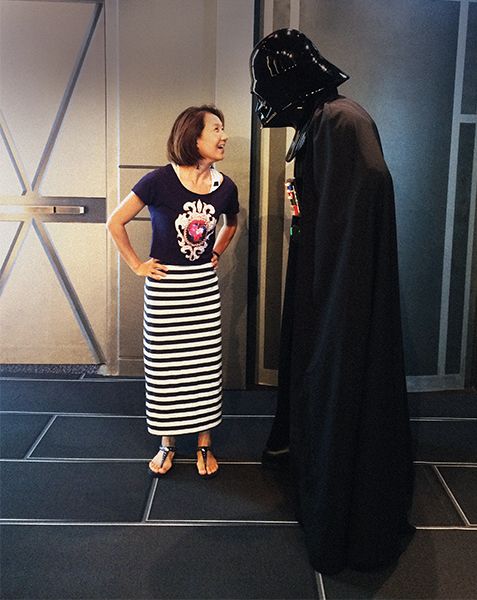 As digital marketing manager for Walt Disney Company’s new theme park in Shanghai, China, Nancy (Qiaolan) Zhuo T’13 faced a daunting task: introducing one of the largest brands in the world to the largest country in the world. “Chinese people are not that familiar with Disney, especially the theme park,” says Zhuo. To bridge the divide, Disney adopted the principle, “authentically Disney, distinctly Chinese” to remain true to the brand while adapting it for a new culture. “Disney is such a positive brand, you don’t want to corrupt that,” says Zhuo. “It was very exciting, very challenging, and very entrepreneurial as well.”

Growing up in China, Zhuo dreamed of being a foreign news correspondent. Working for five years with China Radio International, however, she became disillusioned with the news business. Though she produced her station’s top news show and managed an editing team of 15, she spent late nights and early mornings inside a soundproof studio, most of the time communicating with her team via online messenger. “I felt like I was not that connected to the outside world,” she says.

When a friend invited her to a Tuck’tails event in Beijing, she instantly connected with the warmth and friendliness of Tuck alums. The next year, she passed up an opportunity to go to Africa as a foreign correspondent to attend the school. The decision transformed her life. “I was a very different person before and after Tuck,” she says. “It was such a supportive environment, I felt like I could do anything and people there would be there for me.”

After enjoying an internship at Disney-owned ESPN, she applied for a job with the company in China, which she has found to be the opposite of her isolated radio experience. “To deliver a campaign, you need to combine so many teams, inside and outside—digital, creative, broadcast, public relations, and agency partners—all together,” she says. “Communication skills are very important.”

Zhuo felt up to the task after the heavy emphasis on teamwork and collaboration at Tuck. And even though she has focused on marketing, the background in general management and analytics at Tuck helped build her confidence—especially when early on she found herself having to make a presentation to Disney Parks and Resorts’ global CEO. “At Tuck we had the opportunity meet a lot of executives from different companies, so I got to know how the conversation would go and what they are looking for in a conversation,” she says.

Currently, Zhuo takes on a diverse set of responsibilities, including managing the company’s social media channels, driving digital partnerships with China’s internet giants such as Tencent, Alibaba, and Baidu, as well as other up-and-coming companies such as bilibili, and developing interactive online campaigns using videos, gaming, and stories. In a country where so much is done digitally, the role she and her digital marketing team plays has moved beyond her expectations. It is, she says, “a centerpiece among all marketing efforts.”

While Zhuo enjoys the challenge of digital marketing, she likes that the company includes opportunities to grow. In the future, she says, she may try her hand at Park operations, sales, and even revenue forecast and management. “I can see myself with this company for many years to come.”

When Ana Sanchez D'97 T’03 joined Colgate-Palmolive in 2003, she thought she’d only stay for a few years and move on. Nearly 15 years and a couple of international assignments later, she’s still with the company, serving as its UK marketing director.

At Tuck, Heather King D'81, T'86 dove into an independent study that laid the groundwork for a career that included stops at Apple, NeXT and the experience-design firm Eight Inc.