Daniel Yergin on the Balance of Confidence

“Commanding Heights” author Daniel Yergin challenges Tuck graduates to rise to the occasion. “Rebuild the trust and reset the balance of confidence on which a growing global world depends.” 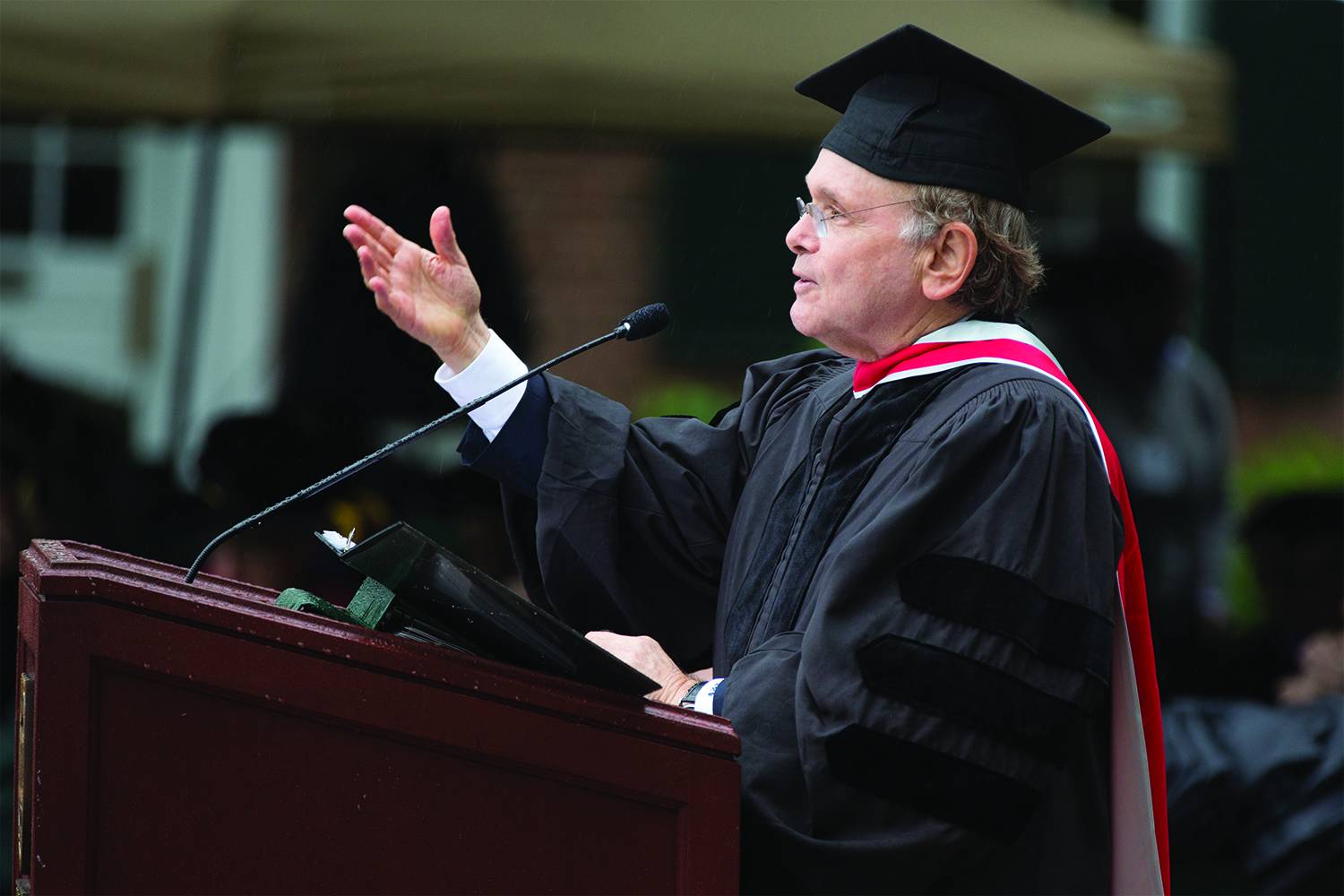 “Commanding Heights” author Daniel Yergin challenges Tuck graduates to rise to the occasion. “Rebuild the trust and reset the balance of confidence on which a growing global world depends.”

Confidence. A fitting theme for the main address at the 2016 Tuck Investiture ceremony June 11. But speaker Daniel Yergin, a Pulitzer Prize-winning author and one of the world’s foremost authorities on energy and the global economy, presented a new twist on the subject, highlighting the shift in confidence away from a globalized world—the very world for which Tuck's rigorous education has prepared the class of 2016.

“Here is the rub,” Yergin told his listeners under a collective dome of black umbrellas on this rainy afternoon. “Globalization is now under attack, a war is being waged against international commerce and trade, the market economy that generates the well-being of nations is now a source of deep and corrosive distrust, and business is vilified as an evil endeavor, with one exception—startups.”

Here, Yergin digressed to remind his audience of Dartmouth’s long tradition of entrepreneurs, including George Bissell D’1845, who was responsible for one of the greatest startups of all time, the world oil industry. Yergin, who holds a bachelor of arts from Yale University and a PhD from Cambridge University, is also a business leader, as vice chair of IHS, one of the world’s largest research and information companies, and founder of Cambridge Energy Research Associates, which became part of IHS in 2004.

Startups aside, Yergin emphasized how the balance of confidence—a confidence that reflects the respective weightings in people’s minds between the role of government and markets in the economy—has shifted dramatically away from the latter. Yergin cited a recent poll that found that 51 percent of American millenials do not support capitalism. “Confidence is the essential foundation of a market economy,” he stated. “When that confidence isn’t there, markets don't work.”

Referencing his book, "The Commanding Heights: The Battle for the World Economy," Yergin traced the shift from an era in which government sought to seize and control the commanding heights of the economy to the rise of free markets during the last century, as well as the process of globalization. (Yergin attributes the phrase “commanding heights” to Vladimir Lenin, referring to the control of perceived key segments of a national economy.)

So why the current hostility toward a global market that has yielded benefits in terms of economic growth and jobs, the flow of information and ideas, raised incomes and better lives, and more revenue for governments? Yergin outlined multiple reasons, starting with the financial collapse of 2008, which resulted in a dramatic loss of confidence in markets, and in the decision-makers. Yergin also cited a much greater focus on the complex issue of inequality, and a heightened sense of vulnerability to international trade and globalization.

Help rebuild the trust and reset the balance of confidence on which a growing global world depends.

“The great benefits of trade are spread across the nation, while the pains are felt in local communities and by people who have lost what they counted on as secure jobs and feel marooned,” Yergin pointed out. “Addressing the needs of those displaced by trade, and supporting them during the transition, is a vital ingredient of policy and to re-balancing confidence. But the answer is not to put up barriers to world trade, which has done so much to improve people’s lives.”

Lastly, Yergin attributed the shift in the balance of confidence to memory. He noted that much of his listening audience would have been about three years old when the Berlin wall came down, thus young adults have no direct understanding of what it meant when the mission of governments was to control the commanding heights.

“Obviously, regulation and rules are necessary for a market economy,” Yergin stated. “As a Russian economic reformer once said to me, ‘Without those rules and regulations, you don’t have a market, you have a bazaar.’ But I think the question that you will encounter in your careers,” he told his audience in Tuck Circle, “is what is the right amount, the right balance of regulation? What is the quality of the regulation? What meets the needs of public interest, and what stifles initiative, drains times, creates burdensome costs, and hinders growth?”

Yergin concluded his talk with a reminder to Tuck’s newest class that there is a trust they carry from here, and, with that trust, comes not one, but two opportunities. “The first is to find your way to meaningful, satisfying careers of leadership and accomplishment,” he said. “The second opportunity is created by ... what you demonstrate in your own careers and lives to help rebuild the trust and reset the balance of confidence on which a growing global world depends.”