Seemingly small moments and decisions become significant skills and experiences that culminate into your career journey. 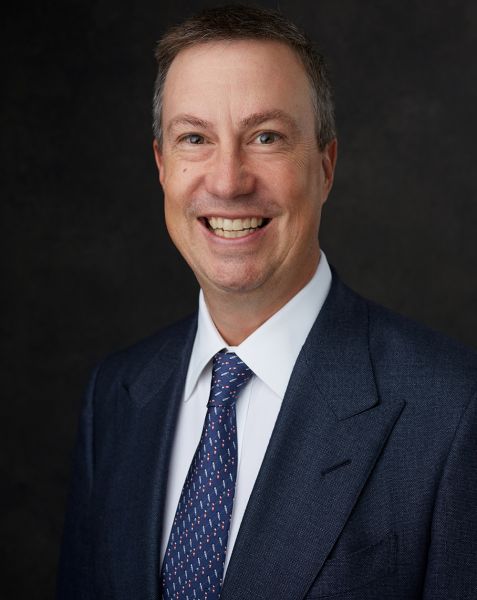 Born in Chicago, Lenhardt lived in Mexico City from age six to ten, where he gained fluency in Spanish. Eventually, Lenhardt headed to Ithaca, New York, to study government at Cornell University. He spent one year abroad at England’s Oxford University studying politics, policy, and economics, then graduated from Cornell in ’91.

Graduating amidst a recession, he landed a job at Merrill Lynch in New York working as an analyst in the corporate finance department. “Merrill Lynch taught me accounting and finance, and the importance of detail, but I looked at more senior people and realized the work life balance didn’t get better. I didn’t want to work 100 hours a week for the rest of my life,” he says. “I wanted to be involved with businesses and broaden beyond finance.”

Enter: Tuck. Lenhardt didn’t start at Tuck with a clear vision of his future career path, though he knew he was most likely heading to consulting. Lenhardt loved the “idyllic setting in Hanover, collegiate feel, and small class sizes.” Never one to take the expected route, Lenhardt saw his summer internship as an opportunity to not work in consulting, but rather gain exposure to the corporate world as an intern for Pinnacle Brands, a baseball card company. He graduated from Tuck in ’96 and entered the workforce as a consultant for Bain & Company in Dallas where they managed Latin American clients and his Spanish skills would be of value.

In his fourth year at Bain, after leading a team developing a turnaround strategy for PetSmart, he was offered an opportunity to join the senior team of the pet retailer, leading their pet grooming and training business. After six years in that role, next came “one of the most valuable career experiences I’ve had,” as he says. Lenhardt was immersed in store operations for the next 18 months, working first as a store manager and then as a district manager overseeing eight stores. “This experience put me on the front lines of the stores and I was able to see how everything we did at the corporate office affected the day to day cadence of a store and how it ultimately impacted the customer experience,” he says. “To the associates and the shoppers at the stores where I worked daily, that specific store represented the entire brand.”

With this impactful experience under his belt, Lenhardt was inspired to lead passionately and empathetically. Lenhardt became CEO in 2013, “As a CEO, you’re on a pedestal—there’s a lot of responsibility. Suddenly you’re the funniest person in the room,” he says “You need to develop a strong sense of self awareness.” Lenhardt learned that when he entered a staff meeting his mood set the tone for the entire meeting. “People are rightfully concerned about themselves, and I had to be conscious of my disposition. As an example, if I had a frown, people were concerned it reflected something about them.” Lenhardt learned to lead with positivity in order to build a successful team, saying “success in a leadership role is only as powerful as the team surrounding you—the goal is an independent, high-performing, committed team.”

Lenhardt’s career at PetSmart lasted 15 years, coming to a close when he stepped down as CEO in 2015. Lenhardt keeps a full portfolio both independently consulting and as a board member with multiple organizations nationally and local to Phoenix, his hometown. He’s also been engaged philanthropically at Tuck. Passionate about leadership, in collaboration with Dean Slaughter and Tuck professors, Lenhardt developed a leadership fund, The Lenhardt Family leadership fund, the first ever of its kind at Tuck.

As a believer in personal engagement in philanthropy, his involvement with the leadership fund goes beyond an endowment—he’s offering decades of personal experience and lessons learned in collaboration with Dean Matthew Slaughter and Tuck professors to adapt a curriculum and program to support Tuck students to become authentic and genuine leaders.

Lenhardt admits developing leaders isn’t a science, and there is no one-size-fits-all formula, but there are concrete steps to developing a personal leadership toolbox that feels genuine and true to you. Lenhardt is the first to recognize the challenges of leadership—he experienced feelings of isolation as CEO and struggled with relinquishing responsibility to his team. The goal of successful leadership is to develop and surround oneself with an “independent, high performing, and committed team,” he says. But to do that, one must develop an authentic and personal leadership style.

Here's how according to Lenhardt:

Do what you fundamentally enjoy. Knowing he was on track to become a consultant during his time at Tuck, Lenhardt saw the summer internship as an opportunity to amplify his experiences and gain exposure to the corporate world. He followed his passion for sports and accepted an internship in Dallas testing the viability of a new product at Pinnacle Brands, a baseball card company, in Dallas in ’95. Upon Tuck graduation, between his internship experience in Dallas, a fluency in Spanish from living in Mexico City from ages six to ten, and a diploma from Tuck, he was hired to join Bain Dallas as a consultant, where they managed all Latin American clients. Realizing he genuinely enjoyed working in retail through his involvement with PetSmart, he stayed for the tenure of his career—he loved watching customers see and feel a service and product.

Take risks, collect diverse experiences, and choose the unexpected route. “You never know how your choices will affect your path later on.” Lenhardt’s decision to join the senior team at PetSmart wasn’t without risk—in October 2000, the he stock at PetSmart fell to $2 a share right before he joined, in comparison to $40 a share several years prior, and many people felt the company was headed toward bankruptcy. “As a 31-year-old, you don’t get the opportunity to jump into a well-run business in a senior leadership role. You need to look for a business with opportunity,” he says.

Step out of your comfort zone. After working on the turnaround strategy with Bain, Lenhardt was offered a role on the senior team at PetSmart in 2000, with the opportunity to lead their grooming and pet training businesses. “As a consultant, you get to advise and develop strategies, but I was excited to take ownership and execute,” he says. After doing this for six years, he embarked on a store development experience. This entailed being a store manager for several months, then a district manager; overseeing eight stores. His initial reaction to this was “abject fear,” as he had no previous experience working in retail. “I wondered if I could do it,” he says. This experience stretched him. “It was completely different, and therefore scary. It exposed me to new experiences and allowed me to continue to grow at PetSmart.”

Practice every day—leadership is a contact sport. “There are opportunities to engage in leadership each and every day, regardless of what you do. Look for opportunities to inspire and engage with your team,” Lenhardt says. He credits his strengths in collaboration and his team-based approach to his time at Tuck, and encourages students to take leadership roles in class and team projects. Like any skill, leadership weakens without practice. Ask for feedback to build self-awareness. The more responsibilities he gained, the harder it was to receive honest insights. “As CEO, people often tell you what you want to hear. Develop an inner circle, person-ally and professionally, of individuals who share truthful feedback.”

Improving Financial Health in the COVID-Era

Prudential President Jamie Kalamarides T'94 on how to improve your financial health during the COVID-19 era.

As a career coach and host of the An Interview with Melissa Llarena podcast, Melissa Llarena T’10 is driven by helping marketers and creative professionals rediscover their sellable strengths.

How to Create a Customer-First Culture

Alison Elworthy T’11, SVP of customer success at HubSpot, offers advice on how to put customers first—no matter the size of your organization.

As the vice president for Latin America and the Caribbean, Andrei Belyi T'01 leads TechnoServe’s mission of providing business solutions to poverty in 11 countries.

On the Rewards of Nonprofit Board Service

Amy Houston T’97 was inspired to attend Tuck after seeing firsthand how a board with for-profit management experience can help a nonprofit, and she kept this lesson in mind when she joined the Robin Hood Foundation.